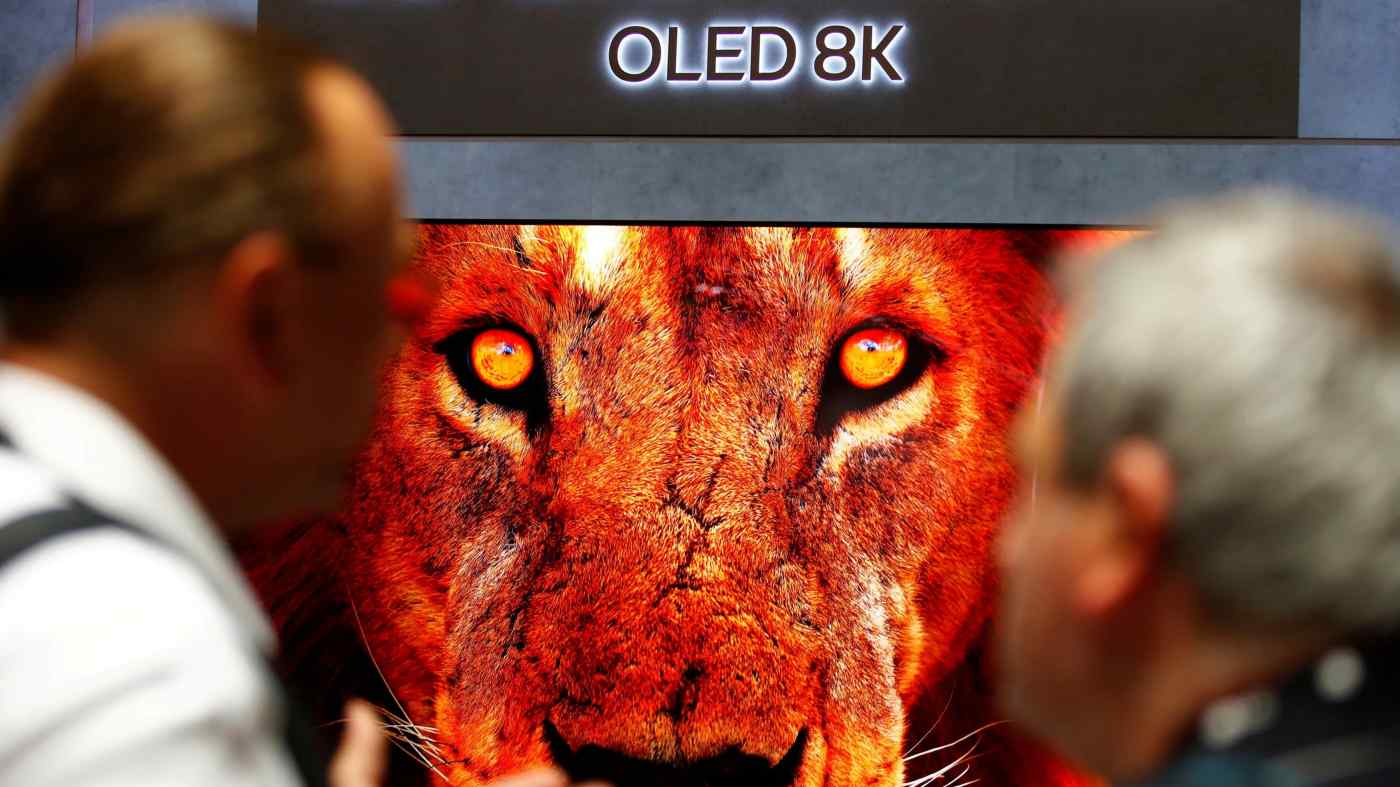 SEOUL/TAIPEI -- Samsung Display and LG Display are racing to stay ahead of their Chinese rivals as a supply glut of LCD panels accelerates the shift to next-generation displays.

This downturn has taken a heavy toll on Samsung and LG, for whom LCDs were once a cash cow. Now they are hoping to consolidate their lead in OLED panels, which are more expensive to make but potentially more profitable.

OLED displays boast higher color contrast and deeper blacks than their LCD counterparts, and they are also flexible.

The market for these advanced displays is expected to grow rapidly, rising from last year's $25.5 billion to more than $30 billion this year, according to IDTechEx Research.

The transition to more advanced panels has not been painless -- or cheap. LG Display, a supplier to Apple, announced earlier this week that CEO Han Sang-beom would resign to take responsibility for poor earnings due to LCD woes. The company's operating loss in the second quarter widened to 369 billion won ($313.02 million), from 228 billion won a year earlier.

The following day it announced it would cut its workforce, with some analysts estimating as many as 5,000 employees could be let go.

"LG Display plans to stop operation of its LCD production gradually in the fourth quarter," said Chung Won-seok, an analyst at Hi Investment and Securities. "The company also aims to cut about 5,000 employees to lower costs."

LG Display acknowledged that it is considering many options as it shifts its key business from LCD to OLED, but said nothing has been decided yet regarding production cuts. However, the company confirmed that it will accept applications for its early retirement program starting next week.

"We need to adjust our workforce as our business structure is changing," said Lee Hyung-kook, a spokesman for LG Display. "But we did not set the target of numbers for the [voluntary retirement ] program as it will be applied only to those who want it."

Samsung is also trimming down its LCD operations.

"We are cutting production of LCD panels. The market situation is too bad," said a source at Samsung Display. "Increasing stocks are burdening us. We believe it is time to adjust production and wait until panel price rebounds."

The source declined to reveal how much production Samsung has cut, but analysts estimate it to be 120,000 units per month, or one-third of the company's total LCD production capacity.

The company is expected to shed outdated production facilities.

"Samsung Display is expected to eventually sell its defunct 8.5-generation LCD lines in [the city of] Asan, as it has realized that it is impossible to compete with China's 10.5-generation lines," said Kim Dong-won, an analyst at KB Securities.

The different generations of LCD panels refers to their size -- the later the generation, the larger the panels, which are proportionally more challenging to produce. The most advanced generation currently in production is 10.5.

Yonhap news agency on Tuesday reported that Samsung Display plans to invest $11 billion to upgrade one of its domestic LCD facilities to produce "more advanced" displays. A spokesperson told the Nikkei Asian Review that "nothing has been decided" regarding the investment, but said company is working on producing an even more advanced type of OLED.

BOE's plant can produce LCD sheets measuring 2,940 by 3,370 mm, enough to make eight 65-inch TV panels. This is markedly more efficient than Samsung's 8.5-generation line, which can make only three pieces of the same size panel from sheets measuring 2,200 by 2,500 mm, Kim at KB explained.

LG Display is hoping it will be able to compete on technology rather than price. The company announced last month that it had begun producing 8.5-generation OLED panels in Guangzhou, China, as part of its goal of producing 10 million large-size OLED panels per year.

"LG Display, the pioneer and only manufacturer of large-size OLED panels in the world, plans to further widen the gap with its competitors and strengthen its leading position starting from the operation of its Guangzhou plant," said the company in a statement.

Despite the hefty investment required -- LG says it has invested 20 trillion won in OLED facilities -- analysts see the shift to OLED as a step in the right direction.

"I think it is positive that LG Display is changing to an OLED company by cutting its LCD TV business step by step," said Chung Won-seok, an analyst at Hi Investment & Securities. "Its valuation will increase. The OLED TV sector will account for 56% of its TV sales in 2020 thanks to the business restructuring."

"We assume that Samsung Display will invest in QD OLED in the fourth quarter, and the size of the investments will increase further," said Kim at KB, referring to quantum dot OLED technology, which Samsung is studying for a potential next-generation display. Quantum dots are tiny particles that have excellent photonic emission properties.

BOE, however, is also working on its own OLED operations in hopes of eventually supplying the displays to Apple, as the Nikkei Asian Review reported. The company could pose a real challenge to its South Korean rivals if it gets the green light to supply the U.S. company.

Samsung and LG are not the only ones hit by the LCD glut. Taiwan's Chunghwa Pictures Tube, a small display maker founded in 1971, went bankrupt on Wednesday, having dismissed more than 2,000 employees last month following years of losses. AU Optoelectronics and Innolux, the island's leading display makers, both struggled to turn a profit in the first half of this year, and Japan Display is also struggling financially.

"The display industry enjoyed a temporary bounce back in 2017, but the industry was quickly plunged into a downturn from 2018 after many Chinese companies brought new capacity online to expand their market share with cheaper prices," said Tseng Chun-chou, senior industry analyst at the Taiwan Institute of Economic Research.

"The Chinese companies' goal is to grab their share in the global display industry. They care less about losing money," an executive at a Japanese display equipment supplier said.

But this approach is taking a toll even on China's BOE, CSOT and HKC, which have reduced their production. Sakai Display Products, which was previously backed by Foxconn founder Terry Gou, has paused plans to bring its new advanced display plant in Guangzhou up to full production capacity due to the supply woes, the Nikkei Asian Review reported.

"The capacity reduction across companies is a positive direction for the display industry, it could help shrink the scale of the falling prices in the market," Tseng said. However, the analyst said it still depends on whether Chinese players once again start ramping up capacity.