The next iteration of the ThinkPad is expected to be the world's first foldable PC when it hits the market later this year. (Photo by Yuki Kohara)
AKANE OKUTSU, Nikkei staff writerJuly 14, 2020 14:32 JST | Japan
CopyCopied

YOKOHAMA, Japan -- "Our core philosophy is to free work from the office," said Minoru Yasuda, executive director of PC maker Lenovo Japan, in May as he unveiled new products targeting remote workers in the novel coronavirus era.

Lenovo Group is about to bet big on that philosophy with the launch of its flagship new product for this year -- a PC with a foldable screen and detachable keyboard called ThinkPad X1 Fold. The device was planned and designed long before the pandemic severely reduced global travel and forced businesses worldwide to reorganize work practices.

As the world's biggest PC maker, Lenovo hopes to benefit from the post-pandemic era. Its chairman and chief executive, Yang Yuanqing, recently said a global shift to working and studying at home was "significantly enlarging the overall PC category," estimating that the total available market would increase by up to 30% in two or three years.

Others are less convinced that the market is in for a permanent boost. "We believe the sudden laptop demand is temporary, as a quick response to stay-home orders," said Mikako Kitagawa, Gartner's research director.

Lenovo has a lot riding on PCs. While its software and services revenues are growing, almost 80% of company revenue in the year to the end of March 2020 came from PCs and smart devices. Annual sales of 50.7 billion dollars were down by just 0.6% compared to the previous year despite supply chain disruptions in the first months of 2020, supported by healthy growth from PC sales.

Last year's increase was driven largely by demand for upgrades from Windows 7, which is no longer supported by Microsoft. Without that boost, the PC market is predicted to face broader challenges from other devices.

Even with the impact of working from home on IT equipment demand, Kitagawa noted in an April report that there are also downsides because of the economic strain that the coronavirus pandemic has wrought. "We'll start seeing enterprises and consumers alike extending their PC life cycles on a more permanent basis as they focus on preserving cash," she said.

It is in this environment that Lenovo plans to launch the X1 Fold, with a starting price tag of $2,499. The device looks like an ordinary tablet but its OLED display can be folded and used at either half size or opened into a 13.3-inch screen. It also has a USB port and detachable keyboard. Lenovo has not given a date for the launch. The product is the brainchild of Lenovo's Yamato Laboratory in Yokohama, which was set up by IBM in 1985 and was at the core of the company's development of the ThinkPad, launched in 1992.

Lenovo inherited the lab after it bought IBM in 2005. The company helped overcome the unease of some staff by investing more to turn Yamato into one of the company's three main research and development hubs. Yamato has remained central to the direction of the ThinkPad, which has sold over 100 million units since its launch.

Yasumichi Tsukamoto, Yamato's director, and his team started to imagine how PCs could be reinvented. "We were talking about dream ideas," Tsukamoto said. "If we could fold PC displays, we would be able to carry them in smaller forms."

While PC makers have explored new designs such as tablets and two-in-ones that can be used both as a tablet and a laptop with a keyboard, these new forms have failed to show significant growth. According to research company IDC, global tablet shipments showed a 1.5% decline in 2019 compared to the previous year. Apple has arguably been the winner in tablets, as it accounted for about 35% of the market in 2019, when its shipments grew, according to IDC. A shift to remote work aside, Tsukamoto believes customers are returning to laptops because they want the keyboards, while two-in-ones tend to be used just like a normal PC because customers keep the keyboards attached.

The X1 Fold will be 5G compatible, which Tsukamoto argues is important to persuade people to favor small, portable PCs over smartphones. He also believes that while ThinkPad has traditionally been for business users -- who still account for 85% of the brand's sales -- consumers are increasingly choosing PCs for watching movies and other entertainment.

Dell and Intel also showed concept foldable PCs at CES 2020, one of the year's showpiece technology events before the coronavirus pandemic.

"I admire [those companies] even though current versions may not be practical yet," Gartner's Kitagawa said. "To revive the market, new [designs] have to offer excellent user experience and be useful."

Jeff Lin of Omdia, a London-based consultancy, suggested that "foldable PCs can meet the needs" of consumers for using two screens simultaneously for cross-checking and during online meetings. However, Lin predicted that it would take until 2023 for foldable PCs to take off. 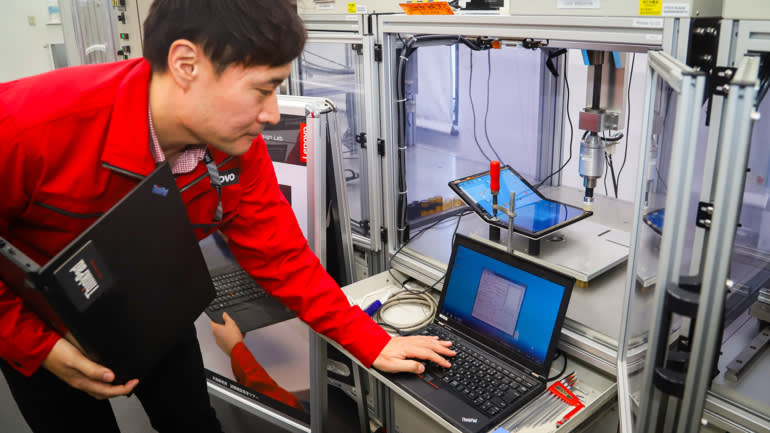 The durability of foldable PCs is tested in Lenovo's Yamato Lab. (Photo by Yuki Kohara)

Lin also said that if Lenovo could strengthen its brand image by delivering more creative and innovative products such as foldable PCs, it would help bolster its position in China. He said the U.S.-China trade tension could cause the Chinese company to lose market share among American consumers.

Last year, Samsung Electronics and Huawei Technologies launched foldable smartphones, but the initial rollout was less than impressive. Samsung's Galaxy Fold raised doubts about the technology when reviewers reported faults with the display. The company made a second attempt with the launch of another foldable, the Galaxy Z Flip, in February.

Tim Bajarin, president of Silicon Valley-based market research firm Creative Strategies, said a folding PC design "has been coveted by many mobile users for decades." But even though other PC makers "had folding screens to work with, getting the folding mechanisms and hinges right proved to be a real challenge."

As part of Yamato's tests for the X1 Fold, samples were folded and unfolded repeatedly for four days, and subjected to shock and pressure tests.

A shake test was added when the team discovered that the product frequently broke when U.S. students carried them in backpacks stuffed with books.