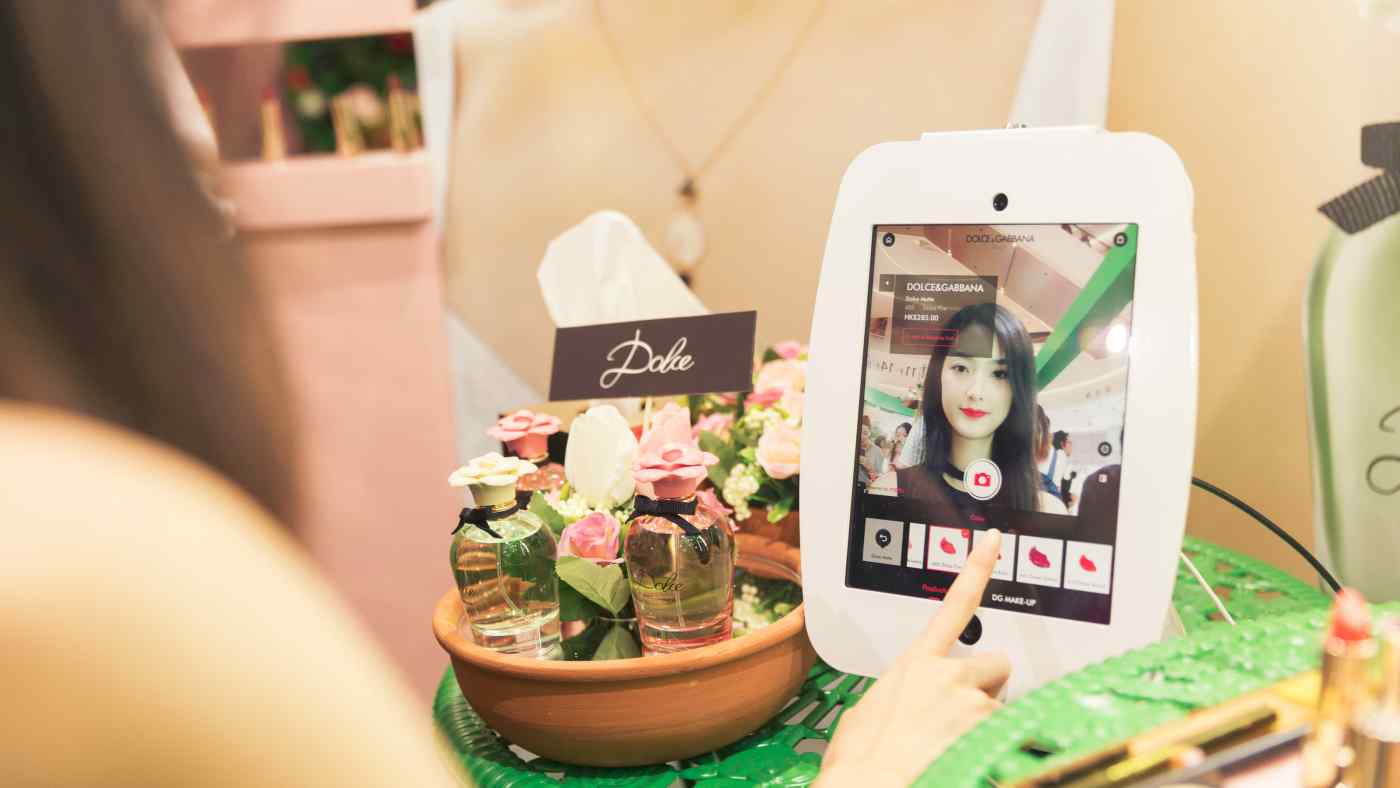 Meitu is seeking a way in with traditional retailers via its Magic Mirror, which allows shoppers to see how they would look wearing different cosmetics. (Courtesy Meitu)
MICHELLE CHAN, Nikkei staff writerJanuary 1, 2019 16:33 JST | China
CopyCopied

Two years after listing in Hong Kong at a value of more than $4 billion, however, loss-making Meitu is going for its own makeover by transforming its flagship photo app into a social media platform and licensing its core hardware business to smartphone heavyweight Xiaomi.

Meitu's apps have 350 million monthly active users, largely women aged 18 to 34 who use the editing tools to make their faces slimmer, skin brighter and limbs longer in photos. Despite those numbers, the company only generated about one-third of its revenue from app-related internet services, such as ad placements, in the first half of 2018. Meitu, which means "beautiful pictures" in Chinese, made most of its revenue from selling smartphones it developed that are fitted with high-quality cameras with editing functions that can enhance photos.

Now, to boost advertising revenue, Meitu has turned to social media. "There is limited advertisement space in photo-editing apps, but there is no upper limit of such on social networking platforms, as people keep refreshing their page for new feeds," Bryan Cheng Yu, Meitu chief operating officer, told the Nikkei Asian Review in a recent interview.

Social media also offers a trove of information about its users, including their interests and habits, Cheng added. "This would allow us to place ads more precisely and provide more value-added insights to marketers." Meitu also hopes to lure users to paid services like online games and e-books.

Cheng joined Meitu a year ago from China's top microblogging platform Weibo, with a mission to lead the company's social media shift. He said he sees a gap in China's social media scene that Meitu can fill. "We have WeChat, China's answer to Facebook, and Weibo, China's Twitter equivalent. But we do not have a photo-driven platform similar to Instagram," Cheng said.

Two months after the revamp of Meitu Xiuxiu, an app that incorporates photo and video-sharing capabilities into the company's photo-editing interface, close to 51 million accounts, or 44% of the app's users, have become monthly active users of Meitu's social platform. There are also "better-than-expected increases in user time spend and engagement level," according to Cheng.

But the transformation comes as Meitu is facing challenges in retaining monthly active users for its range of apps. These have dropped 16% in the first six months of this year, as its short-video app Meipai was removed from the Apple store in March and June due to the appearance of inappropriate content.

Investors are also unconvinced by Meitu's ambition to become "China's Instagram," especially after the company said during a briefing about its interim financial results this year that it will not "emphasize net profit generation" over the next 18 months, but will prioritize "driving growth in active users" instead.

Its shares have tumbled more than 80% since the beginning of this year, compared to a 28% slide in the MSCI China Information Technology Index so far this year. Roughly $11 billion has been wiped from its peak market capitalization, prompting the company's billionaire chairman, Cai Wensheng, to step up share buybacks in recent months. Cai and Meitu CEO Wu Xinhong now hold a combined stake of over 40.5%, up from 39.1% in December 2017.

Meitu attributes its mounting losses to the cutthroat competition in China's saturated smartphone market, where bigger brands such as Vivo and Oppo are introducing similar photo-enhancing features and selfie-friendly cameras to target young women. Meitu released five smartphone models in 2017 but only managed to launch one this year. Its average selling price and gross profit are also on the decline.

This left Meitu no choice but to get rid of the struggling smartphone business. Last month, it announced a strategic partnership with Xiaomi. The world's fourth-largest smartphone maker will take over the research and development, production, business operation, as well as sales and marketing of Meitu-branded smartphones. In exchange, Meitu will get 10% of the gross profit from each Meitu smartphone sold in exchange for image-related algorithms and technologies.

"Meitu knows well that its smartphone business will no longer be profitable, it would rather focus on social media and internet services that bring higher margin," said Flora Tang, a technology analyst at Counterpoint Research.

While the gross margin of its internet business reached over 40% over the first six months of 2018, that of hardware stood only at 27%, according to Meitu's financial report. Analysts at Huatai Financial Holdings also noted that the partnership with Xiaomi would "help Meitu completely adopt an asset-light model" by slashing operating expenses.

Although Meitu can gain from profit-sharing with Xiaomi, the smartphone segment is unlikely to be a major revenue contributor going forward. "Xiaomi capped its net profit margin at 5% on hardware. It's easy to imagine how little Meitu is able to get," Tang said.

Huatai Financial Holdings forecasts that internet services would make up almost 95% of Meitu's revenue in 2020, the year it expects the company to turn a net profit.

To diversify its revenue stream, Meitu is also increasingly seeking partnerships with traditional retailers on its new product, Magic Mirror. These are placed in brick-and-mortar stores, letting shoppers try on makeup virtually and receive product recommendations based on how they edit their selfies in Meitu's apps.

Magic Mirror already counts retail chains such as Sephora, DFS and CK Hutchison Holdings' Watsons as its first customers. "With over 6 billion portraits uploaded on Meitu's server each month, we can monetize these unique data regarding people's facial features," said COO Cheng.

But data is where Meitu faces its next challenge. China's national consumer watchdog has criticized the company for "gathering excessive personal information," including users' biometric and financial information. Investors, already frustrated by the persistent losses, are now fretting about tighter regulations in China's technology sector. Meitu's strategic shift suggests China's selfie service needs more than a superficial touch up to win back their confidence.