A man uses a smartphone in Hanoi as he walks past a poster warning against spreading "fake news" on the coronavirus.   © Reuters
LIEN HOANG, Nikkei staff writerSeptember 10, 2020 23:52 JST | Vietnam
CopyCopied

HO CHI MINH CITY -- The Vietnamese government and Microsoft have stepped up their partnership in cybersecurity, announcing Thursday that state agencies and companies are taking part in the seminar on cybersecurity offered by the U.S. software company.

In December last year, the Vietnamese government announced that it was signing up for Microsoft's Government Security Program, which provides training and cyberthreat updates compiled by the company from around the world.

"The power of cloud computing, big data and artificial intelligence has proved effective, and not only in the field of security -- and enterprises should start really researching and applying these technologies to grow more efficiently and securely," said Microsoft Vietnam General Director Pham The Truong at the Hanoi event.

On average, Microsoft has provided Vietnamese authorities with 3 gigabytes' data per day on domestic malware threats and other security issues since the program began. Vietnam had the highest rate of ransomware infections in Asia in 2019, Microsoft said, delivering its latest report on the country's cyber landscape.

The number of "drive-by" attacks, which involve criminals remotely planting malicious code on unsecured devices, is twice as high in Vietnam as the global average, Microsoft said. Bootleg software has long been rampant in the country, opening the door for hackers who use infected computers to launch internet attacks around the world. The Mirai botnet, which brought down the websites of U.S. cable TV content producer HBO and electronic payment service PayPal in 2016, for example, relied heavily on Vietnamese devices, which typically belonged to unwitting owners.

Analysts say the partnership, which lets Vietnam access Microsoft's source code and threat intelligence, gives the U.S. company a chance to scoop up contracts for its cloud computing, antivirus, and other services. Southeast Asia is the world's fastest-growing market for cloud services and is projected be worth $76 billion by 2023, according to market researcher IDC.

Microsoft is one of many U.S. companies, ranging from discount retailer Target to video sharing site YouTube, which are investing more in Vietnam as relations with the U.S. improve. At the same time, Hanoi is being cautious due to fraying ties between the U.S. and China. Vietnam's northern neighbor is its biggest source of imports and a major investor in the country. 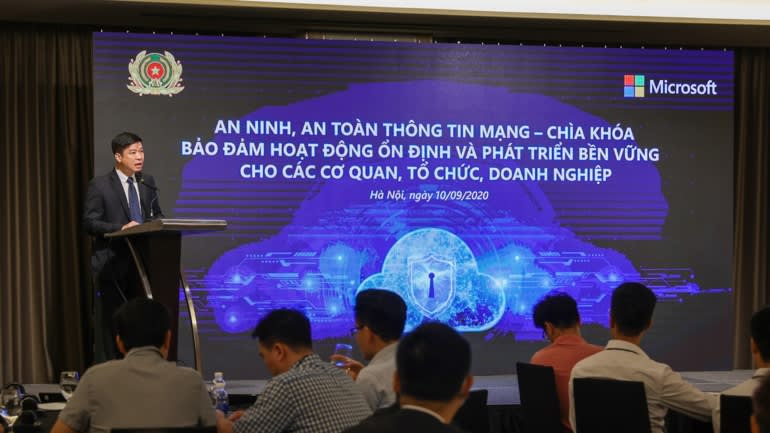 Pham The Truong, general director with Microsoft Vietnam, speaks at a cybersecurity event in Hanoi on Sept. 10.

The rivalry between China and the U.S. has also wafted into the cloud. All the major services are increasing their spending in Southeast Asia, with China's Alibaba Cloud claiming the most data centers and Amazon Web Services of the U.S. raking in the most revenue.

But Microsoft has an early-mover advantage in Vietnam, having arrived in 1992. The government requires foreign companies to store data locally under a 2019 law that is similar to legislation in China. Although it has partnered with Microsoft, Vietnam is also pressing domestic companies from Viettel, a military-run telecommunications company, to VNG, the country's most valuable startup, to build more of their own cloud infrastructure and to cut their reliance on foreign suppliers.

"The fact that they have managed to secure the Vietnamese government in this kind of partnership is another example of their focus on Asia, Southeast Asia in particular," Yap, who advises foreign investors, told the Nikkei Asian Review.

Vietnam is not just playing defense. Internet security company FireEye said the country "carried out intrusion campaigns against Chinese targets" in January "to collect intelligence on the COVID-19 crisis," in addition to targeting critics of the state.

Vietnam has denied the reports, but they are just one example of how the pandemic has further complicated global cybersecurity. Problems range from nation-states hacking medical researchers in hopes of coming up with a coronavirus vaccine, to unsecured home offices becoming targets for attack.

In shoring up its defenses, Vietnam has consulted Microsoft's databases, determining, for example, that there are 3.8 million infected devices in the country, Cuong said. Officials use the data to check the IP addresses of infected devices, the malware involved and connections to devices abroad.

"In the current state of cybersecurity, global data and knowledge are key," he told Nikkei.