Acquiring the viral app will not be easy, with or without Trump trying to take a cut 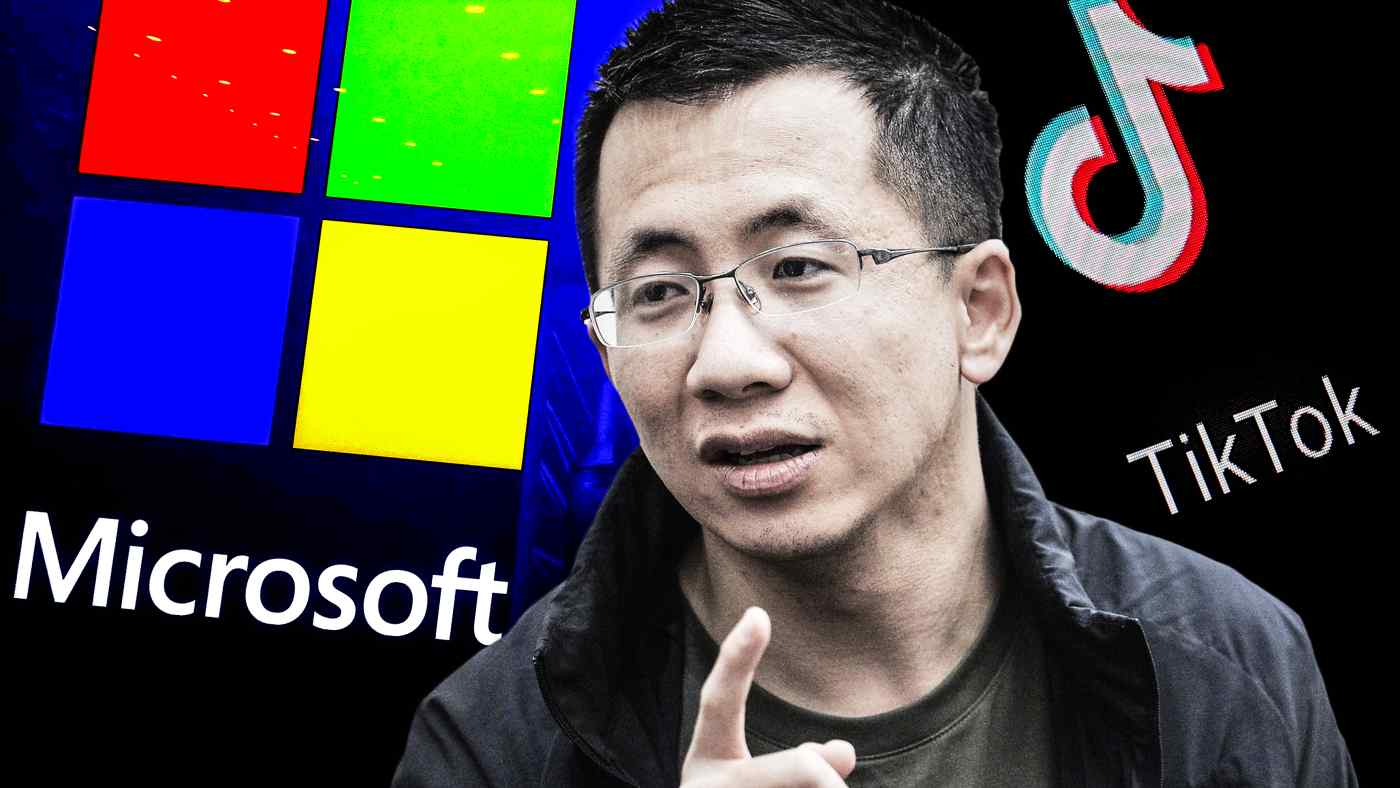 PALO ALTO, U.S. -- Microsoft and TikTok have a deadline of Sept. 15 to reach a deal on the latter's acquisition before the wildly popular short video is shut out of the U.S. But with the clock ticking, numerous questions and roadblocks remain, including what exactly the software giant is trying to buy from TikTok's Chinese owner ByteDance and whether the Trump administration will allow the deal to go through.

ByteDance's founder himself has expressed skepticism about the whole process.

In an email to his China-based employees on Tuesday, CEO Zhang Yiming said the real goal of the U.S. government is not to force the sale of TikTok, but to ban the app outright for geopolitical reasons.

The Committee on Foreign Investment in the U.S., or CFIUS, has ordered ByteDance divest TikTok's U.S. operations, which the company acquired back in 2017, when it was called Musical.ly. However, President Donald Trump said on Monday that he will only give TikTok until Sept. 15 to find an American buyer or he will ban the app.

"The real problem is not CFIUS forcing us to sell TikTok to an American company using the Musical.ly acquisition posing national security risks as the excuse, which is unreasonable but is still due process, and as a company we have no other option but to obey the law," Zhang said in an internal memo obtained by the Nikkei Asian Review.

"However, this [forced sale] is not their real goal. They even do not want to see that happen," Zhang said, adding that the company is targeted by Washington because of the rising anti-China sentiment in the U.S.

"It is understandable that ByteDance is questioning whether the U.S. government does want to see the deal happening [as] 45 days is a bit of a stretch for reaching a deal this size and with such complexity," said a Beijing-based venture investor who specializes in the consumer and media sector.

"For cross-border deals like this, a CFIUS review alone would normally take 90 days," said Ye Jun, a partner at Chicago-based law firm Getech Law specializing in corporate and patent law. In an announcement on Sunday, Microsoft and ByteDance said they have already notified CFIUS about the potential deal.

A little over a month might not be enough for Microsoft and ByteDance to sort out the price and other terms "especially when they probably haven't figured out what they are selling and buying," the venture investor added.

And that is another factor complicating a potential deal: The enterprise giant is not buying TikTok, but its "service in the United States, Canada, Australia, and New Zealand," which is much more complex than purchasing an entire application.

"How do you divide a global social media app by regions? And after the sale, how do you handle the competition and cooperation between the same app in different regions owned by different companies? These hard questions needed to be answered before they can reach a deal to avoid future legal and business disputes," Ye said.

Moreover, what Microsoft is trying to acquire from ByteDance and TikTok is more than just some offices and a certain number of employees. It is also after the key to the app's success -- its algorithm.

"What makes TikTok TikTok is the core algorithm that was generated by ByteDance," said Dan Ives, managing director at Wedbush Securities. Changing the algorithm "would be like buying a Ferrari and changing out the engine."

TikTok, like its Chinese version Douyin, and Jinri Toutiao, a news app that generates a tailored list of articles and videos based on individual users' reading habits, all have personal recommendations to thank for their success, a feature that is powered by ByteDance's proprietary algorithms.

"A different company might trademark TikTok on their own, and they [probably] would not want TikTok to have its original features such as the 'for you page,' which made TikTok really popular in the first place," said 16-year-old Arushi, an avid TikTok user.

"It would definitely affect my user experience if TikTok is changed once it gets sold to another company," he added.

But as much as TikTok users and Microsoft would like to include ByteDance's algorithms as part of the deal, the Trump administration could reject that idea.

"The black-box nature of the algorithms the app uses has raised fears that it could easily censor content disliked by the Chinese government, or promote content that it favors, perhaps even influencing U.S. elections," Dan Wang, a technology analyst at Hong Kong headquartered Gavekal Research, said in a note to clients.

Moreover, machine learning-powered algorithms need to be constantly fed with user data to study and predict users' needs and then make recommendations accordingly. But as TikTok and its Chinese owner's access to U.S. consumer data remains the biggest concern for Washington, it is unclear how a Microsoft-owned TikTok would be able to leverage ByteDance's algorithms without supplying it with user information.

"From an algorithm perspective, ByteDance is going to have to be somewhat involved, at least in the handoff to Microsoft in the first 12 to 18 months. And these are all technology issues that Microsoft needs to work out to make sure it could happen while the deal is still green lighted from the White House," said Ives at Wedbush.

"I think the deal would most likely be a licensing deal: ByteDance licenses out their algorithms for Microsoft to use in the four countries they acquired TikTok's operation," said Ye at Getech Law, adding that how to patent and protect its proprietary algorithms in different regions would be a key issue for ByteDance.

On top of the political uncertainty, tight deadline and complex tech issues, the pricing could also be a sticking point in the deal.

Media reports say some investors are valuing TikTok at about $50 billion, citing people familiar with the matter. However, the wildly popular video-sharing app could be valued at over $200 billion in the next three years given its growth potential, Ives at Wedbush estimates.

In an internal memo Zhang sent out to all employees on Monday, he said the company "will not give up exploring all the possibilities," but added that it is "in a preliminary discussion with a tech company on possible collaboration to figure out a way to ensure that TikTok could continue serving U.S. users." The memo did not name Microsoft.

"Based on the two letters Zhang sent out this week, it seems ByteDance is still hesitant about giving up TikTok entirely and is hoping to 'collaborate' with Microsoft to maintain some kind of control of the app," the Beijing-based venture investor said.

"TikTok is still scaling and a sale now will be much less profitable than, say, two or three years later when it reaches its peak valuation."

"But if a sale can avoid the U.S. ban, the choice is obvious," he added.

By April, TikTok, combined with its Chinese version Douyin, had been downloaded more than 2 billion times globally, according to market intelligence firm Sensor Tower. In the first quarter, it generated the most downloads for any app ever in a quarter, making TikTok the fastest-growing social media app in the world.

In July, TikTok and its Chinese version Douyin recorded with more than $102.5 million in revenue from in-app user spending, 8.6 times the amount in July 2019, according to estimates by Sensor Tower.

The short-video app's growing direct reach to global consumers is exactly what Microsoft needs. As a company centered on enterprise software, Microsoft's consumer-facing products are currently limited: it only has Bing for search, LinkedIn for professional networking, and Xbox Live for gaming. "TikTok would immediately give Microsoft consumer content credibility while moving the company more squarely into Facebook's territory and thus opening up a potentially substantial advertising revenue stream," said Dan Romanoff, an equity research analyst at Morningstar.

For the growth and revenue potential TikTok presents, Microsoft is likely to present a fairly attractive offer to ByteDance, but "if the plug gets pulled on Sept. 15, the value of [TikTok] will go down 60-70% that day," said Ives at Wedbush.

And as difficult as it already is for Microsoft and ByteDance to reach a deal, Trump complicated matters even further when he said on Monday that the U.S. should receive a "substantial portion" of the TikTok sale.

"I did say that if you buy it, whatever the price is that goes to whoever owns it, because I guess it's China essentially ... I said a very substantial portion of that price is going to have to come into the Treasury of the United States because we're making it possible for this deal to happen," Trump said in a press briefing.

Legal experts said it remains unclear how the U.S. government can receive part of the purchase price.

"Unless President Trump was talking about the tax, otherwise I don't know what he was referring to and don't think there is any legal ground for the U.S. government to collect such a 'fee,'" said Ye at Getech Law.