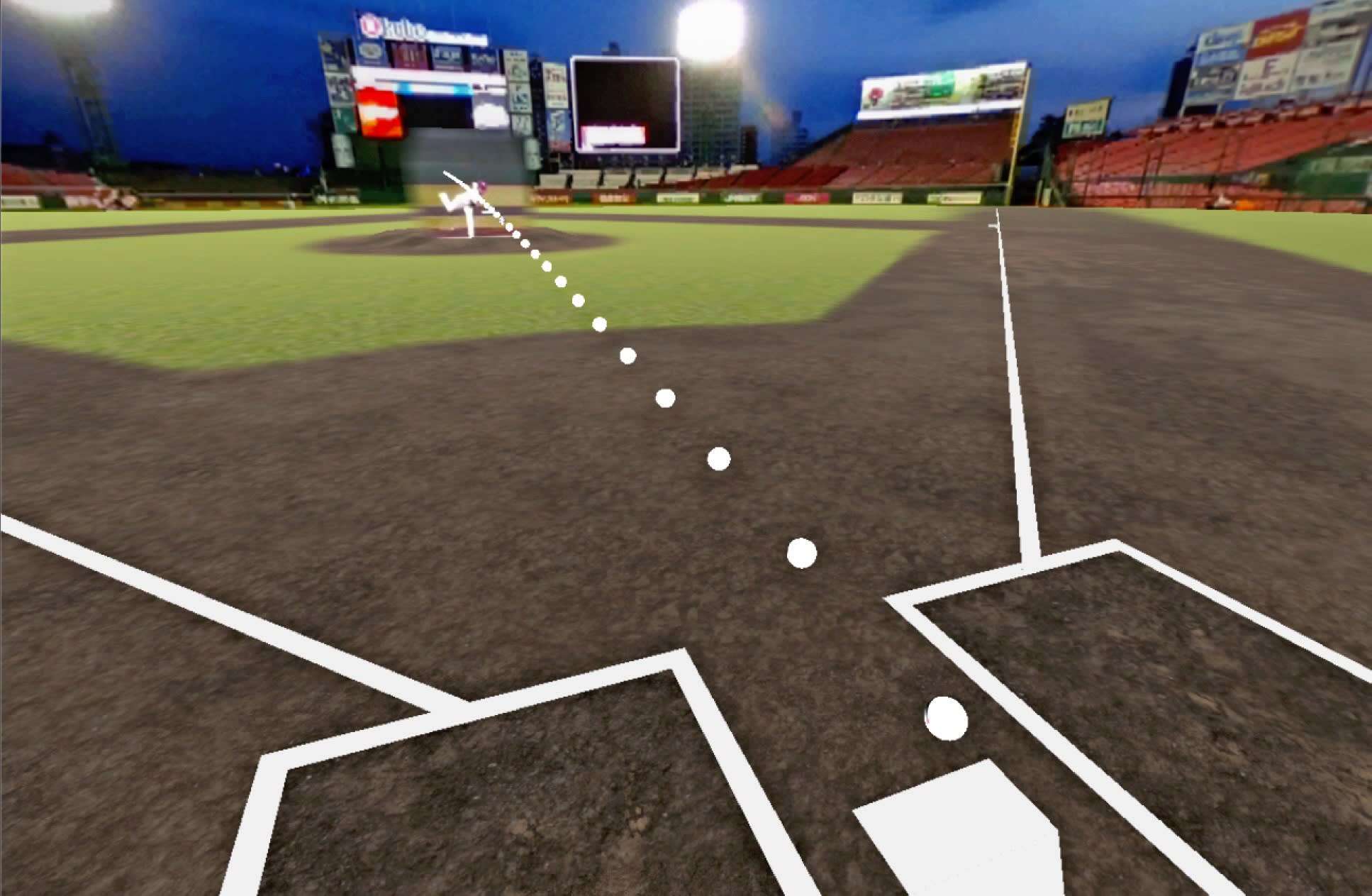 A virtual pitch crosses the plate in NTT Data's new VR batting practice system. After the pitch, the user can review the trajectory of the ball on the screen.

TOKYO-- NTT Data has developed a virtual reality batting-practice system that recreates the experience of standing in the batter's box and facing a pitcher so faithfully that even professional baseball players find it useful.

In fact, the VR system is so good that the Tohoku Rakuten Golden Eagles, a Sendai-based team in the Nippon Professional Baseball league, plans to incorporate it into its practice regimen as early as next year.

NTT Data is already looking at promoting the system in the U.S. as well.

That move is interesting even if you're not a baseball fan, because NTT Data is in the process of acquiring the information technology services division of U.S. computer company Dell.

NTT Data is already among the world's largest systems integrators, but its new VR system could help significantly boost the Japanese company's name recognition and add luster to its brand in the U.S.

The head-mounted display immerses the player in a virtual reality that recreates the experience of standing in the batter's box and watching the pitcher wind up and deliver.

What sets this system apart is that it reproduces the experience to such a high level that even professional baseball players can use it for practice.

"When you use this, everything is different from the first at-bat," said Golden Eagles star Toshiaki Imae.

The Golden Eagles were set to play the Hokkaido Nippon-Ham Fighters, and the starter was to be Luis Mendoza, who is known for his "two-seam" fastball that changes course slightly just when it reaches the batter. The ball moves at the same speed as if it is going to go straight, but instead of the sweet spot, batters hit it off the label of the bat.

Imae, knowing he would be up against Mendoza, and having seen lots of fastballs in past at-bats against Mendoza, wanted to use the VR system to check the movement of the ball to prepare for the game.

Rakuten Baseball has a trove of data about pitchers in both the Central League and the Pacific League of Nippon Professional Baseball, including video clips and records of their pitches and ball speeds.

The system recreates not only the ball position and speed, but also the quirks that set pitchers apart, like their breaking balls and ball trajectories.

The upcoming 2020 Tokyo Olympics has animated Japan's sports market, and NTT Data hopes to tap into that excitement by modifying its VR system for other sports as well, such as tennis.

But the company has also set its sights on the U.S. market.

NTT Data's U.S. subsidiary is currently in the process of selecting a leader to manage a sports business, which would include local sales of the VR batting practice system.

"The U.S. market is huge, and our goal is to convince MLB to use the system, not only for batting practice by the players, but also as a service for fans at the parks," said a department director at NTT Data.

There is more at stake than sales of this one system, however.

NTT Data's name recognition is still low in the West and it is lagging well behind its rivals. The company is nearing completion of its acquisition of Dell's IT services division, and when that happens its balance sheet will suddenly show a far larger amount of foreign sales. By promoting the VR system at the same time, it aims to bolster its brand image.

Everyone knows Dell thanks to its computer brand. Now NTT Data is looking to acquire part of Dell and sell its VR system to MLB. If it succeeds, the impact on its name recognition and brand image cannot be overestimated.

In acquiring the Dell division, NTT Data will load the bases. Selling the VR system could be the grand slam that carries the company past IBM and other rivals.