TOKYO -- The Shibuya district of Japan's capital is a tourist magnet, with its famous scramble crossing and countless options for shopping and entertainment. But Shibuya Station, the gateway to the area with eight railway and subway lines, is a head-spinning labyrinth of platforms and pathways that can cause even locals to get lost. With a little Bluetooth connectivity and augmented reality technology, though, the place becomes a lot less intimidating.

A new smartphone application is dedicated to helping users find their way around. The app, the name of which translates to "Shibuya Pedestrian Navi," is currently only available in Japanese. But it could be a sign of things to come as Tokyo tries to make itself more attractive and accessible to foreign visitors. 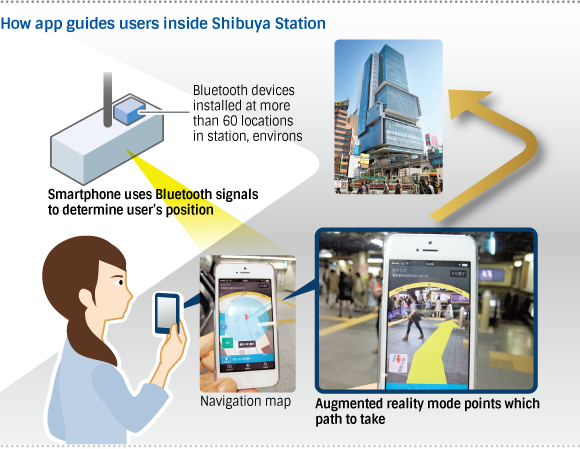 Let's put the app through its paces, starting on the fifth basement level at the ticket gate of the Tokyo Metro Fukutoshin Line. Our destination: Shibuya Hikarie, a towering shopping mall outside the station.

The display shows a map of the floors with an icon marking our current position. An arrow points in the direction of Hikarie. As we move, so does our icon. If there is a fork in the path, figuring out which way to go is simply a matter of lifting the smartphone and framing the view with the camera. An arrow appears on the screen showing the right direction. Soon, we are at the entrance to Hikarie -- no sweat.

Bluetooth amid the bustle

The app works like a GPS, but unlike the satellite system, it is usable underground. Typical indoor guidance services rely on Wi-Fi signals, which have a fairly long range of several tens of meters. But the Shibuya Station app uses Bluetooth, a standard for wireless exchanges of data over 1 to 10 meters. This requires the installation of more devices but allows for better accuracy.

Another thing that sets the new app apart is the use of augmented reality, or AR -- overlaying digital information on views of the real world. This is what tells users whether to go left or right when they hold up the camera. The feature is still a work in progress, but the potential for more informative guidance is clearly there.

The Shibuya Station software is based on a system developed by Boxyz, a startup in Tokyo. A public-private association has thrown its weight behind it. Members of the group include the nation's transport ministry, the University of Tokyo and telecom company KDDI, along with other wireless service providers. Four railway and subway companies that have lines running through Shibuya are on board, too: JR East, Keio, Tokyu and Tokyo Metro.

For a trial run, the association installed Bluetooth transmitters at more than 60 locations. Since the end of March, the participants have been monitoring various parameters -- such as signal strength and positioning accuracy -- to improve the service.

The association has its eye on the growing number of tourists coming to Japan. Last year, arrivals surpassed 10 million for the first time, and the government has set a target of 20 million by 2020.

"The number of international visitors will keep growing in the runup to the 2020 Tokyo Olympics," said a senior official at the association. "This is a first step toward making Japanese cities easier for travelers to navigate."

Building on the Shibuya Station experiment, the association plans to gradually add more stations and other buildings.

Another new Shibuya-centric app promises to make shopping in the area more convenient. Launched in March, the service allows users to ask participating stores to set aside specific products for pickup. The items can be paid for in advance by credit card.

When a customer goes to pick up a purchase, terminals in the store wirelessly detect the presence of the smartphone that made the reservation. The system alerts staff, who then quickly hand over the item. This allows stores to serve first-time customers as if they were regulars.

The app was developed by a Shibuya startup called tab. At the time of its release, more than a dozen stores had signed up.