A man looks at his mobile device as he walks during the Mobile World Congress in Barcelona on Feb. 24.   © Reuters
TAKASHI SUGIMOTO, Nikkei staff writerFebruary 25, 2016 19:00 JST | Japan
CopyCopied

BARCELONA, Spain -- Some promising new technologies for smartphone charging are among the important, if relatively low-profile, exhibits at a mobile device trade show now taking place in Barcelona.

These technologies, on display at this year's Mobile World Congress here, seem to represent key new trends in the ways mobile devices are charged.

Japan's Kyocera is showing off a rugged smartphone with a solar panel built into its display.

Kyocera's solar-powered smartphone prototype is a much-improved version of the one it showcased at last year's MWC.

"We have come much closer to launching products based on this technology," said Yoshihiro Tokushige of Kyocera's department responsible for telecommunications equipment management strategy, who was at the company's booth at the show.

An ultra-thin solar panel sits between the liquid crystal display and its touchscreen layer. 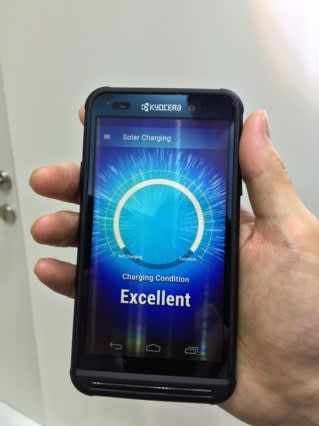 Kyocera's solar-powered smartphone, above. A thin solar panel sits below the display.

Smartphone users tend to watch the display much longer than those of conventional cell phones. Kyocera's solar-powered smartphone takes advantage of the long display-watching time to charge its battery.

The Kyoto-based electronics maker has greatly improved the efficiency of the solar panel, developed jointly with Sunpartner Technologies, a French company specializing in solar technology.

With the new, enhanced prototype, three minutes of being exposed to sunlight give the user one minute of talk time, whereas the previous model exhibited at the show last year required two hours of light rays for five minutes of voice.

Last year, few people paid serious attention to the product, according to Tokushige. But the improved performance has led to a wave of interest in the technology among visitors.

Unlike ordinary solar panels, the one used in Kyocera's solar-powered smartphone is almost transparent, allowing 85% of light to pass through it. This quality makes it suitable for use in smartphone displays.

In addition to the panel's own better performance, improvement in the electric circuit design has contributed to higher efficiency, according to the Kyocera representative.

The company is now seriously considering mass production and an early market rollout of smartphones using the solar technology.

Besides selling its own solar-powered smartphones, Kyocera may also sell such panels to other manufacturers.

Using only salt and water to top up batteries, the charger is more ecological than any other, claimed My Ernevi, marketing manager for myFC. Sweden's myFC has developed a portable battery charger based on fuel cell technology. It generates electricity when a cartridge containing salt water, rear, is inserted into a fuel-cell module.

The fuel-cell module generates electricity when a cartridge containing water and salt is inserted into it. The device starts charging a smartphone in about a minute when it is connected with a cable to the handset.

One cartridge can finish a full smartphone charge in about two hours.

The power output has been doubled during the past year, and the company has figured out a way to boost output by another 30%.

Unlike ordinary fuel cells using hydrogen, the product is safe and can be carried on international airline flights, according to myFC.

The product is already attracting attention in Sweden as a portable battery charger that doesn't require a battery, according to Ernevi. The company hopes to sell it globally.

Wireless charging is another important technological trend in the mobile telecommunications industry.

The wireless charging platform presented by Japanese wireless carrier KDDI and Ossia, a U.S. startup, at this year's Consumer Electronics Show, held in Las Vegas in January, created a lot of buzz at the show.

Smartphone makers are already gearing up for the spread of wireless charging, which uses an electromagnetic field to transfer energy.

Samsung Electronics' new flagship smartphone, Galaxy S7, unveiled at MWC, is capable of being charged wirelessly at a speed similar to the rate at which smartphones of other companies can be conventionally charged, according to a Samsung rep.