TOKYO -- Japanese stationery maker Pilot's Frixion Ball erasable ink pen has come a long way since it debuted about a decade ago, becoming a huge hit with people who, well, make mistakes. But what few realize is that the ink is actually not erasable. It just becomes invisible when heat is applied.

And therein lies the magic of this handy writing implement. Heat from the friction caused by rubbing the pen's hard eraser against the paper results in a chemical reaction, apparently "erasing" writing by rendering it invisible.

The roots of Frixion -- with the "x" in the name representing innovation -- go back about three decades. Then, a Pilot researcher wondered if it was possible to change the color of ink after its application to paper, similar to how leaves change colors in autumn.

From this, the company developed its first thermosensitive color-changing ink in 1975. It could not be made invisible, and its particles were too big for use in ballpoint pens, but it found a niche as a toy item and in packaging for beverages.

Pilot kept plugging away at development until it managed to shrink the ink particles small enough to fit inside a new type of ballpoint pen, which it introduced in 2002. As before, the ink could not be made invisible, but the pen enjoyed brief popularity among children, who could change the color of ink -- from black to red or blue -- by applying friction.

The idea never really took off until a French employee of Pilot's European unit suggested that a pen with ink that becomes invisible, instead of merely changing colors, would be a hit. In France, schoolchildren use fountain pens for writing, white-out pens for corrections and oil-based ink for writing over corrections. Pilot came up with the idea of developing a single pen that would do all three.

The challenge was to develop ink that could withstand high and low temperatures: If too sensitive to temperature changes, the ink might cause unintended consequences, such as inadvertently becoming invisible or visible. 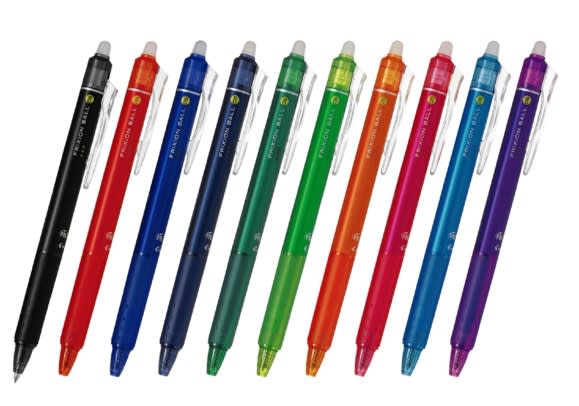 The Frixion lineup includes click-action models like these, felt-tipped pens and highlighters.

Pilot started development with its existing ink, which changed color with a 5 C range, eventually coming up with Frixion ink in 2005. The ink would completely disappear at 65 C, and only reappear if temperatures dropped below minus 20 C.

The Frixion Ball debuted in Europe in 2006 and in Japan the following year. Afterward, Pilot continued to refine the ink, such as making it darker and adding writing capacity.

"The product has been widely received because we are selling convenience," said an official of Pilot's sales unit. "We are willing to develop more products that people want to become invisible," the official said.

One customer even challenged the company to make ink that is erasable but can be made indelible later.