TOKYO -- Faced with the popularity of the Line chat app in home-bound Japan, Katsuhiko Kawazoe, head of research and development planning at Nippon Telegraph & Telephone, has been asking himself: "Why could we not develop a service like this?"

NTT, once the most valuable company in the world just after its 1987 listing, no longer ranks among even the top 50. Group wireless carrier NTT Docomo, responsible for the first-ever mobile internet service, is stuck in a rut, and investors see little in the way of innovative new businesses on the horizon.

NTT President Jun Sawada hit on working from home during the coronavirus pandemic as a catalyst for change.

Because of the virus, "we're working quickly to introduce remote technology in settings where working from home is difficult," said Eiichi Sakamoto, NTT's head of general affairs. NTT was once the most valuable company in the world. But its fortunes turned as it proved slow to innovate.   © Reuters

Perhaps the most symbolically significant is NeWork, an online workspace that lets co-workers chat with the click of a button and can also keep records and translate. The service could be considered NTT's version of Zoom, the videoconferencing software from Zoom Video Communications that has become ubiquitous amid the pandemic.

Sawada and Kawazoe began discussing NeWork in February and pushed group company NTT Communications to bring it to market quickly. With the help of Takuya Oikawa, an outside software developer and Google alum, the company put NeWork on track toward commercialization in just two months. The result of its efforts is a service that, while nowhere close to Line in terms of users, could compete with Zoom.

NeWork maintains its data on domestic servers because, Sawada said, "there will be growing demand from corporations that are strict on security" given the conflict over technology between the U.S. and China.

Meanwhile, NTT Com CHEO, a subsidiary of NTT Communications, has been drawing interest from businesses -- both inside and outside the group -- interested in setting up home-based call centers.

The company, which operates call centers in such cities as Sendai, has more than 1,000 employees who telecommute. It is well known in its industry, counting Microsoft among its customers and winning an award last year in a global competition.

After Japan's long Golden Week holiday ended in May, NTT Com CHEO cut the share of workers physically present at its Sendai center to just 30%. The company has won praise from staff as a flexible place to work, and applicants for new positions have doubled or tripled compared with before the pandemic, relieving a labor shortage.

During a telephone conversation in early June, Sawada told the company's union boss that for the larger business community to commit to digital transformation, NTT itself must take the lead.

"There is no growth if you don't strike a balance between telework and economic activity," Sawada said.

NTT kept half its staff working from home even after Japan lifted its emergency declaration. When Japanese officials urged companies to lower the office attendance rate on July 27, in response to a surge in COVID-19 cases, NTT that morning ordered all of the roughly 280 group companies to send more people to work from home. 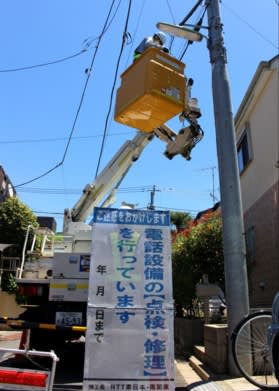 Earnings on the line: infrastructure maintenance is one job NTT cannot do remotely. (Photo by Masaaki Kudo)

The NTT group, once a state-owned monopoly, employs 180,000 people. The company's profile is not the type that would be open to radical changes it is currently pursuing. The current trajectory has encouraged employees to suggest services that were once unthinkable.

That said, the transformation is only beginning. Back in February, when NTT first recommended telecommuting, there were wild disparities in adoption among group companies. While NTT Communications attained 90% remote work, the penetration was no more than 10% at NTT East and NTT West.

At NTT East, the amount of infrastructure work made the telecommuting policy essentially a dead letter, according to a company insider. Upgrades in web meeting security checks and virtual private networks finally drove up the rate to 50%.

But for workers who perform on-site duties, doing their job from home is not feasible. One NTT East engineer reported every day to the office during the emergency declaration, and performed maintenance work on communication lines at five or six residences a day.

"Work from home is surging, so the responsibility is heavy," said the engineer.

A remote maintenance system will be essential to minimize the risk of infection. Customers could send images of problems via smartphones to engineers, who can determine a solution.

Despite all NTT's progress, "there's a risk that we'll backslide if we let our guard down," an executive said.

While the group's profits have proved more resilient in the face of the pandemic than those of other companies such as automakers, the hurdles to real change remain high. Sawada, who people at NTT say is not afraid to break taboos, is under the microscope as investors await his next move.