US tech company seeks new funding from the likes of SoftBank

TOKYO -- Palantir Technologies, a U.S. big-data management company valued at more than $12 billion, is open for business in Japan as early as this year as it reportedly seeks fresh financing from investors, including Japan's SoftBank Group.

Co-founded by billionaire investor Peter Thiel in 2004, the company recently opened an office in Tokyo and began hiring local engineers. Palantir will test its Foundry enterprise software with Japanese companies for several months before offering it commercially. The company's target clients include big automakers and banks.

Gaining a foothold in Japan will be a test of Palantir's ability to grow beyond Western markets as the company seeks further funding while remaining privately held. Reuters recently reported that it is looking to raise $1 billion to $3 billion based on a total valuation of at least $26 billion, more than twice its current valuation of around $12 billion according to CB Insights.

Palantir has held talks with a number of investors about participating in the latest fundraising round, including SoftBank, according to Reuters. Fabrice Bregier, Palantir's global head of international expansion did not comment on its fundraising plans but said about half of its revenue is already derived from corporate clients, and that the proportion will rise to two-thirds in a few years. Growth is faster in markets outside of the U.S., he added. Palantir does not disclose financial data, but its total revenue is estimated to be near $1 billion annually.

Palantir operates in more than 15 countries, including Singapore and Australia. But its ability to cater to the Asian market may face its biggest test in Japan, which is home to some of the region's top players in legacy industries that are not data savvy.

The company was formed in 2004 by a group that includes PayPal co-founder Peter Thiel. Palantir, once known as a secretive business that helped the CIA and other U.S. agencies track terrorists, has made a push into the corporate sector in recent years, enlisting Airbus, Merck and Credit Suisse as clients.

"Japanese companies are extremely good at their core technologies, but in digital transformation they have not made the breakthrough I can see in other parts of the world," Bregier said during an interview in Tokyo.

Most data analytics software focuses on specific functions, such as fighting cyberattacks. Palantir offers a broader tool that crunches thousands of terabytes of data per day -- financial documents, phone records and computer logs, for example -- and reorganizes them into simple models so they can be monitored and analyzed easily. 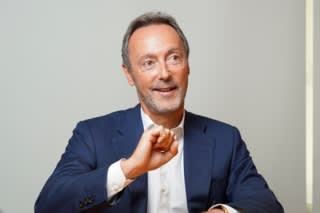 Fabrice Bregier, president of Palantir France and global head of international expansion, speaks with the Nikkei Asian Review in Tokyo on Sept. 6.

That simplicity helps bring data use beyond the IT department and deliver more cost savings, Bregier said.

European aircraft maker Airbus, where Bregier previously served as chief operating officer and president of its commercial aircraft division, began using Foundry in late 2015 to accelerate production of the newly designed A350 passenger jet. The software was later integrated into the entire company and is used by around 1,000 engineers, factory workers and other employees.

Airbus later launched software based on Foundry that shares data with airlines and suppliers. More than 90 companies use it to monitor data on 8,000 aircraft.

Palantir software also has been deployed to speed recalls for automakers. Applications being developed in Japan are designed to help cryptocurrency exchanges detect money laundering.

Big-data management has gained attention in recent years among companies looking to improve their security, information technology and marketing. More than half the information stored in an organization is "dark data" that is not used or analyzed, according to some estimates.

Palantir is not the only big-data company seeking to expand in Asia. U.S.-based Splunk, which also sells software that helps analyze raw data, formed a Japanese subsidiary in 2012 and moved to a larger office in late 2017. The Japanese unit's revenue has grown at double-digit rates annually, a company official said.

Bregier said the company operates only in "liberal democracies" such as Japan.

"We deployed our solutions beyond the United States to countries which share the same values and same vision," he said.