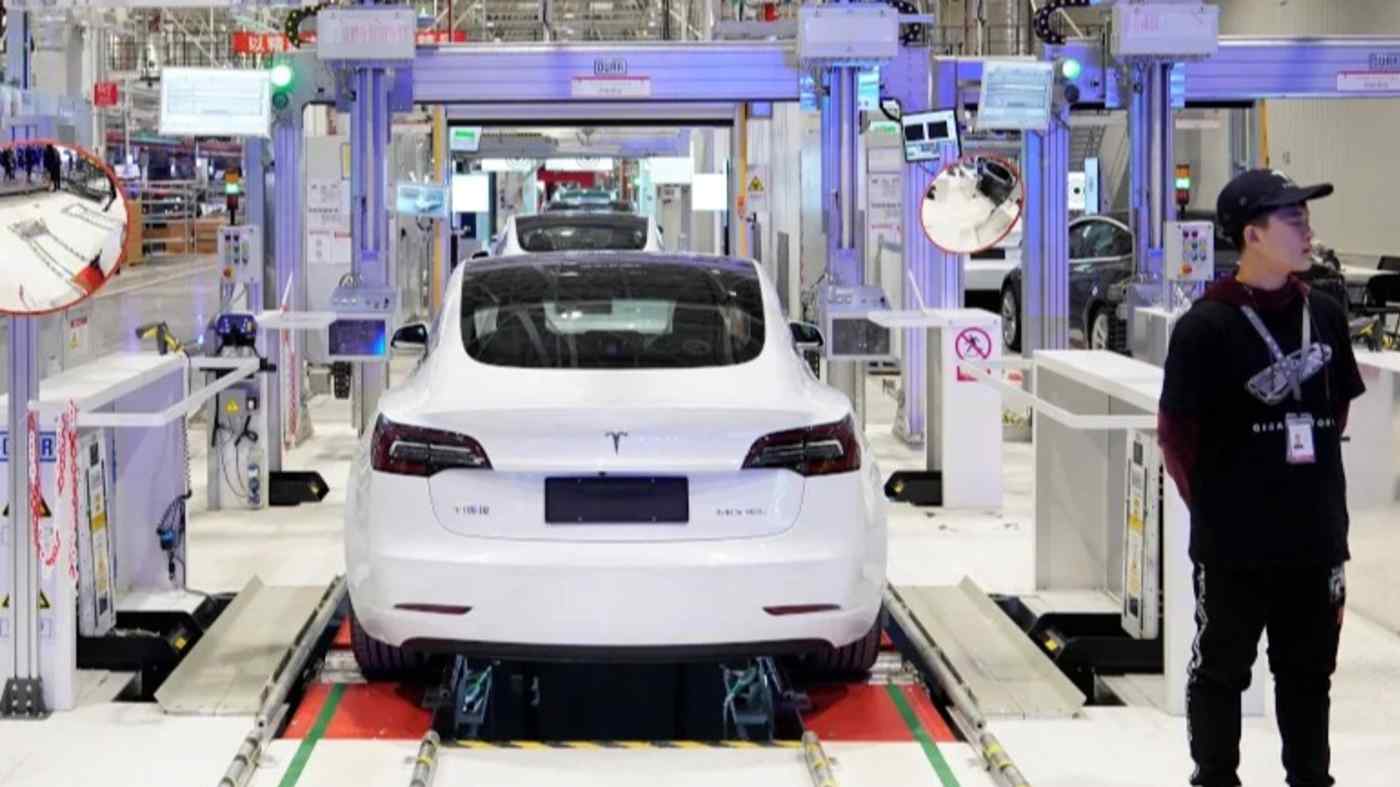 A Tesla China-made Model 3 vehicle at factory in Shanghai. Panasonic will no longer be the sole supplier of batteries for the electric vehicle in China.   © Reuters
ITSURO FUJINO, KANA WATANABE and TAKESHI SHIRAISHI, Nikkei staff writersFebruary 4, 2020 13:33 JSTUpdated on February 4, 2020 14:53 JST | China
CopyCopied

OSAKA/PALO ALTO -- A bright spot in Panasonic's otherwise disappointing earnings report this week was the improvement in its electric vehicle battery sales to Tesla.

"During the third quarter [the EV battery business] has started to climb out of the red," Hirokazu Umeda, Panasonic's chief financial officer, told reporters.

But even this good news came with a caveat. On the same day, rival battery maker CATL confirmed that it had signed a two-year deal to supply batteries to Tesla's new Gigafactory in Shanghai. This officially marked the end of Panasonic’s role as exclusive supplier of electric-vehicle batteries to Tesla, which had previously revealed that it had entered into "small-scale" partnerships with CATL and South Korea's LG Chem.

Panasonic backed away from the chance to invest in the China factory last spring amid concerns that it had tied its fortunes too closely to Tesla. But in recent months, Tesla’s stock price and earnings have staged a recovery. Last week the company reported it had posted net income for two consecutive quarters. The Model 3, which famously went through a "production hell" to ramp up output, has delivered on sales. Tesla's vehicle sales jumped 50% to about 370,000 units in 2019.

Panasonic on Monday reported an 18% drop in consolidated operating profit for the three quarters through December. The decline was mainly attributed to a lack of investment in factory automation in China.

But sales in Panasonic's onboard battery segment climbed 13% --  a sign that Tesla is a rare bright spot at the company, which is in the midst of a sweeping restructuring. Panasonic shares rose more than 10% on Tuesday on the improving outlook for the battery business. Tesla shares surged 20% after the Panasonic report.

Panasonic hopes to recoup its investments, worth at least 200 billion yen ($1.84 billion), in the Gigafactory it jointly operates with Tesla in the U.S. state of Nevada. It currently supplies Tesla's Shanghai Gigafactory with batteries made in the U.S.

In November, Panasonic President Kazuhiro Tsuga said the company has no plans to produce electric-vehicle batteries in China.

"It's up to Tesla to decide whether it will use batteries we produce at the [Nevada] Gigafactory or those made by Chinese companies," said Tsuga.

CATL, short for Contemporary Amperex Technology Co. Ltd.,  is the world's biggest supplier of electric-vehicle batteries. The company said on Monday that it had signed a deal to provision batteries to Tesla in China from July 2020 through June 2022. No terms were disclosed.

The impact on Panasonic will be twofold. First, the company risks a slowdown in its Chinese battery business, despite the rise in electric-vehicle sales projected for the long term in the same market.

All the while, CATL and other players have slowly cultivated relationships with Tesla. Now the concern is that Panasonic will lose orders.

This turn of events also complicates Panasonic's plan to boost profits in the battery business. The company had intended to negotiate with Tesla for higher prices.

But with multiple procurement sources in China under its belt, Tesla is better positioned to press for discounts from Panasonic.

Tsuga has pledged that Panasonic’s money-losing business segments will be "eradicated" by March 2022. Although the car battery business makes up a small fraction of Panasonic's 8 trillion yen in consolidated sales, it is positioned as a key growth business.

To accelerate growth in batteries, Panasonic said Monday it had finalized a joint venture agreement with Toyota Motor. The automaker will take a 51% stake in the new battery company, to be named Prime Planet Energy & Solutions.