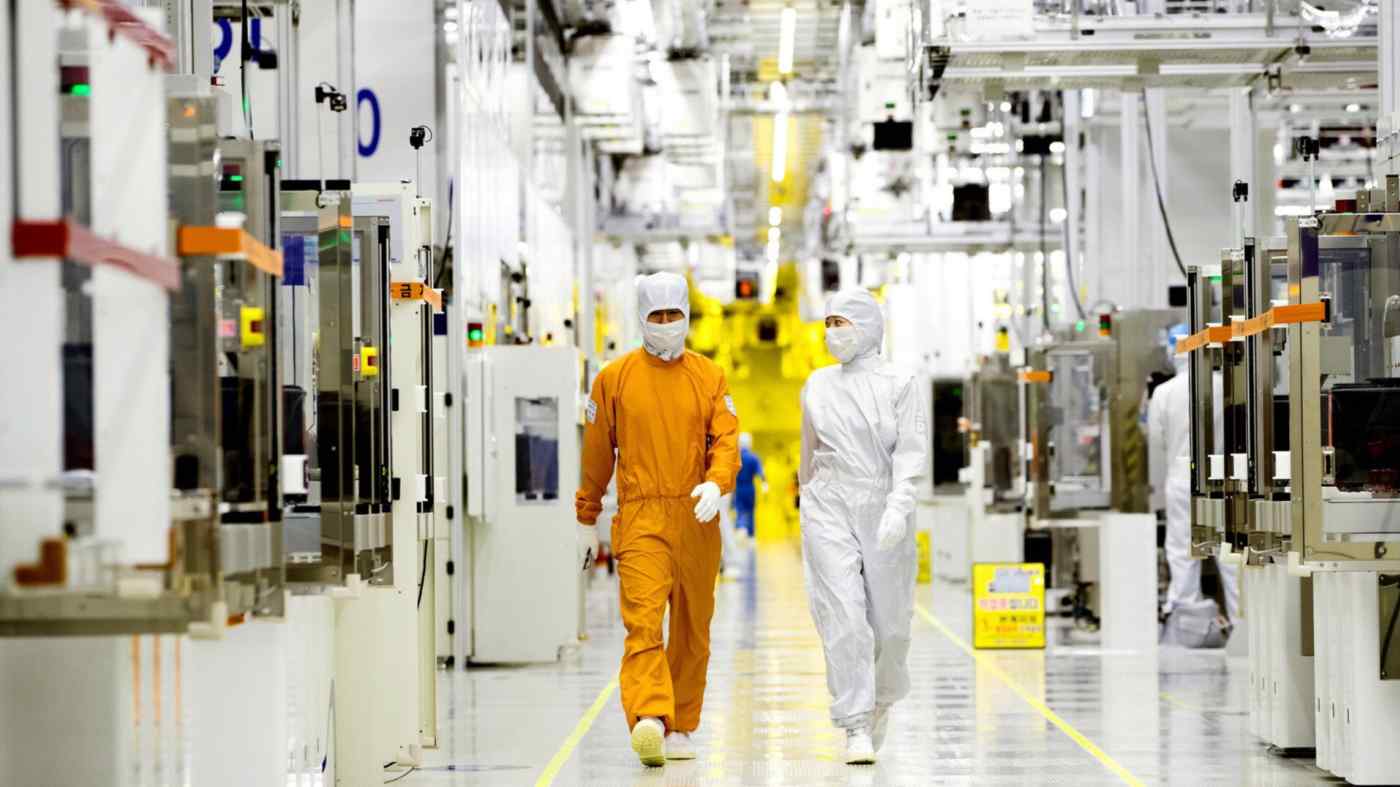 SEOUL -- South Korean memory chip producers Samsung Electronics and SK Hynix are benefiting from a surge in demand for memory chips used in data centers, in which investment is increasing in response to the coronavirus pandemic.

And new sophisticated game machines scheduled to come out this year are expected to extend the boom even further.

Samsung on Thursday reported an operating profit of 5.43 trillion won ($4.55 billion) in its semiconductor segment for the second quarter, a roughly 60% jump on the year.

Improving demand kept prices firm, boosting profit at the world's top company for both DRAM chips and NAND flash memory. Operating margin in the segment rose to 29.8%, up 7 percentage points from the January-March quarter.

South Korean compatriot SK Hynix, the world's second-largest maker of memory chips, reported the week before that operating profit more than tripled to 1.95 trillion won for the second quarter.

Operating margin reached 22.6%, up 12 points from the January-March term. DRAM, which produces about 80% of total sales, remains strong, with the average unit price rising 15% on the quarter.

"Solid growth will continue in the medium to long term," Chief Financial Officer Cha Jin-seok said. NAND shipments are projected to surge more than 40% in 2020, with growth in a high-10% range expected for DRAM, or dynamic random access memory.

Their optimism for a sustained rally is fed by the upcoming releases of next-generation video game consoles. Both Sony and Microsoft are set to debut the first updates in seven years -- PlayStation 5 and Xbox Series X, respectively -- for the holiday season.

Both machines will feature a solid-state drive for the first time, providing faster data read speeds than hard-disk drives in their preceding models. PS5's standard specs carry 825 gigabytes of storage, while Xbox Series X will boast 1 terabyte -- or four times the storage capacity of high-performance smartphones.

PlayStation consoles already have DRAM, but the new version will boast twice the capacity of the existing model.

"PS5 will reach annual sales of 20 million units, so it will have a big impact on the memory chip market," said Do Hyun-woo, an analyst at NH Investment & Securities.

"NAND for new game consoles will make up around 5% of demand in the second half of 2020," said SK Hynix's Cha.

Interactive online games are a boon as well. High-resolution games place a heavy burden on data centers, spurring demand for more servers. Many players seek memory upgrades for their computers to enhance their gaming experience.

Some analysts see a smartphone recovery, after consumers refrained from going out to shop for new handsets between April and June. Second-half sales of smartphones will grow 27% from the first half, Daishin Securities projects. This also would bolster demand for memory chips.

Samsung, SK Hynix and U.S. rival Micron Technology command about 80% of the global market, creating a climate that is unlikely to produce over-investment that causes product prices to collapse.

But Chinese state-backed chipmakers have the potential to disrupt the oligopoly. Their presence remains small, as they still are developing technical know-how and unable to access manufacturing equipment due to U.S. restrictions. But with broad support of Beijing, they could well emerge as strong competitors, market observers said.