SINGAPORE -- Sea, an online gaming and e-commerce group, on Tuesday reported a net loss of $425 million for the July-September quarter, wider than the $206 million loss a year earlier as it heavily invested in Southeast Asia market expansion.

Revenue for the quarter was $1.21 billion, up 99% from a year earlier, driven by Shopee, its e-commerce service.

The Singapore-headquartered company is one of the biggest beneficiaries of the COVID-19 pandemic, with its market capitalization more than quadrupling from the beginning of this year, topping $80 billion. It is now Southeast Asia's largest listed company by market value.

The gross merchandising value for the e-commerce unit was $9.3 billion, more than double that of the year-earlier quarter. Its online gaming unit attracted 572 million quarterly active users from around the world, up 78% from a year earlier.

Referring to its online gaming business, Sea's Chairman and Group CEO Forrest Li said during a teleconference Tuesday that "we expect our very strong performance in the third quarter will sustain through the fourth quarter." 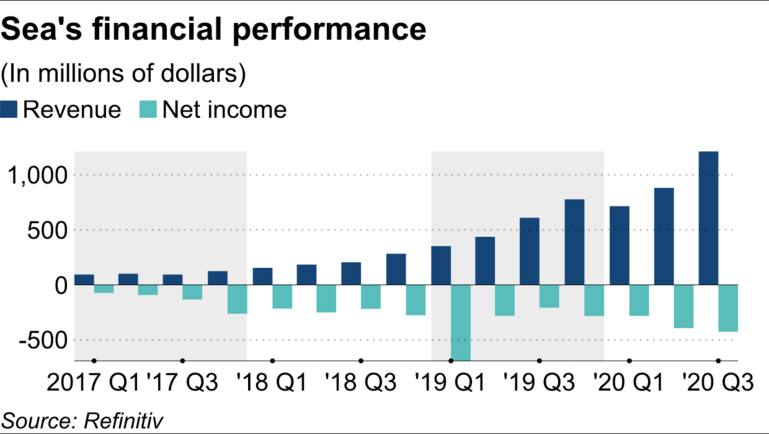 The digital payment business, SeaMoney, generated revenue of $14.4 million for the quarter, only 1% of the total revenue, suggesting monetization of the business will be a challenge for the company.

Li said: "We see a significant opportunity ahead of SeaMoney and believe that we can capture it in a highly efficient manner by building on our core use cases."

The coronavirus pandemic has accelerated digitization in Southeast Asia. According to a digital economy report released last week by Google, Temasek Holdings and Bain & Company, Southeast Asia's e-commerce market is expected to grow 63% this year to $62 billion, from last year's $38 billion, in terms of gross merchandise value.

Li told Nikkei Asia in a September interview that his company would continue to aggressively capture untapped opportunities in the region and beyond, saying, "We don't want to compromise our growth potential."

Sea is listed on the New York Stock Exchange and counts Tencent Holdings as a major shareholder.