Smart contacts bring future into focus, along with maps and data TOKYO -- Imagine stargazing and a map of the constellations suddenly appears in the night's sky. Or walking through a foreign city and arrows appear out of thin air, guiding you to the most popular restaurant in town.

These science fiction-like scenarios are no longer far-fetched. A number of developers are working on smart contact lenses that can make such experience a reality, with the aim of commercializing them in a few years.

U.S. startup Mojo Vision has emerged as a leader in the field. The company is developing contacts that will show images on microdisplays using augmented reality (AR). A built-in antenna allows the device to communicate with an external unit and connect to the internet.

"You can see turn-by-turn directions while walking, important steps for replacing an unfamiliar machine part, or talking points for a presentation -- all without holding a device or looking down at a screen," the company says on its website.

Commercialization of the contact lenses will take three years, Mojo Vision co-founder and CEO Drew Perkins said, noting that the eyewear is undergoing improvements to be certified as a medical device.

To help with the certification, the startup has partnered with Japan's Menicon, which has expertise in material development, lens cleaning and device approval. Ensuring product safety will be key to commercialization.

With the help of 5G communications and augmented technology, smart contact lenses can lead to a host of applications. For example, they can work as a car navigation system that displays directions and maps on roads and buildings. They can also guide workers in manufacturing or distribution processes. Until now, the use of smart contact lenses has been limited to measuring ocular pressure with sensors to detect glaucoma. Mojo Vision's offering takes it to the next level by displaying images.

For the past several years, tech groups like Google and Sony have put out smart glasses. Facebook and French eyeglass maker Essilor Luxottica have codeveloped AR-powered smart glasses that are due to be released this year.

But unlike smart glasses, Mojo Vision says its smart contact lenses can allow users to view data that are integrated into a wider field of vision.

The contact lenses adjust the way light enters the eyes, and they are connected to glasses the user wears on top of them. The glasses contain miniscreens, and data is displayed in a way that blends unobtrusively into normal vision.

The smart glasses system offers 100-degree field of vision, wider than the predecessors. Innovega plans to outsource mass production and license its technology. 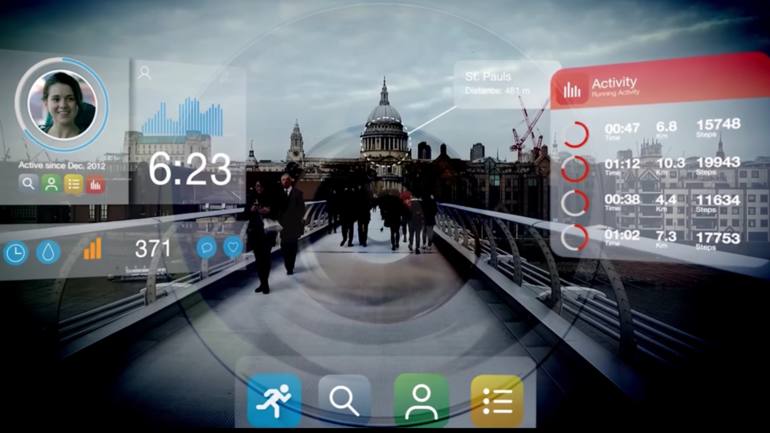 Jerome Legerton, a co-founder of Innovega, is a former ophthalmologist. He oversees the work in attaining approval from the U.S. Food and Drug Administration. Innovega's tech has drawn attention from the video gaming industry for its AR capabilities.

QD Laser has developed glasses that use so-called quantum dot lasers to project images directly on the retina.

Images captured by a built-in camera are transmitted via these lasers, which are then steered by mirrors into the eye. This design uses just one-tenth as much electricity as products that use conventional displays in the lenses, according to the company, which is listed on Tokyo's startup-focused Mothers market.

Intermestic, the Tokyo-based maker of the Zoff brand of glasses, has partnered with QD Laser to develop smart glasses using this technology.

Intermestic envisions a wide range of applications for smart glasses such as entertainment. The company will further refine the design, making it lighter and wireless, with an eye toward full commercialization as early as 2024.

"We've entered an era of new technology development where even glasses makers are shifting from optical to digital," an Intermestic official said.