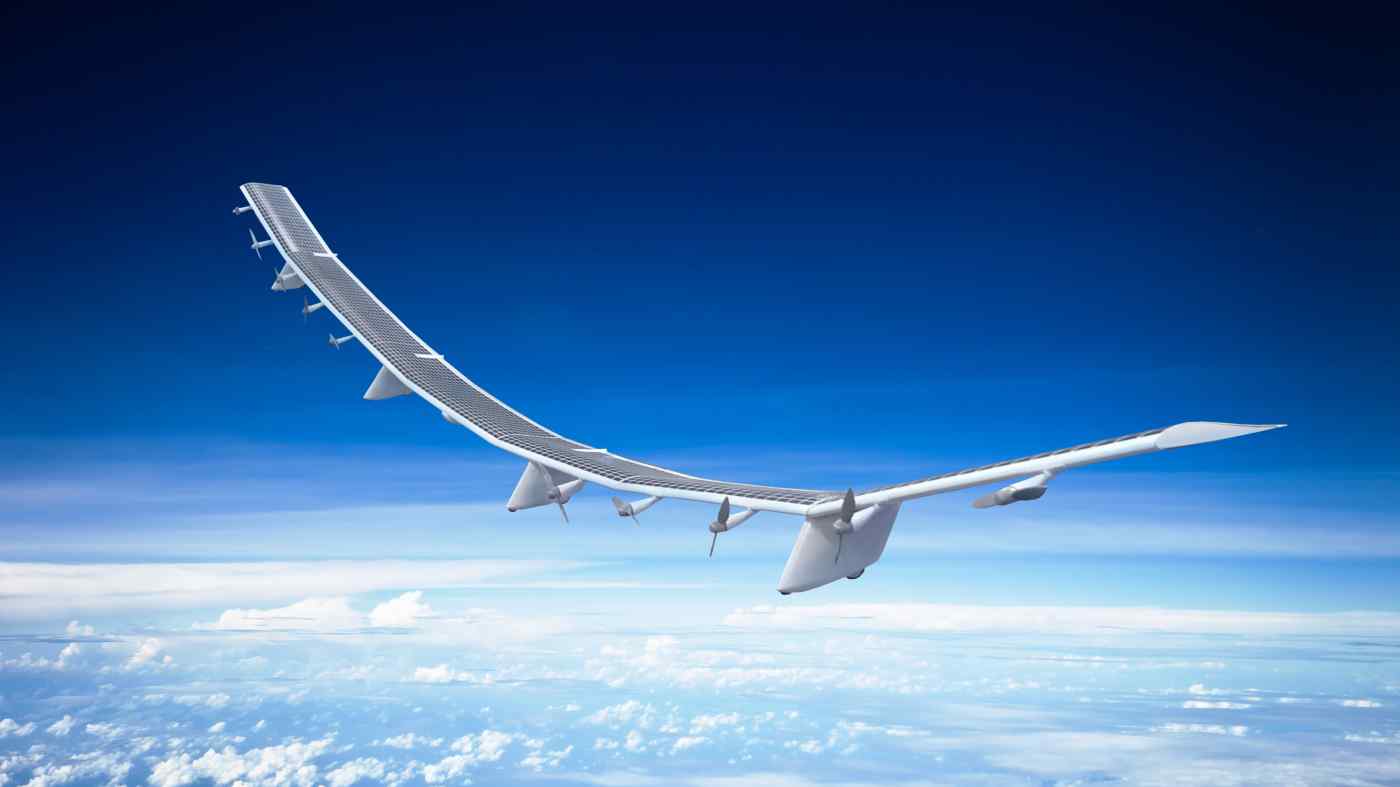 TOKYO -- Japanese telecommunications conglomerate SoftBank is working toward the commercialization of "airborne base stations" with the possibility of conducting test flights in Japan as early as in 2021. Unmanned aircraft serving as base stations will fly in the stratosphere at altitudes of 20 km to provide global mobile communication services.

SoftBank subsidiary HAPSMobile has been working to achieve commercialization by fiscal 2023 and is promoting of the technology.

"I realized that jet streams are so violent. I couldn't sleep at all, fearing that the aircraft might crash," recalled HAPSMobile President and CEO Junichi Miyakawa, who is also SoftBank's representative director. He stayed up all night on Sep. 22 last year to watch real-time images sent from a camera on board the company's unmanned aircraft Sunglider during its test flight at an airfield in the U.S. state of New Mexico.

One of the world's largest unmanned aircraft reached the stratosphere -- the second layer of Earth's atmosphere -- where the maximum wind velocity is about 30 meters per second and temperatures fall as low as minus 73 degrees Celsius. Sunglider flew some 20 hours powered only by batteries charged before flight and sunlight, staying in the stratosphere for five and a half-hours. HAPSMobile succeeded in flying the aircraft in the stratosphere on the fifth attempt, only taking about three years to achieve the feat.

HAPS stands for high-altitude platform station. It refers to a high-altitude quasi-satellite in the form of an unmanned aircraft that a carries a mobile phone base station some 20 km above ground. The 78-meter-long Sunglider has 10 propellers and flies in the stratosphere at 110 kph. It generates power with sunlight and is stationary at one location for about half a year to send signals. It can cover an area of 200 km in diameter.

But many challenges, particularly legal ones, need to be addressed before commercialization. No country, for example, has legislation covering flying objects in the stratosphere. New aviation regulations will be needed as unmanned aircraft will pass through altitudes where commercial aircraft are flying before reaching the stratosphere. Another issue is governing communication signals that transcend national borders.

HAPSMobile and Loon, a subsidiary of Google parent Alphabet, jointly announced the establishment of the HAPS Alliance in February last year. Among the about 30 companies that have joined the framework include Nokia of Finland, Ericsson of Sweden, a subsidiary of France's Airbus, Deutsche Telekom of Germany and Spain's Telefonica. In addition to creating legal frameworks, acquiring a type certificate required for commercial flights of unmanned aircraft is expected to take time. 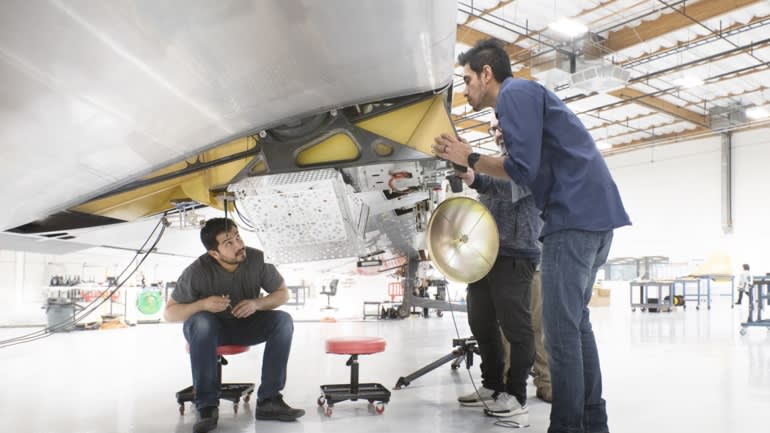 Workers attach a radio antenna to a Sunglider. (Photo courtesy of the company)

Rwanda and Australia have shown interest in HAPS and expressed their intention to support it. HAPSMobile and Rwanda have launched joint research to conduct test flights in the African country with the aim of providing HAPS-based mobile services.

In Australia, existing services cover 90% of the country in terms of population but only 10% in terms of land. The government, therefore, considers HAPSMobile's services essential for improving its communications infrastructure.

HAPSMobile is taking on the challenge of establishing an earnings model in emerging economies where no Internet connection is available. To achieve that means developing low-cost unmanned aircraft is necessary. "We must provide our services for $1 per month for the end user. It cannot be achievable as long as unmanned aircraft is costly," says Miyakawa. At present, it costs about 700 million yen ($6.8 million) to develop one aircraft, but HAPSMobile is aiming to lower the cost to around 100 million yen.

Solar panels are the most expensive part of the aircraft. The company has been researching whether high-powered, expensive panels can be substituted with affordable silicon-made panels used for solar power generation on the ground.

HAPSMobile announced joint research with Sanyo Chemical Industries last month to develop next-generation all polymer batteries, or APB, to be mounted on unmanned aircraft. APB are safer and have almost double the energy density of conventional lithium-ion batteries. Unmanned aircraft need to be powered by batteries during the night, thus making batteries lighter is another major challenge.

HAPSMobile hopes to start mass production of aircraft in 2027 and intends to send dozens of airborne stations into the stratosphere per month to promote the services.

Competition over communication services in space and elsewhere is intensifying around the world. Amazon.com announced in July last year that it received approval from the U.S. Fair Trade Commission for a plan for satellite-based communication services. The retail giant will invest $10 billion to launch more than 3,000 satellites to help address the digital divide between urban and rural areas. 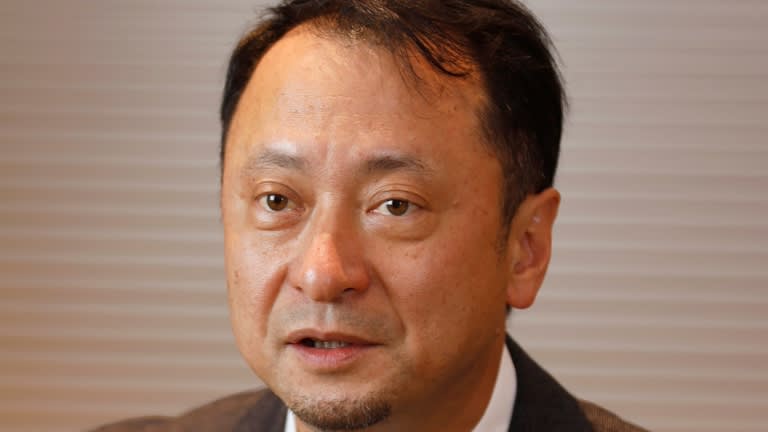 Junichi Miyakawa, president and CEO of SoftBank subsidiary HAPSMobile, says the company hopes to start mass production in 2017 of unmanned aircraft that can fly in the stratosphere. (Photo by Akihiro Ota)

According to Miyakawa, HAPS has an advantage over communication satellites because it's compatible with smartphones and other existing devices, while satellites require special ones. Also, HAPS operates much closer to the Earth than satellites, which are at least several thousand kilometers above ground. That difference means less frequent communication delays and easier application to 5G services and IoT solutions.

HAPSMobile is considering using its services in Japan as a backup in case base stations on the ground become unusable in natural disasters. With one aircraft covering an area 200 km in diameter, several dozen aircraft are expected to be able to cover the entire country.

Sources say the company has been conducting test flights in the U.S., but is considering carrying out further tests in Japan -- either in Okinawa or Hokkaido -- in 2021 at the earliest. At any rate, this year is likely to see rapid progress in the development of airborne base stations.