ANA explores a new way to connect people without flying 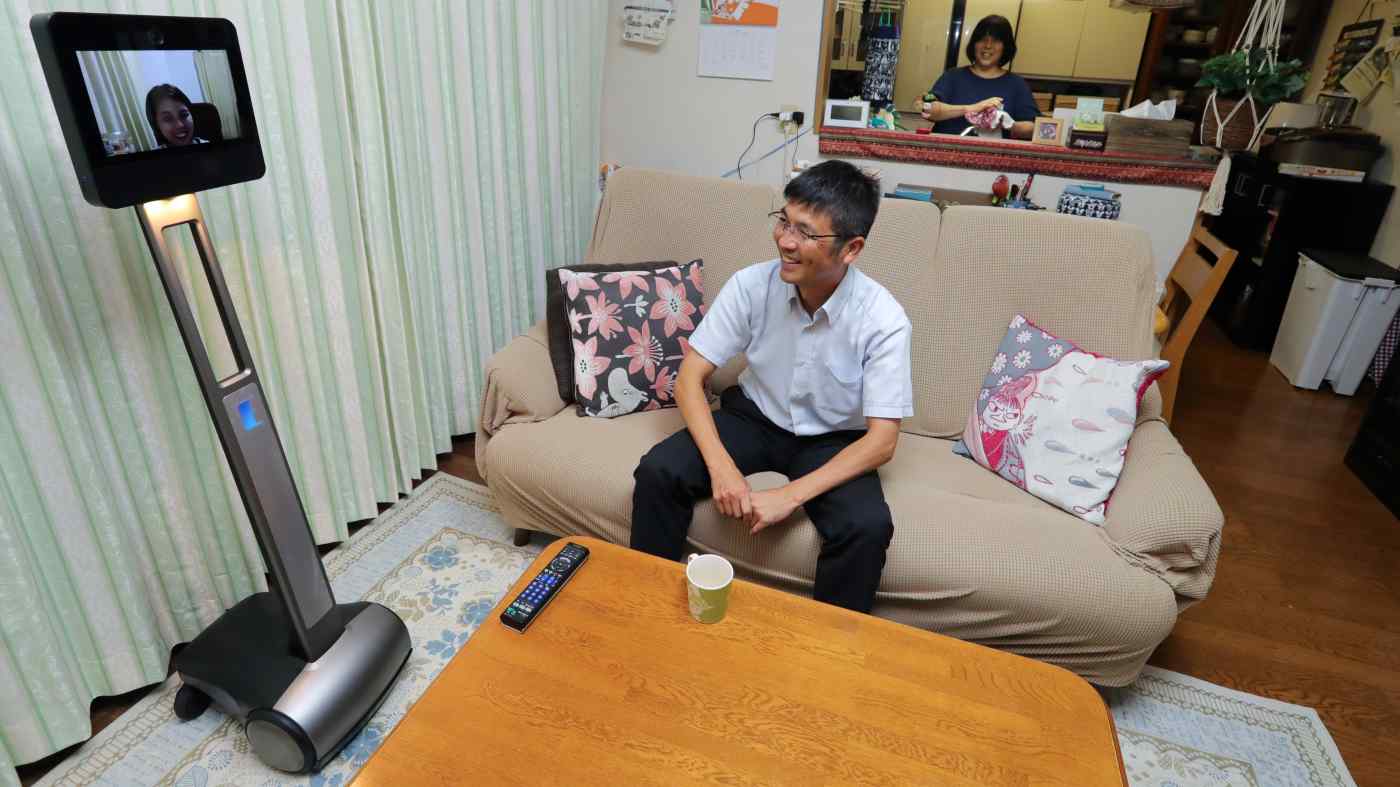 TOKYO/OITA, Japan -- How might you feel if you wanted to go to Hawaii, could book a trip at home via a website and then instantly find yourself transported to a palm-fringed beach with blue sky and gentle breezes?

The technology is not quite there, yet. But the day of such "Star Trek"-style teleportation is drawing ever closer thanks to a project developed by ANA Holdings, Japan's biggest aviation group, that has the immodest aim of "transcending the limitations of the human body."

Its ultimate aim is to connect people from every part of the world so that they can visit, shop, watch wildlife, care for aging parents or just socialize with friends anywhere else -- even if they lack access to an air service.

"Welcome home," Kenji Uchida said to his daughter Sae one recent evening. Uchida lives with his wife and son in the southern prefecture of Oita, a thousand kilometers away from Sae's home in Tokyo.

Thanks to the Avatar Robot installed in the family home, Sae teleports herself into her 53-year-old father's living room almost every day.

The robot, which stands about 1.5 meters high, comes with a screen, a camera and a set of wheels.

When Sae "avatars-in" through her PC, she immediately takes control of the robot, moving herself around the house, chatting with her parents over dinner or following them to the kitchen when it's time to wash up. She usually stays around three hours.

"Not only can I communicate with my daughter," Uchida told an initially skeptical reporter from Nikkei Asian Review who witnessed the interaction. "I feel like she is back at home."

With four of his five children living away from home, Uchida says the robot recreates the crowded atmosphere of a decade ago when the whole family would swap stories around the dinner table.

Unlike a video call on a smartphone, the visitor has the power to control the robot's moves, making it easier to conduct a normal conversation and freeing people to do other things while they talk.

"Avatar gives me an independent 'myself,'" said Sae. She looks forward to the next generation of robots, which might allow her to adjust the height of the screen, open doors or even transmit a sense of touch.

Nearly a month after ANA launched its demonstration in partnership with Oita Prefecture as a part of its Avatar Vision project, the company wants to market robot experiences to the general public alongside flights and other services on its website.

All of this may happen sooner than we imagine.

Citing ANA as an example, the World Economic Forum predicted in June that collaborative telepresence would underpin a multibillion-dollar industry by 2025.

"All the pieces are in place for it to become transformative within three to five years," the WEF report said. According to BIS Research, the global telepresence market generated $67.4 million in 2018 and will reach $218.6 million by 2023.

Set to further demonstrate its robots in a range of public places over the next few months, ANA will officially launch its first paid telepresence service sometime next year.

"We believe this project could help solve Japan's declining-population problem, and the perception that everything happens in Tokyo," said Akira Fukabori, director of ANA's Avatar division. Having partnerships with more than 100 corporates, ANA plans to deploy up to 2,000 robots by the end of 2020.

One such partner is Tokyu Department Store. In a pilot project last year, shoppers in Hokkaido in northern Japan were able to log into a robot placed at Tokyu's flagship store in Tokyo's Shibuya ward and wander the aisles in one of Japan's most fashionable districts. Another trial at an aquarium in Okinawa allowed children in faraway places to experience its ocean wonders as if they were there in person. ANA opened a pop-up cafe where the tea and coffee were served by robots, controlled by people suffering from complete paralysis. (Photo courtesy of ANA Holdings)

In a joint partnership with robot startup Ory Lab and the Nippon Foundation, ANA opened a pop-up cafe in Tokyo last November where the tea and coffee were served by robots controlled by people suffering from complete paralysis using eye-tracking technology.

Other partners such as Riken, Japan's largest research institute, are counting on ANA's avatar project to help bring their technology to the wider public.

Using a new image-recognition system that would process data more efficiently and allow robots to be deployed in remote locations, Mitsuru Kishimoto, manager of Riken's innovation design office, said the process would "integrate our technology to be delivered to society, a function we don't possess."

While more will be revealed at the Combined Exhibition of Advanced Technologies trade show in Tokyo later this month, ANA has already signaled its intention to expand into health care and education.

"Avatars are the ultimate forms of transportation, transcending the limitations of the human body," said Kevin Kajitani, another director from ANA's Avatar division.

ANA's foray into teleportation began three years ago when the airline entered a team in the inaugural Visioneers competition organized by the XPRIZE Foundation.

"At first the judges thought teleportation could be a tool to drive us to a less human society, or perhaps to be used for weapons," Kajitani recalled. "And we were dead last at the end of the first day."

When the ANA team convinced the judges that teleportation should be about accessing human experiences through the eyes of a robot, they took home first prize. Following a $22 million partnership with the foundation, the company last year set up the ANA AVATAR XPRIZE to encourage further innovation in the field.

But why would one of the world's biggest airlines -- earning $19.3 billion in revenue last year -- invest in technology that gives people a reason not to jump on a plane?

Kajitani says that by changing the meaning of transportation itself, the airline hopes to boost demand for travel. "The airline industry is only transporting 6% of the world's population," said Kajitani. "We want to crack to open the huge 94% market."

By prompting spontaneous interaction through teleportation devices, Kajitani believes the robot eventually will increase demand for travel, adding that it took more than 12 months to bring ANA's management team on board.

"We cannot replicate the real world," Kajitani said. "But after you travel with Avatar dozens of times, eventually you will want to meet that person in real life." 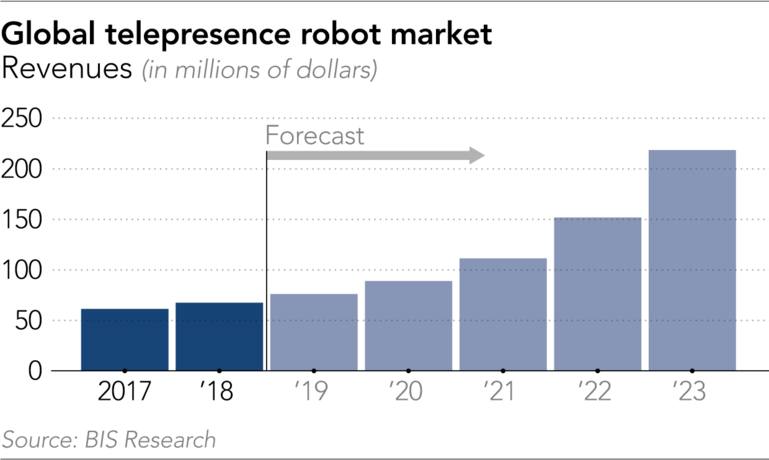 In addition to the bullish forecasts from organizations such as the World Economic Forum, ANA management also took heart from interest in telepresence being shown by major tech companies.

As for how to charge would-be users of the technology, ANA's Fukabori believes it will be critical to set a reasonable price. "It should be at least on par with a cellphone," he said.

Japan's big three telecommunications providers NTT Docomo, KDDI and SoftBank, which are all associated with the ANA project, are keen to stay involved. "ANA has a strong backbone, attracting big corporates for a collaborative project," NTT Docomo told Nikkei.

Back in Oita Prefecture, Kenji Uchida eagerly awaits the day when he can pay to have a robot moving quietly around his home.

"In the future, my daughter might cook me a dinner, or stroke my back when I am coughing," said Uchida. "She may call emergency if she sees me lying on the floor."

Uchida's ultimate dream is to recreate the days of old and see all five of his children beamed into his living room.