Taiwan's CyberLink aims to bring facial recognition to US stores NEW YORK -- Taiwanese surveillance company CyberLink plans to bring its facial recognition technology to U.S. stores in a bet that it can succeed in a market where Chinese rivals are struggling to gain a foothold.

Facial recognition has become a buzzword in recent years, with potential applications ranging from retail to security. But many mainland Chinese surveillance companies attempting to tap this market have come under intense scrutiny in the U.S. due to security concerns and the ongoing trade war.

Where others have found road blocks, CyberLink sees opportunity.

"Smart retail is one of the most [popular] industries at the moment because [companies] want to create a very personalized experience in brick-and-mortar stores," Richard Carriere, U.S. senior vice president of global marketing at Cyberlink, told the Nikkei Asian Review. "Tech helps them stay relevant now that a lot of people shop online."

CyberLink showed off this tech at the recent Global Beauty Tech Forum in New York. Its booth featured monitors equipped with a camera running FaceMe that analyzed visitors' faces as they approached. Carriere explained that FaceMe can identify age, gender, facial expression, time spent in the store and returning customers without maintaining a database of customer images or personal information, because it stores facial information as vector points rather than pictures. By tracking head position and orientation, the tool can determine what the customers are looking at in the store. The program also provides a reading showing how confident it is in each element of its analysis.

In other words, FaceMe was practically certain that the tech forum visitor was female, but only 38% sure she was angry.

The system also enables retail brands to gather information on one specific store -- local customer demographics, which section or specific item in the store is popular, and how satisfied customers are when they try out a product. FaceMe can also help identify fraudsters and recognize VIP customers throughout a company's global branches.

Technology has become a magic wand for brick-and-mortar stores looking to attract millennials, the core audience for most beauty brands, according to Laurie Du, senior beauty analyst at market research company Mintel.

"Asia's younger millennials are enthusiastic about both online and offline experiences," Du said. "We're seeing a boom in pop-up stores across the region -- and in a typical setting, visitors to these pop-up stores tend to spend enough time in-store to gain the full shopping experience as well as take photos to share on social media."

Du said she has seen an increase in the integration of augmented reality makeup tools in physical stores -- a particular boon for customers who "would rather be left alone while shopping."

Before Cyberlink introduced FaceMe in Asia last September, its facial recognition technology was already used in its subsidiary Perfect Corp.'s mobile app YouCam Makeup, which has already been downloaded more than 600 million times.

The augmented reality app lets users try out a variety of products virtually, including makeup, accessories and different hair colors and styles. Users can video chat one-on-one with beauty advisers and purchase cosmetics through the app.

Perfect Corp. has brought this app experience to brick-and-mortar stores with its Magic Makeup Mirror. The device -- which looks like an iPad with lights embedded on its sides -- offers skincare analysis and allows customers to virtually try on makeup products in the store.

With brands like Estee Lauder embracing technology, consumer attention is starting to shift back to offline channels, Mintel's Du said.

"At the end of the day, offline stores are still the perfect channel for brands to connect with consumers," Du said. "Essentially, an actual experience is not easily replaceable with photos that are found online." 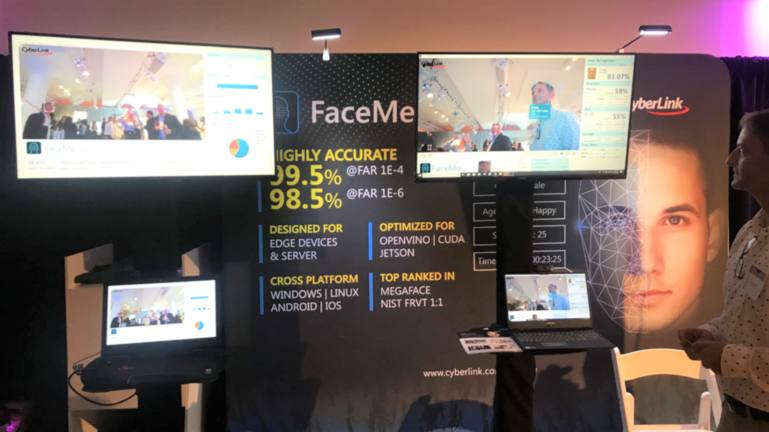 Founded in 1996, CyberLink spent more than two decades developing photo and video software before venturing into facial recognition technology. Strong sales of its multimedia software and apps around the globe helped the company rake in a revenue of NT$327.33 million ($10.55 million) in the first quarter of 2019, according to its earnings report.

Seeing the success of its subsidiary Perfect Corp., Cyberlink decided to move ahead with its own system for everything "smart" -- smart retail, smart city, smart office and smart home.

Essentially, the company can customize the FaceMe program based on a client's needs and the laws of its country, Carriere said.

The company has already found partners and launched pilot retail programs in Taiwan and Japan, Carriere said, though he did not disclose the names of those partners.

Now CyberLink is "in active conversations" to come to the U.S. It is here that its Taiwanese identity could give it an advantage.

"Several companies that were there before us come from mainland China or Russia or some countries that have more difficulties to market," Carriere said. "Because we are Taiwanese, we can basically partner, or have been partnering, with companies around the world. [Looking at] all that together, we said, 'Let's go for it,' and it has been very successful already."

A month later, Cyberlink integrated FaceMe into Taiwanese software company Syscom's Ayuda service robots, which allows the robots to identify customers and their emotions. The robots are already in use in Taiwan and Japan.

In the U.S., Cyberlink has showcased its FaceMe system at CES 2019 in Las Vegas and it is currently working toward pilot programs in America.

"We don't have any experimental stores yet, but it's coming very, very soon," Carriere said. "I don't want to jinx it, but we're almost there. Hopefully in the next few months."