Chipmaker has surpassed Qualcomm after boom in sales of midrange smartphones 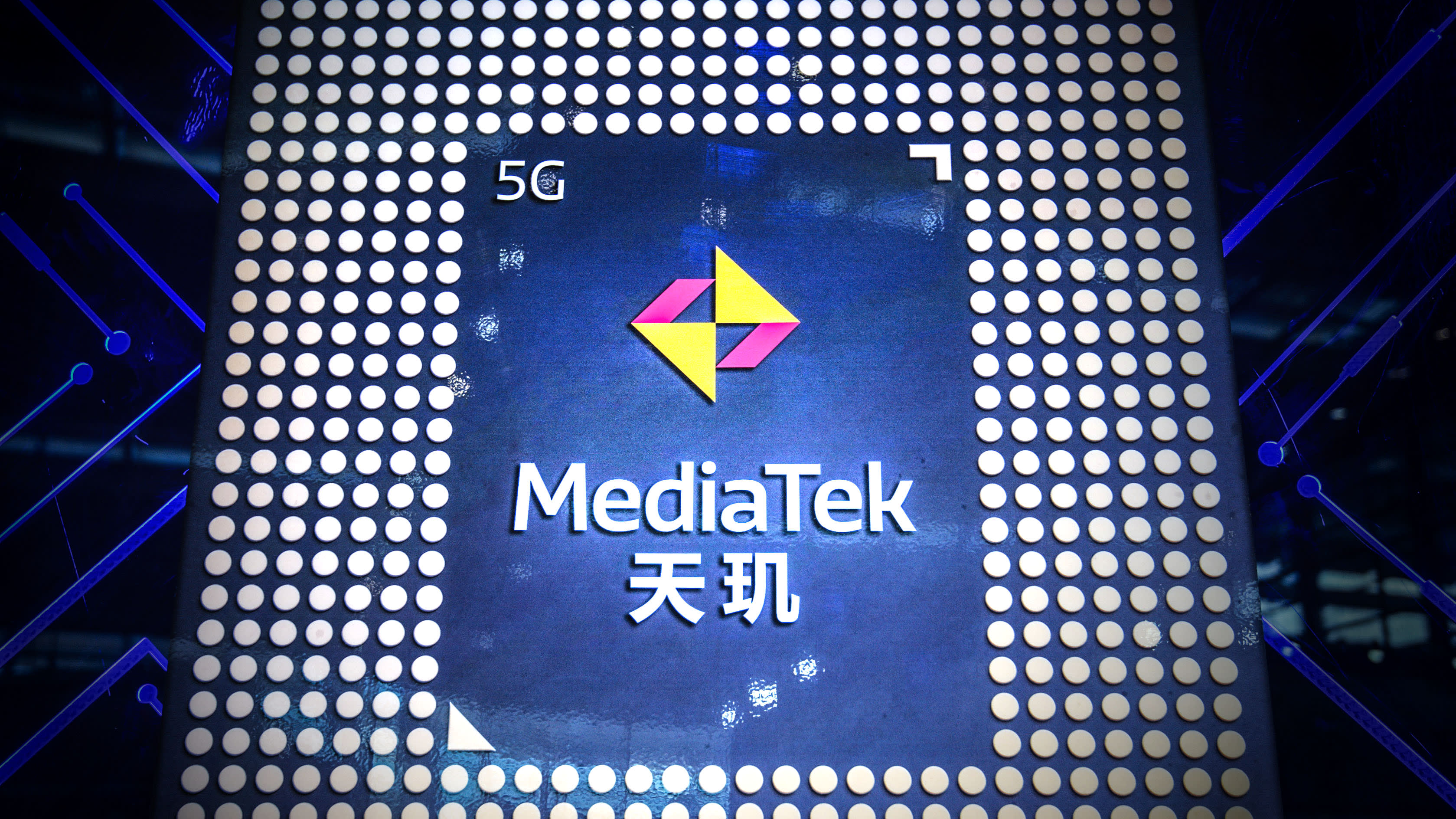 TAIPEI -- Taiwan's MediaTek has unveiled its latest flagship chipset for smartphones, betting on wider adoption of 5G devices to try to keep its status as the world's largest mobile chipmaker.

MediaTek recently overtook U.S. rival Qualcomm as the biggest seller of chips for smartphones, cashing in on booming demand for midrange handsets. The battle between MediaTek and Qualcomm is another sign of Taiwan's growing grip on key segments of the global semiconductor market.

MediaTek introduced its latest premium 5G chipset -- dubbed Dimensity 1200 --- in an online event on Wednesday, saying it said can offer 22% more computing power and a 25% improvement in power-efficiency over the previous version of its 5G chipset introduced last year. The chipset also provides better photo and video quality than the iPhone 12 range, the company said.

"We still see massive growth opportunities in 5G smartphones for 2021 and predict the market could double to more than 500 million units from around 200 million units in 2020," MediaTek Corporate Vice President JC Hsu said at the event. Hsu said MediaTek has already shipped more than 45 million units of the Dimensity 5G chipset series since early last year.

The unveiling will be seen in the industry as a response to Qualcomm, long viewed as the leader in wireless technologies, which in December released its premium Snapdragon 888 platform -- the U.S. company's first flagship integrated 5G system-on-a-chip platform. It combines a central and graphic processing chip, AI computing capability and a modem chip with 5G connectivity.

Qualcomm said the product would generate the world's fastest 5G data transfers and support more global markets from China to the U.S. by using both sub-6 and millimeter wave frequency bands. The flagship smartphone Mi11 from Chinese manufacturer Xiaomi uses it, as does Samsung's new Galaxy S21 premium phone. MediaTek's latest 5G chipset, by contrast, only supports the sub-6 frequency band, which is widely used in China and Europe, and not the millimeter wave band, which is used in the U.S.

Qualcomm on Tuesday unveiled another Snapdragon product for mid-range smartphones, a market where MediaTek has an edge. Motorola, Xiaomi and China's OnePlus and Oppo plan to use it for forthcoming handsets.

MediaTek -- which supplies most global handset makers apart from Apple -- first overtook Qualcomm by market share in the July-September quarter. It secured 31% of the global smartphone market against Qualcomm's 29%.

For 2019, Qualcomm supplied mobile processors to 33% of global smartphones while MediaTek's share was 24%, according to data from Counterpoint Research. Apple, Huawei and Samsung, the three biggest smartphone makers, all design chips for their own smartphones and had 13%, 12% and 14% of the market. 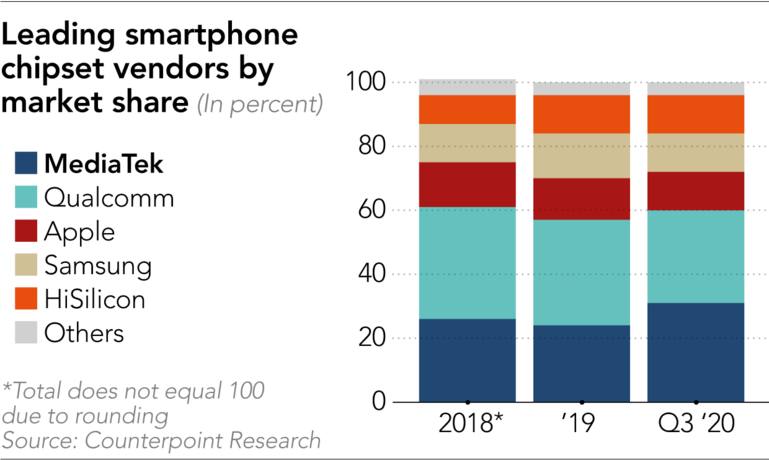 Ankit Malhotra, an analyst with Counterpoint, told Nikkei Asia that MediaTek had done well in the past year as it focused on chipsets for mid-tier handsets that sold well and generated strong performance in several emerging markets like India, the Middle East, Africa and Latin America.

"Going forward, we expect the gap between MediaTek and Qualcomm to remain very close. Qualcomm and MediaTek are competing very strongly in all price tiers and the winner may well be decided on 5G chipsets, which are expected to grow by over 100% in the next year," Malhotra said.

MediaTek and Qualcomm once saw Huawei, the world's No. 2 smartphone maker that shipped 240.6 million handsets in 2019, as their key smartphone customer. Huawei uses mobile chips designed by its own semiconductor arm HiSilicon Technologies and also buys chips externally.

However the U.S. has cracked down on Huawei by demanding that suppliers to the Chinese tech champion obtain a license if their products contain any American technologies.

While Huawei is struggling for survival, competitors have geared up to fight for its market share -- boosting MediaTek's sales.

China's overall de-Americanization efforts amid the Washington-Beijing tech war also helped the Taiwanese mobile chip developer. Xiaomi, for one, has booked aggressive orders with both Qualcomm and MediaTek for 2021, trying to expand its global presence after overtaking Apple as the world's third-largest smartphone company in the July-to-September quarter.

MediaTek suffered a serious growth crisis and deteriorating profits due to a misstep in 4G chipset development before it hired former TSMC CEO Rick Tsai as its CEO in 2017.

Tsai pushed ahead with development of a 5G-compatible chipset to step up competition with Qualcomm. In the 4G era, MediaTek's 4G chipset development was one to two years slower than Qualcomm.

The company also showed good timing last year with a foray into the supply chain for Chromebooks, where demand remains robust thanks to the need for online learning during the pandemic.

MediaTek, Qualcomm and HiSilicon are the only companies now capable of developing competitive 5G modems. Chinese local chip developer UNISOC also hopes to catch up on 5G tech but has not so far made a meaningful impact on the market.

HiSilicon was once among the industry leaders in development of 5G mobile chips and helped Huawei bring out the world's first 5G integrated chipset ahead of Qualcomm, Apple and MediaTek in September 2019. However, the company's future chip development was seriously hit after the U.S. crackdown.