TOKYO -- Taiwan's digital minister Audrey Tang is the face of civic hackers worldwide. While being lauded for developing a "mask map" app that shows stores stocked with face coverings, Tang's tech skills have always been overshadowed by her vision of using technology to advance benevolent democratic processes.

"I do not naively believe that the world will magically become a better place as long as everyone has good intentions," Tang said in a keynote at the virtual Code for Japan Summit 2020 on Oct. 17. But "digital spaces allow footprints of kindness to remain," she said, stressing that "trust will continue to accumulate" like a distributed "ledger" if people keep being kind on the internet.

Born in Taipei in 1981, Tang was a child prodigy. She started speaking at the age of eight months and subsequently scored off the charts in intelligence quotient tests.

She quit junior high school at the age of 14 after being hired by a leading Taiwanese IT company for her programming skills. A year later she opened a business before moving to Silicon Valley when she was still 19.

Identifying as "post-gender," Tang drew global attention for her programming skills by pioneering the practical use of next-generation Perl 6 through her Pugs project. Later, Tang joined Apple as an adviser. 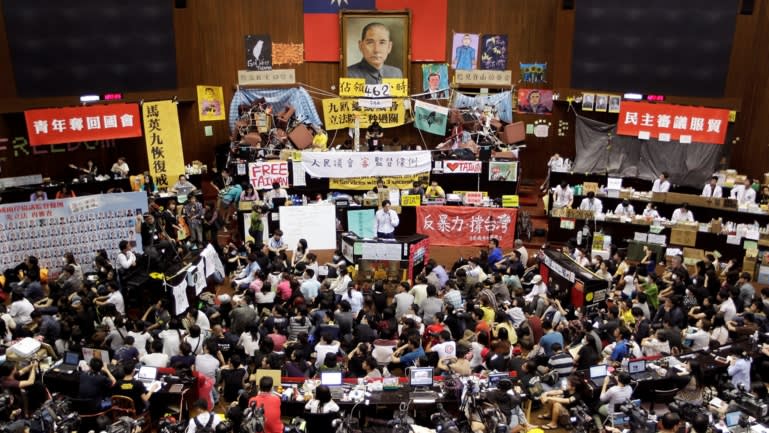 Demonstrators in Taipei occupy Taiwan's legislative building in 2014 during a protest to oppose a controversial trade pact with mainland China.   © Reuters

After leaving the business world, Tang emerged as a force in the field of civic technology during Taiwan's 2014 Sunflower Student Movement. While students occupied Taiwan's parliament building to protest a trade deal between Taiwan and mainland China, Tang helped spread awareness of their activities by creating a system to livestream the turmoil.

When Tang was 35, President Tsai Ing-wen made her minister without portfolio, the youngest person to fill such a post in Taiwanese history.

Under Tang's guidance, mask map was created, prompting other developers to use government data to release similar apps that showed real-time locations of masks for sale. The government had an existing prescription drug database, which formed the basis for tracking mask inventories. Because insurance cards in Taiwan have built-in IC chips, sales of masks could be easily recorded.

The system behind the mask map did not just suddenly appear after the coronavirus swept the word, but was a result of Taiwan's "digital democracy" established over many years by Tang and other civic hackers. A mask map app developed in Taiwan provides real-time information on the availability of masks in pharmacies.

Creating a digital democracy depends on a government implementing an "open data" policy, which ensures the timely release of administrative information as processable data.

Regarding the mask map, the Taiwan government released inventory data in the universal comma-separated value format, or CSV, which allowed easy access to information. The map is now updated every 30 seconds compared with every 30 minutes when the system first kicked off.

Since the Sunflower Movement, the government has embraced the idea of transparency via easily accessible data. In 2014, the administration of then-President Ma Ying-jeou pushed through a trade pact with China, encouraging many students to storm the legislature building and occupy it for 23 days. The demonstrators demanded that information about the deal be disclosed.

The protests were not violent. During the occupation, students negotiated online with lawmakers and nongovernmental organizations, eventually submitting a list of demands, after which the occupation ended. Tang played a vital role in the event, as it was her livestream system that hosted negotiations.

The civic tech website g0v (pronounced gov-zero) in which she participated was initially launched in 2012. The site remains active today, providing the public with a live look at legislative procedures.

Since the site's inception, Taiwanese have drastically changed their views about the disclosure of information. According to Tang, in mayoral elections across Taiwan in 2014, candidates who supported "open government" were swept into office regardless of their political allegiance. Those who did not lost out.

Another feature of the civic tech culture is the concept of the electorate creating its own public services. Tang said that the belief that people "create administrative services ... by ourselves" has already taken hold in Taiwan.

When Taiwan's national health insurance authorities posted real-time information on the availability of masks, more than 100 apps were developed in less than a week, becoming crucial conduits that employed chatbots, voice assistants, maps and other tools, Tang said in her keynote.

The civic hacker-inspired g0v site still offers code for apps and systems concerning the availability of masks. As the apps become more mainstream, developers have made them more user-friendly and accurate. The open-source system is self-perpetuating, as developers build on the success of others.

The concept of "open data" is indispensable to civic tech and requires active participation by all members of the public.

One of Tang's political credos is "radical transparency," under which all information concerning government -- excluding diplomacy, defense and other confidential activities -- should be disclosed online so that citizens can engage with the government on an equal footing.

The results of this can be seen on g0v through its dynamic representation of public finances. Each government agency is displayed as a colored ball, which shows the percentage of the total budget. Placing a cursor over a ball brings up bar charts that display annual allocations, clearly showing how tax monies are being allocated. 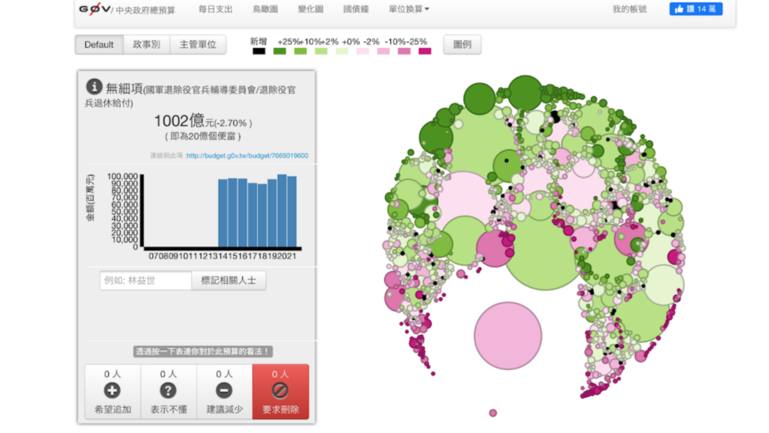 For example, as the chart expands, budget appropriations for retired military veterans can be seen, potentially flagging larger-than-expected outlays. Information as far back as 2014 can be displayed, and moving the cursor over the different points reveals even more budget details.

The system provides an easy-to-grasp visualization of the government budget.

Tang has also established an interactive platform called v-Taiwan, on which government officials, citizens and experts discuss pending legislation. The platform has paved the way for such legislation as permitting online liquor sales and entry by Uber and Airbnb into the domestic market.

Taiwan was under martial law when Tang was born in 1981. The island's first presidential election was held in 1996.

To Tang, democracy means technology, she said during a talk with Haruyuki Seki, founder and director of Code for Japan, a nonprofit organization aimed at helping local governments and communities address issues through IT. Tang said that democracy cannot be taken for granted, hence she considers it natural to improve and update it, like technology, through open-source technology. Tang maintains close contact with civic hackers overseas, including those in Japan. (Photo by Toshiyuki Kumagai)

The internet has recently been cast as a divider and destroyer of democracy. In reality, the internet is a border-free construct, but one that should not be left to anarchy. If seen as a place to record the kindness of people and accumulate trust as mentioned by Tang, the internet can be a tool to support democracy.

Will civic tech extend beyond Taiwan and help achieve social changes in Asia and the world?

Well-versed in philosophy and religion as well, Tang referred Japanese civic hackers to a Buddhist proverb: The darkness in a 1,000-year-old room can be eliminated by a single lantern."

The live broadcasting of activities in the legislative chamber, made possible by Tang during the Sunflower Movement, continues to serve as a lantern to eliminate darkness in Taiwan. What kind of beacon will be created by the rest of Asia?