China controls much of the world's supply of rare-earth metals, which go into everything from smartphones, to electric cars to medical equipment.   © Reuters
CHENG TING-FANG and LAULY LI, Nikkei staff writerSeptember 14, 2021 15:16 JST | China
CopyCopied

TAIPEI -- Electronic hardware manufacturers are sweating as prices for rare-earth metals surge amid soaring demand and simmering tensions between the U.S. and China, the world's most important source of these vital materials.

For Max Hsiao, senior manager of an audio component maker based in Dongguan, China, the squeeze is coming from a magnetic alloy known as praseodymium neodymium. The price of the metal, which Hsiao's company uses to assemble speakers for Amazon and laptop maker Lenovo, has doubled since June last year to around 760,000 yuan ($117,300) a ton this August.

"The rising cost of this key magnetic material has been overwhelming, and that knocked at least 20 percentage points off our gross margin. ...That's really a huge impact," Hsiao told Nikkei Asia. "We don't see this trend reversing anytime soon."

Praseodymium and neodymium belong to a category of metals known as rare-earth elements and are used to make neodymium-iron-boron (NdFeB) magnets. These permanent magnets, as they are known, are essential to a swath of tech gear -- everything from speakers and electric vehicle motors to medical devices and precision munitions.

Hsiao's headaches are typical of many hardware makers. Demand for rare earths has risen sharply due to their increasing use in cutting-edge technologies, including the booming electric vehicle industry, while the economic recovery from the coronavirus pandemic has fueled demand for electronics.

Geopolitics are only making matters worse.

China is the only country that has a complete supply chain for rare earths from mining, to refining, to processing. As of last year, it controlled 55% of global production capacity and 85% of refining output for rare-earth elements, according to commodity research specialist Roskill. In January, Beijing hinted that it could introduce tighter controls exports, sparking higher prices.

Rare earths such as neodymium oxide -- a key input for motors and wind turbines -- have jumped 21.1% since the beginning of the year, while holmium, which is also used in magnets and magnetostrictive alloys for sensors and actuators, have surged nearly 50% so far this year, according to Shanghai Metals Markets. 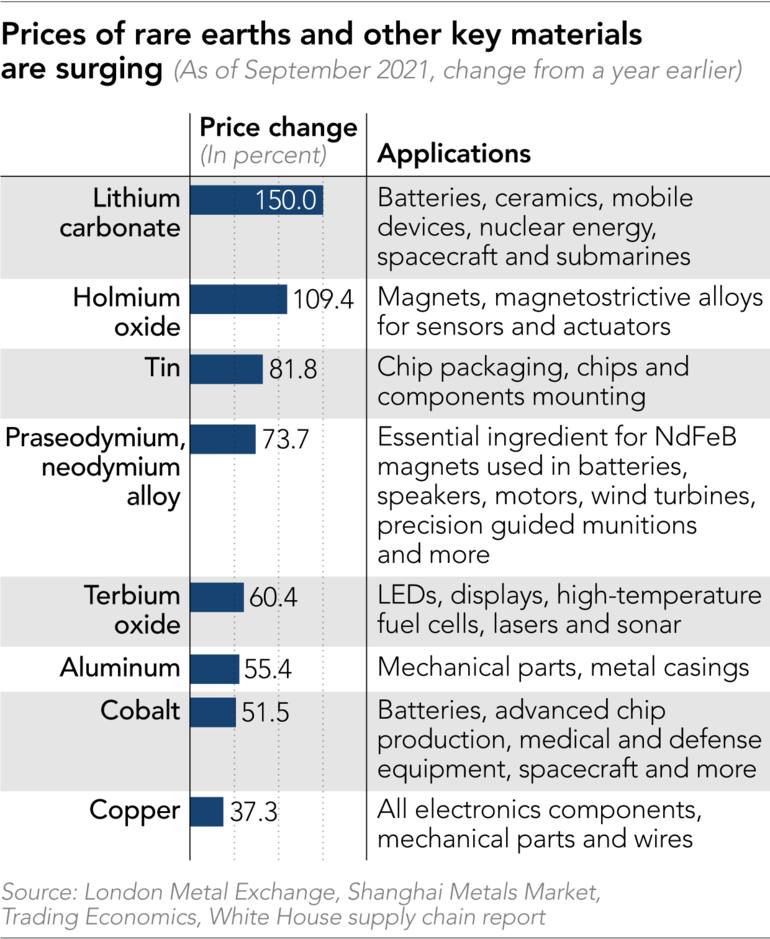 Washington has accused Beijing of using its control of rare earths for diplomatic ends in the past, saying China restricted their export to Japan in 2010 and 2011 due to a territorial dispute between the two countries.

Hsiao, the audio component executive, said tin has almost doubled in price from a year ago, citing the company's procurement data.

With Beijing and Washington locked in a battle for tech dominance, analysts say China's control over supplies of rare earths and other metals could give it a way to push back against U.S. pressure.

"China has the upper hand and dominated production and refining of global key rare earth materials, and it also controls some other key metals that are all needed for building not only civilian, and industrial devices but military and aerospace equipment," said Angela Chang, an analyst with the Industry, Science and Technology International Strategy Center (ISTI) at the Industrial Technology Research Institute told Nikkei Asia. "The Chinese advantage has become a key bargaining chip for Beijing to negotiate with Washington." The escalating tension between the two superpowers likely will only push prices of those key materials higher in the long term, Chang added.

The first to feel the impact of such price rises will likely be smaller and midsize electronics component makers, as they are unlikely to pass on all the costs to their global clients, such as HP, Dell, Apple and Samsung, as well as major carmakers.

"Prices of copper, aluminum, tin, and nickel have been on the rise. The pace is fast, and we could not pass on the costs to our clients in time, so it is all reflected in our earnings," an executive with a mechanical parts supplier told Nikkei Asia. The company uses a massive amount of copper, aluminum and tin to make mechanical parts for thermal solutions used in smartphones, notebooks, servers and data centers.

Even without the political factor, the growing adoption of new products and technologies such as smart vehicles and 5G is set to keep prices for rare earths and other raw materials high.

"Future electric vehicles will also consume more rare-earth materials, including praseodymium and neodymium and others," Hou Jinchen, an analyst with Shanghai Metals Market, told Nikkei Asia. "There will still be fluctuations, but generally the higher price of all kinds of basic key materials could become a new normal for the future."

Steve Lin, chairman of Auras Technology, a leading thermal solutions provider to Apple, Dell, Facebook and Amazon, said rising prices for raw materials such as copper pushed his company's gross margin down to around 18% in the first half, below its average of 20%.

"We've been trying to negotiate with our clients, and some have agreed to help absorb some of the costs for raw materials. We hope our gross margin can bounce back to 20% in the remainder of this year," Lin told investors last week.

"China controls the majority of the material and we mostly buy these raw materials from Chinese suppliers," a Synergy executive said. "We monitor raw materials prices very closely, but it has become a growing burden for our business."