Tech standouts go full on, all the time

These days, more than ever, all tech is online tech. The 2018 winners of the Nikkei Superior Products and Services Awards, in one way or another, all help people and things talk to one another, from an AI software development tool, to a pocket size translation device, to a web-enabled medical checkup service, the latest standout hardware and services are all on, all the time. Chainer is open-source software, letting anyone create deep-learning programs. Preferred Networks has carved out a niche in the face of challenges from big rivals, including Google. The company continues to hone its technology, working to increase processing speed, for example. Solid-state batteries that do away with liquid electrolytes are expected to play a big role in the development of advanced power cells. TDK's CeraCharge is a rechargeable battery that fits on a fingertip and eliminates the need for replacements. And because it uses only solid materials, CeraCharge will not leak or catch fire, TDK said. The company is producing 30,000 CeraCharge batteries a month.

Together with a computer chip manufacturer, TDK has developed a module that includes a temperature, humidity and light sensor module along with the battery. The company hopes to incorporate CeraCharge into internet-of-things equipment, among other uses. Installed in homes, offices or factories, the sensor package can control air conditioning and lighting, helping cut electricity costs.

Toyota Motor released a new Crown luxury sedan in June 2018 that qualifies as a connected car. Toyota's first full makeover of the Crown in five and a half years is the Japanese automaker's 15th iteration of the model, which first hit the streets in 1955. The company reached its year-end sales target of 35,000 vehicles by the end of November and beat its initial 2018 goal by around 30%. 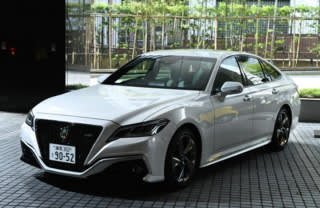 The new Crown starts at 4.6 million yen ($41,500). One of its main selling points is its onboard communication device, which comes as standard equipment. Using the accompanying app, the diver can tell the system his or her destination, enhancing safety. Dealers can warn the owner when the battery is dying or when other problems appear, preventing roadside trouble.

The service is free for three years from the purchase date. From the fourth year, there is an annual fee of 16,000 yen. The onboard system allows drivers to speak to call center operators and receive information while on the road, a feature that is popular with customers, Toyota said. Most of the Crown's buyers are over sixty years old, indicating the car is meeting replacement demand. Pocketalk is a palm-sized device that translates spoken sentences into as many as 74 languages and dialects. The user chooses a language pair on screen, say, Mandarin to Spanish. The user speaks into the device, which translates the sentence into the desired language in spoken and written form. The base-model Pocketalk can handle 63 languages and its accuracy enhanced by using a number of translation engines in the cloud. A model that comes with a SIM card compatible with communications networks worldwide goes for 29,800 yen, excluding consumption tax. The Wi-Fi-only model sells for 24,800 yen.

In September, the company released the Pocketalk W, which can handle 74 languages, with Indian English and others added. The model has a 2.4-inch liquid crystal display, about three times larger than that of older models. The touch-panel lets users operate the device in much the same way as a smartphone. According to research specialist BCN, the Pocketalk series held 97.5% of the voice translator market as of October 2018 by monthly unit sales. The gadget is popular with both travelers and business people. Clinics helps people who are physically unable to visit a hospital, who are busy or who have no specialists close by. It reduces hospitals' patient load and makes better use of limited medical expertise. Online medical services were added to the list of items covered by Japan's health insurance system in 2018, although it is limited to specific illnesses and procedures. Coverage is likely to expand in the future.