Newcomers seize opportunities as sanctions shut out Huawei and ZTE

TOKYO/GUANGZHOU -- With fifth-generation wireless networks set for launch across developed markets in the coming months, competition is intensifying among manufacturers of mobile infrastructure equipment.

But the small group of companies that have dominated the market for 3G and 4G networks faces considerable disruption as the industry goes through a period of upheaval not seen in over a decade.

To the surprise of just about everyone in the industry, Nokia and little-known U.S. startup Altiostar Networks won the rights to build Rakuten's new mobile network in Japan earlier this year, beating rival bids from Huawei and Ericsson, the two biggest players by global market share.

The e-commerce giant will become Japan's fourth mobile provider in October. And although it initially plans to launch only 4G services, the deal was of huge significance; in an industry where new players come along so rarely, so too do chances to form long-standing partnerships.

"We will be able to further reduce our investment in 4G from an initially estimated 600 billion yen ($5.28 billion) by combining a hugely experienced manufacturer and a company with new technologies," Yoshihisa Yamada, president of Rakuten Mobile Network, told an open hearing at the Ministry of Internal Affairs and Communications on Oct. 3.

Those cost reductions, Yamada hopes, will result from an industry shift from dedicated to general-purpose equipment.

In the past, base stations required specially designed devices, and entirely new equipment needed to be installed for every generational shift -- something that happens roughly once every 10 years.

Commoditization -- that is, a move toward standardized products -- means that software now reduces the need for new installations.

"We will be able to handle 5G just by updating software at [4G base stations]," Yamada said, suggesting that Rakuten planned on using the same suppliers when it makes the switch.

Japan's frequency bands for 5G will be assigned by the end of March, and carriers are expected to place huge orders for network equipment.

As each 5G base station covers a smaller area than with 3G and 4G networks, carriers are looking to build denser networks using cheaper and more compact stations.

"There is a good possibility that companies like Altiostar will spell the end for the likes of Ericsson and Huawei," said Yuichiro Takagawa, a researcher at Tokyo's Waseda University and an industry veteran.

In addition to new companies joining the race, the trend throws open the door for existing players to catch up or overtake the leaders.

Samsung Electronics, for example, has managed to fill a void in the U.S. market left by Chinese manufacturers Huawei and ZTE.

"Samsung is good at technologies that use 28-gigahertz and other high-frequency bands, which have been adopted by 5G," said an industry official. Verizon Communications launched the world's first commercial 5G services in parts of the U.S. on Oct. 1, and rival AT&T plans to follow suit in more than 10 cities by the end of this year.

Both companies will use Samsung and Ericsson base stations, with AT&T also being supplied by Nokia.

That means Huawei, the world's largest maker of infrastructure equipment by sales, has reached an agreement to supply base stations to just one of the first five carriers to launch 5G services.

Huawei and fourth-ranked ZTE have effectively been shut out of the U.S. market amid rising tensions between Washington and Beijing.

American companies were barred from dealing with ZTE on national security grounds for a time earlier this year, and Huawei CFO Meng Wanzhou was recently arrested in Canada on suspicion of involvement in breaching U.S. sanctions against Iran.

All four of Japan's carriers have decided against using Huawei and ZTE equipment for their 5G networks. In addition, Tokyo has effectively banned government ministries and the Self-Defense Forces from buying Chinese telecommunications equipment. Though Huawei Technologies held the top share of base station sales worldwide in 2017, the Chinese company has an agreement to supply stations for just one of the first five carriers to launch 5G services.   © Reuters

But by closing the door to Chinese companies, Japan and the U.S. risk delaying the rollout of commercial 5G services.

China Mobile and other state-owned carriers are pushing ahead with the construction of 5G infrastructure, and investment in the technology is expected to top $400 billion over the five years through 2020, according to Deloitte Tohmatsu Group.

The country already has 350,000 5G-ready base stations, more than 10 times as many as the U.S. The number of subscribers for 5G services is expected to total 430 million in 2025, making the Chinese market 130% larger than that of the U.S.

Chinese regulators may begin issuing 5G licenses by the end of the year, and base stations are ready for commercialization, said Wu Hequan, president of the Internet Society of China, at a conference in November.

Economies of scale mean Huawei and ZTE can make equipment for base stations for 20% to 30% less than their international peers. The former has shipped components and other devices for more than 10,000 stations in 66 countries.

More importantly, Chinese manufacturers have a significant advantage in terms of communications standards.

Since the days of 3G, China has promoted technological development of time division duplex communication systems -- in which signals share the same frequency band by being allocated different time slots.

This format has become the standard for 5G networks, as it is better suited for broad high-frequency bands than frequency division duplex, which has been promoted in the U.S. and Europe.

Samsung and its European peers do make TDD-based equipment, but Chinese manufacturers are technologically superior, according to experts. Chinese antenna technology is "several years ahead of Western rivals," Ming Xiao, president of sales for ZTE, said in reference to multiple-input multiple-output technology at a conference in Italy in November. MIMO is essential for the large-volume, high-speed communication on which 5G relies.

There are also signs of a realignment in the industry, and Japanese companies that have lost ground to Chinese and European rivals may well become acquisition targets.

Of Japan's three current mobile carriers, only NTT Docomo continues to use domestic companies, namely NEC and Fujitsu, for its base stations, according to Tokyo-based research company MCA.

This arrangement, which is not exclusive as NTT also procures from Nokia, dates back to when the two suppliers made telephone switchboards for what used to be Nippon Telegraph and Telephone Public Corp.

Without these historical ties, it is likely NEC and Fujitsu would have been swallowed up in the kind of consolidation already seen in other markets. The onset of 5G is expected to shake up the industry. 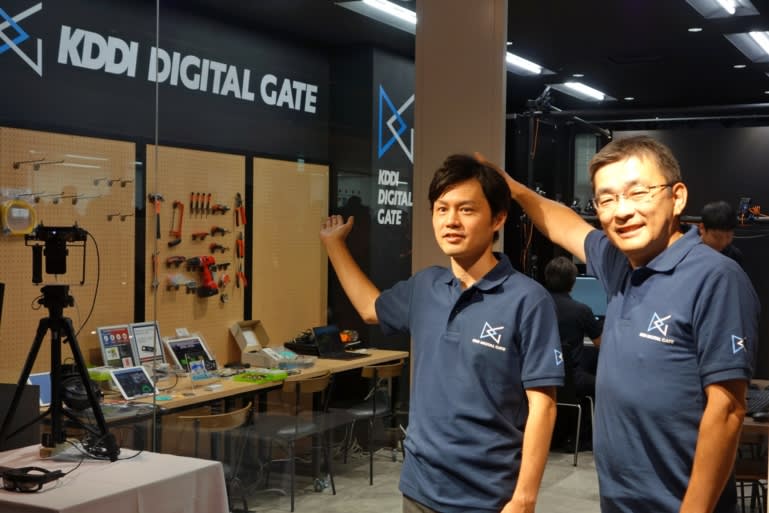 A business development base for 5G opened by Japanese mobile carrier KDDI. A Samsung-made base station enables testing of the next generation of mobile communications. (Photo by Isao Horikoshi)

Samsung and Huawei increased their presence in Japan in fiscal 2017, after reaching deals with KDDI and SoftBank, respectively, said MCA researcher Taro Daimon.

As it becomes clear that they can no longer keep up in terms of technological development, NEC has entered a tie-up with Samsung, and Fujitsu has done so with Ericsson.

Kim Jaewon in Seoul, Coco Liu in Hong Kong, Lauly Li and Cheng Ting-Fang in Taipei contributed to this report.