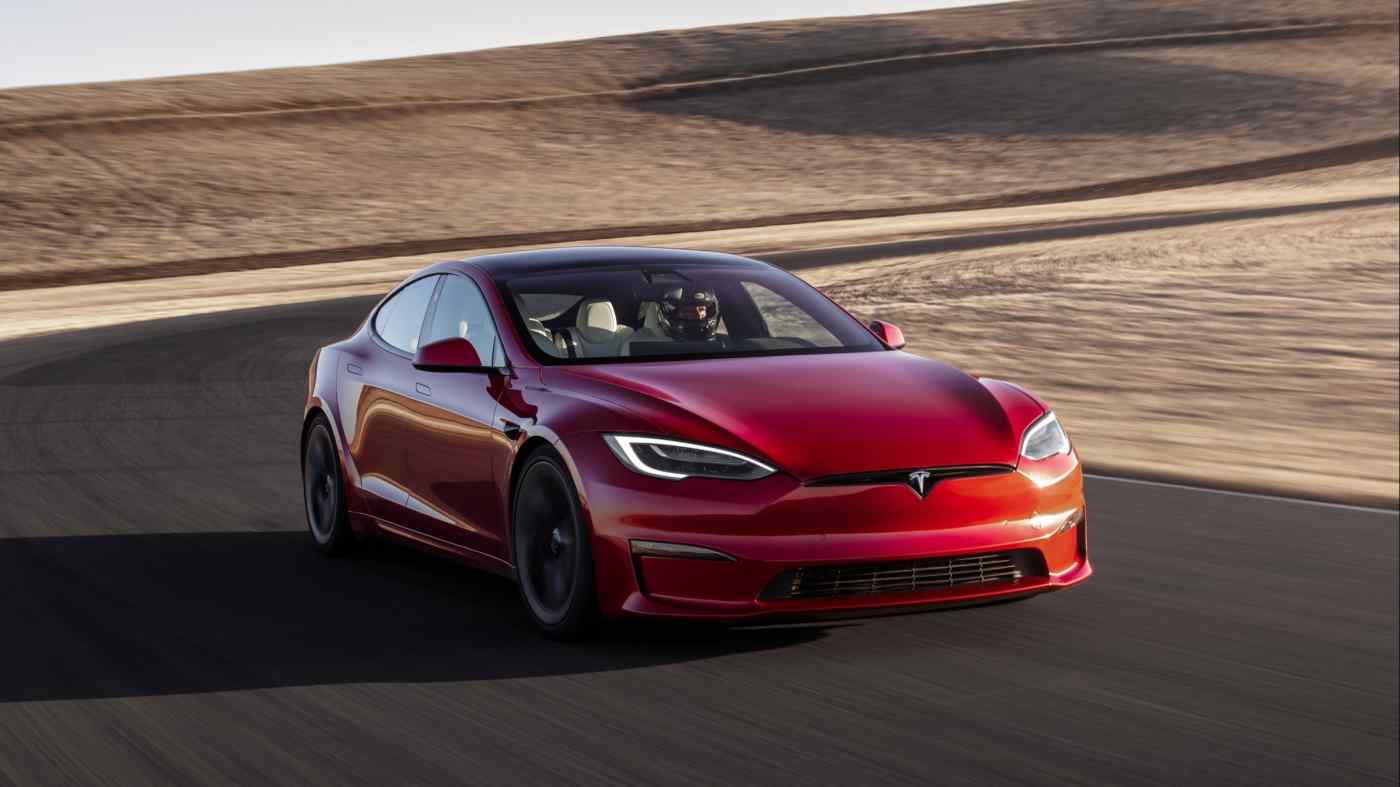 TOKYO/PALO ALTO, U.S. -- When examining Tesla's expansive portfolio of patents, it's not only the futuristic technology that stands out -- from a built-in valet feature that eliminates long walks through the parking lot or the impressive acceleration in its latest redesign -- but also the sheer volume of innovation that helps it maintain its position as the world's leading manufacturer of electric vehicles.

Tesla remains a poster child for headline-grabbing innovations. The company started delivering its fully redesigned luxury Model S sedan in June. The highest-performing model in that product line, the Model S Plaid, can go from zero to 60 mph (96.6 kph) in just 1.99 seconds, which Tesla says is the fastest for a consumer vehicle.

But what sets Tesla apart from the competition is the less conspicuous technology that does not have much to do with driving ability, at least on the surface. Apart from artificial intelligence and other advanced tech, the company has ramped up development of safety features in recent years.

Tesla has accumulated over 580 patents from its founding in 2003 through March 2021, according to a study of applications and disclosures Nikkei conducted jointly with Intellectual Property Landscape, a Tokyo analytics company.

Most of the patents, 281, can be classified as electrical machinery, followed by 168 tied to transportation, a category that includes user operation. Patents relevant to user experience have climbed in particular.

In 2018, Tesla applied for a patent for a steering system that will allow the car to be operated via touch screen. A vehicle can be controlled by making swiping or clicking gestures on the flat interface, and a user can receive tactile feedback as if a real button has been pushed.

Tesla applied to patent the Smart Summon feature in 2019. The innovation, which allows the user to switch the car to Autopilot to retrieve or park the car even if they are outside the vehicle, was introduced that year.

The next biggest batch of Tesla patents, at 71, can be classified under semiconductors, a category that includes solar cells. In 2016, Tesla bought the solar power generation startup SolarCity. In 2017, the company name Tesla Motors was changed to simply Tesla.

From that point on, Tesla has expanded from an EV maker to an energy company focused on batteries. The company holds patents in moisture-resistant solar cells, as well as in solar panels that look like regular roof tiles.

In May, Tesla disclosed a patent application for a retractable solar truck bed cover which was filed in 2020. The industry is abuzz with speculation that the retractable cover will be included in the Cybertruck, the development of which was revealed in 2019. Tesla's Cybertruck is displayed at Manhattan's Meatpacking District in New York City on May 8.   © Reuters

Computer technology is the fourth-biggest tranche of Tesla patents at 60. Until as late as 2017, Tesla applied for less than 10 patents in this category each year. The company then applied for 18 patents in 2018 and 17 patents in 2019. The annual pace is exceeding that for transport.

Many of these patents are associated with machine learning for autonomous driving. The patent applications include those for systems that process AI errors as well as tech that encrypt self-driving data. This shows that Tesla is pouring resources into safety and security features.

Tesla has been recruiting high-profile engineers who have made names for themselves at Apple and big-name chipmakers. The new hires have helped the company launch development for autonomous driving chips.

In 2019, Tesla announced it had developed its own processing units called full self-driving computers, or FSDs, in-house. The FSDs boast better performance than the GPUs the automaker had been procuring from U.S.-based Nvidia. Starting that spring, all Tesla cars delivered were equipped with the FSDs.

An FSD is able to compute 144 trillion operations in a second, which Tesla says will make completely autonomous driving possible. In 2019, Tesla bought DeepScale, the U.S. startup that develops environmental recognition technology for driverless vehicles.

Autonomous driving developers, such as Waymo, a subsidiary of Google parent Alphabet, normally adopt lidar sensors to recognize obstacles. But Tesla CEO Elon Musk has argued that lidar -- a method that sends pulses of laser light to determine the presence, shape and distance of objects, often in great detail -- is needlessly expensive.

Tesla is instead developing tech that measures the distance to an obstacle using camera footage and machine learning. The company has added patents through that endeavor. Tesla CEO Elon Musk, left, and Apple CEO Tim Cook: Tesla has been recruiting high-profile engineers who have made names for themselves at Apple and big-name chipmakers.   © Reuters

The integration of software and the hardware of vehicles has been Musk's cornerstone strategy. Tesla vehicles are upgraded regularly through "over-the-air" updates. Even complete autonomous driving can be brought to reality through a software update.

There are 29 patents in Tesla's portfolio related to thermal process and apparatus, placing it eighth in number. Although the collection appears small, the contents demonstrate Tesla's strength in maintaining its competitive advantage.

The heat generated from batteries greatly impacts an EV's performance. If heat builds up, it could also affect safety. A Tesla vehicle gets electricity from an array of small, cylindrical lithium-ion batteries, meaning controlling heat will be crucial.

When Intellectual Property Landscape ranked heat control patents data from different companies based on number of citations and versatility, Tesla's patent for a thermal management system with a coolant loop came out on top.

Tesla derives strength from its octovalve, a component that redistributes the heat given off by the battery to other parts of the vehicle, including to the air conditioning system. The octovalve was first installed on the Model Y sport utility vehicle that went on sale last year.

Automobiles normally regulate heat on a part-by-part basis, but Tesla aims to optimize thermal regulation throughout the whole vehicle. The coolant loop patent forms the basis of that heat regulation.

"We can assess from the patents that [Tesla] is making steady efforts in manufacturing," said Yamauchi.

In Tesla's patent applications, the name that appears most as the inventor is Franz von Holzhausen, the company's chief designer who had a stint at Mazda Motor in the 2000s. He contributed to about 80 design patents, or nearly twice the number of the second-leading inventor.

Von Holzhausen had a hand in the dashboard display in the Model S, as well as in the upswinging Falcon Wing doors on the Model X.