TOKYO -- Toshiba and Fuji Electric will invest a combined 200 billion yen ($1.9 billion) to ramp up output of power-saving chips for electric vehicles to accommodate the sharp shift by governments around the world toward electrified cars and trucks, Nikkei has learned.

Toshiba will spend about 80 billion yen through the fiscal year ending March 2024 to add production equipment at its factory in Ishikawa Prefecture, Japan. The group's capacity for producing wafers will climb to 200,000 wafers a month from 150,000 wafers.

The extra wafers will be delivered to Japanese automakers and to automakers in China and elsewhere. Toshiba is strong in low-voltage products that process 300 volts or less of electricity efficiently.

The Tokyo-based company looks to grow sales in the power semiconductor segment by 30% to 200 billion yen from roughly 150 billion yen currently. It already supplies power converters for electric grids.

Separately, Fuji Electric will invest 120 billion yen through fiscal 2023, both at home and abroad. Production capacity at a factory in Japan's Yamanashi Prefecture will be increased 30% this fiscal year compared with 2019.

The company plans to upgrade capacity at plants in Malaysia and elsewhere outside Japan to enable workers to turn finished products out of parts manufactured in Japan. 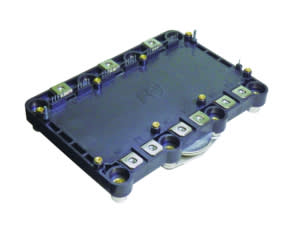 An automotive power semiconductor module made by Fuji Electric.

The global power semiconductor market stood at 1.46 trillion yen in 2019, according to U.K.-based research firm Omdia. Germany's Infineon leads the market, while the Japanese contingent of Toshiba, Fuji Electric and Mitsubishi Electric has a 20% slice.

The market is expected to grow at a 6% annual clip due to rising equipment demand from the electric vehicle and renewable energy sectors.

Mitsubishi Electric is the No. 2 maker of IGBT modules, a type of power semiconductor. The Tokyo-based company will deploy a Hiroshima Prefecture factory acquired from Sharp to raise capacity. It will spend 20 billion yen to start operations at the new plant next November. Total production capacity will double in fiscal 2022 from fiscal 2019.

Tokyo, Europe and other places have moved to ban gasoline-burning autos by certain dates. These policy changes have accelerated the shift to electric vehicles.

Global power semiconductor players are following suit. Infineon spent 1.6 billion euros ($1.9 billion) building a new factory in Austria. The company announced in May it has completed the building shell, and plans to start up the facility at the end of 2021.

On Semiconductor, the No. 2 player based in the U.S., acquired a factory from American contract chipmaker GlobalFoundries in the state of New York. Production started at the location during the 2020 fiscal year. On Semiconductor is spending a total of $430 million on the acquisition through the end of 2022.

Although the top two power semiconductor manufacturers are headquartered outside of Japan, the sector is still considered one where the Japanese contingent asserts a presence. Although corporate earnings have suffered amid the coronavirus crisis, Japanese power semiconductor makers have decided to invest heavily to establish new supply chains so they will not be left behind in the up-and-coming electric vehicle industry.

The Japanese government looks to attain net-zero greenhouse gas emissions by the year 2050. Officials plan to roll out tax incentives for power semiconductors and other energy-saving products. Japanese automakers have fallen behind their Western counterparts when it comes to decarbonization. Japanese parts suppliers that have built up a worldwide clientele will spend money to make sure they can ride the carbon-free wave.