Under the sea and in space, GS Yuasa batteries provide the power

KYOTO -- Battery makers worldwide are fighting for a piece of the pie in the lucrative electric vehicle market, spending huge sums on factories.

But GS Yuasa, a Japanese battery manufacturer that goes back more than a century, is going its own way. The Kyoto-based company develops power cells that can withstand extreme environments, from under the ocean to outer space.

Betting on a coming era of ubiquitous battery power, GS Yuasa has gone back to its creed: "Performance is the source of competitiveness."

Kounotori an unmanned transport vehicle built by the Japan Aerospace Exploration Agency, or JAXA, delivered the GS Yuasa batteries to the station. It was the fourth such delivery, with the first taking place in 2016. With the latest delivery, all batteries aboard the space station have been replaced with GS Yuasa's lithium-ion power cells. They are the first batteries used by NASA manufactured by a non-U.S. company.

The International Space Station gets its power from solar panels. When it moves to the dark side of the Earth, it is powered by electricity stored in batteries. The station, which circles the Earth once every 90 minutes or so, charges and discharges its batteries 16 times in a day.

The batteries used in the space station have a service life of more than 10 years in the unforgiving environment of outer space. Considering that smartphone batteries' performance begins to deteriorate after several years of charging and discharging once or twice a day, the batteries installed on the space station are very rugged. 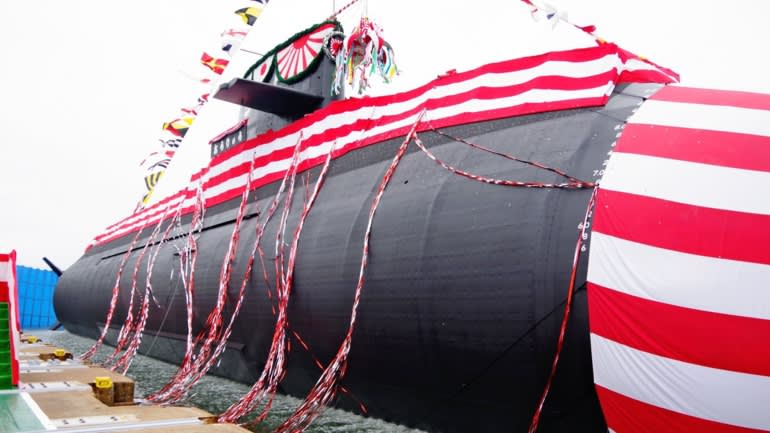 The Oryu, the first of a new generation of ultra-quiet Japanese diesel-electric submarines, is powered by GS Yuasa lithium-ion batteries.

GS Yuasa's batteries, in addition to soaring to great heights, also plumb the depths. They are found aboard a new model Japanese submarine that is the world's first to carry lithium batteries onboard. The Oryu, the first of the new class of submarine, was delivered to the Ministry of Defense at a Mitsubishi Heavy Industries shipyard in the western city of Kobe. The batteries are charged using a diesel generator. The batteries, in turn, power the motors that drive the sub through the water on its stealthy missions.

This allows the vessel to operate nearly silently, making it hard for potential enemies to track. Using lithium-ion batteries, which can store more power than conventional lead-acid batteries, allows the sub to spend more time underwater.

GS Yuasa was making lead-acid batteries for submarines when it began working with the Defense Ministry and Mitsubishi Heavy to design a new type of power cell for subs in the first half of the 2000s. The result was a lithium-ion battery that passed the tough safety and durability criteria required for use in submarines. The company has built a plant dedicated to manufacturing the batteries in the western Japanese city of Kusatsu.

GS Yuasa's lead-acid batteries have a high global market share and have a wide range of uses: The company is the world's top manufacturer of motorcycle batteries, with an 18% share in the year ended March. It is also among the top battery makers for four-wheeled vehicles, with a share of 8%.

The company places a premium on safety and reliability. Among the tools it has developed for the task are a simulator that can test battery safety without actually making a prototype, a device to reduce the risk of overheating and fires, and sturdy casings for power cells. "Our rivals can't match them," says, Osamu Murao, GS Yuasa's president. 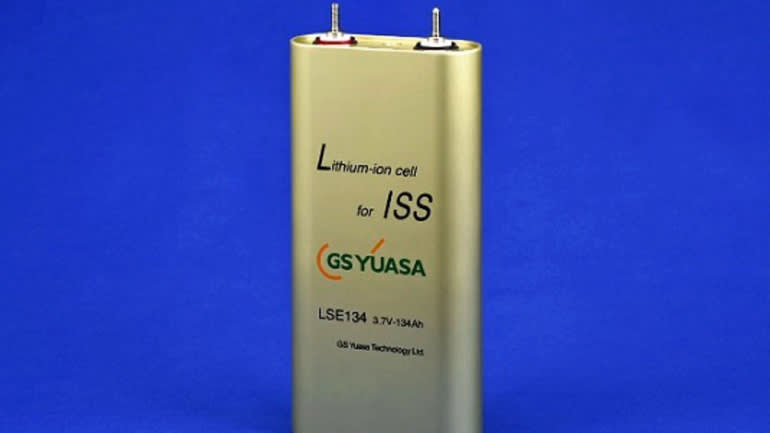 GS Yuasa’s lithium-ion batteries like the one shown here supply electricity to the International Space Station.

GS Yuasa filed 802 applications for lithium-ion battery-related patents in Japan between 2009 and 2015, according to figures from the Japan Patent Office. That puts it at No. 4 in Japan, behind Toyota Motor, Panasonic and Toyota Industries.

The segment's operating margin is around 2%, underperforming the average of 5% for all segments. Still, honing the technologies needed to ensure battery reliability in extreme environments is essential to the company's growth plans.

Murao says GS Yuasa places great hopes on a new generation of lithium-ion batteries, which will pack three times as much power into a given volume as batteries on the market today. "They may become the go-to batteries for telecom base stations suspended [on drones] in the sky," he says.

The company is taking part in a project to develop technology for electrically powered aircraft, led by Japan's New Energy and Industrial Technology Development Organization. Its role is to create a next-generation battery for such aircraft. With planes, keeping weight to a minimum is key, and batteries are heavy. The problem is that as the power density of a lithium-ion battery rises, so does the risk of it catching fire. GS Yuasa is working to solve this problem.

Tang Jin, a senior researcher at Mizuho Bank, said GS Yuasa's next-generation battery "may still have cost issues, but it is expected to prove viable for use in ships and drones. It has the potential to become a new pillar of [the company's] growth."

Electricity is set to replace fossil fuels as a power source in a wide range of applications beyond cars. As Internet of Things technology takes hold, batteries are likely to find many more uses. This will prove lucrative for a specialist in highly durable and safe batteries such as GS Yuasa.

And if space travel becomes as commonplace is in astronaut Noguchi's vision, GS Yuasa's batteries will probably be along for the ride.