BANGKOK -- The coronavirus outbreak has accelerated the development of the robotics industry in Thailand, as companies race to devise solutions to meet increased hygiene and medical needs.

Robotics is one of 10 strategic sectors that the government wants to focus on, but the industry's development had been slow until now. The coronavirus pandemic has moved things forward rapidly and companies have now developed robots that can take body temperatures, check mask usage, as well as conduct remote medical examinations.

Tops Market, a supermarket chain in Bangkok, was one of the first retailers to use robots in the pandemic. In late April, the company placed a monitor at the front of the store that can read customers' temperatures. Anyone with a temperature above 37.5 degrees Celsius will trigger an alarm and denied entry.

The device was developed by Central Tech, a subsidiary of Central Group, the largest retailer in Thailand. Using facial recognition technology, the monitor also sounds an alarm and prevents customers from entering if they are not wearing masks. Central Group plans to install the machines at 15 stores -- most of them either Tops Markets or FamilyMart convenience stores -- in Bangkok by the end of May.

When CentralWorld, a shopping center in Bangkok, resumed operations on May 17, it introduced a new worker: a four-legged, mobile robot "K9" developed by Advanced Info Service, the largest telecommunications company in Thailand. A bottle of hand sanitizer is mounted on the back of the robot which approaches shoppers in its vicinity, encouraging them to sanitize their hands. 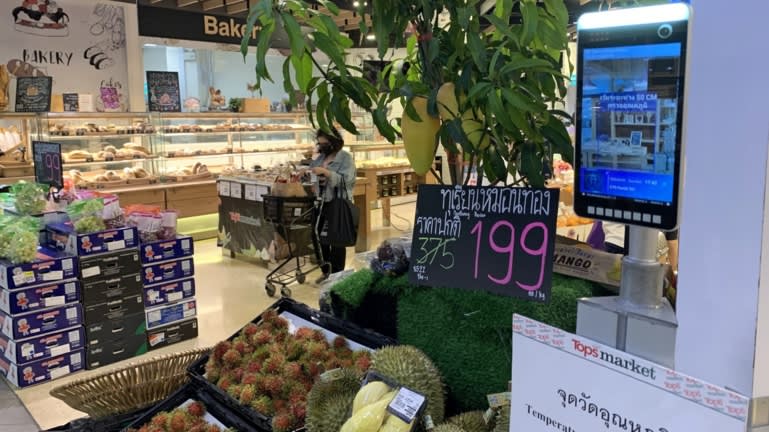 The Central Group also installed another type of robot that uses ultraviolet light to sterilize areas in some of its stores.

"We have introduced new technology to ensure the safety of our employees and our customers," Central said.

Competition is also rising among companies to develop robots to support medical facilities. In March, AIS teamed up with Chulalongkorn University, Thailand's best, to test a robot for use in hospitals. The robot can measure the temperature of patients and relay that message to medical staff in a different room. It also allows patients to communicate with medical staff through video calls. An automated machine used by Central Group to sterilize its shop floor.

AIS calls it the "first 5G robot in Thailand," as it relies on fifth-generation networks to transmit vast amounts of data quickly. It plans to introduce 23 units to 22 hospitals by early May. The machine can also be used to transport medicine and sanitizers, and to measure blood oxygen levels.

"I'm glad I could make a new normal for medical facilities in the future," said Wasit Wattanasap, head of the nationwide operations and support department at AIS, who was involved in developing the robot. He said that his team is now focusing on expanding the capabilities of the robot to respond to voice commands and to clean itself using ozone and ultraviolet light.

Engineering students at Chulalongkorn University have also developed their own robots -- "Pinto," or lunchbox, which transports food and medicine; "Nong Grajok,"  which is used for communication between doctors and patients; and "Ninja," which sends patients' medical data, like blood pressure and temperature, to doctors elsewhere.

In April, the university's alumni donated 103 robots to hospitals. 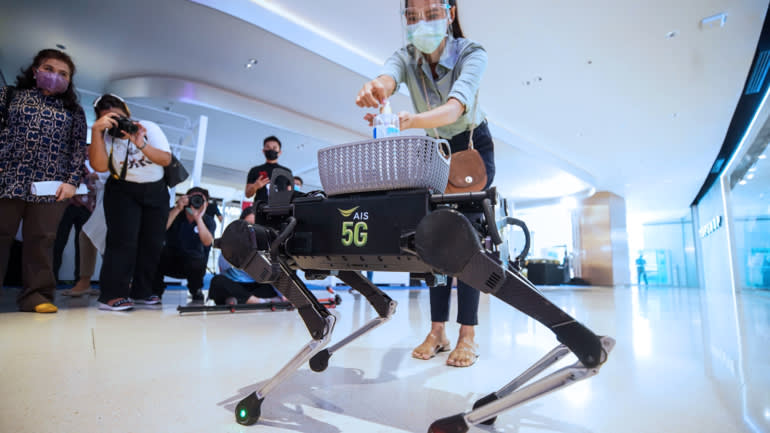 Industry experts said they hoped this trend to innovate will continue.

"Thai companies have not tried to make their own robots," said Chalermpon Punnotok, CEO of CT Asia Robotics, which has been developing automated machines since before the coronavirus epidemic. "In Thailand, the talented students choose jobs at well-known foreign companies or conglomerates. Not many take the path of developing their own robots."

Until now, Thailand had been content to rely on foreign companies for high-tech innovations but the coronavirus outbreak might have changed that mindset.