FPT was established in 1988 by Vietnam's National Institute of Technology Research to develop food processing technology. The company has since expanded into information technology and telecommunications, becoming a provider of internet and TV services as well as tech-based corporate solutions. It was listed in 2006 and now has 46 offices overseas, including Japan, Europe and the U.S.

Japan is its largest foreign base for development and sales, hosting about 1,500 engineers, most of whom are Vietnamese.

The company is expecting data demand to increase as foreign direct investment sparks economic growth. And as government policy on cyber security and 5G drives demand, bigger and better data centers could support Vietnam's this growth.

"We believe this data center will help [domestic] data stay in Vietnam, instead of being stored overseas," said Hoang Nam Tien, chairman of FPT Telecom, a key unit of the group, at a groundbreaking ceremony on May 4.

Hanoi officially imposed social distancing measures on April 1. The government lifted the restrictions on April 23, sooner than other Southeast Asian countries. Vietnam has had a low official coronavirus case count. As of May 25, it had reported just 325 confirmed cases and no deaths. The government is keen to turn the page on the outbreak and move forward with growth plans. "We must put our heads together to restart Vietnam's economy to reach the target of over 5% gross domestic product growth in 2020," said Prime Minister Nguyen Xuan Phuc at an online business conference on May 9.

Information technology companies are among the relatively few that have benefited from the restrictions on activity. FPT's revenue rose 17% and pretax profit climbed 18.9% year on year in the first quarter of 2020. The technology sector accounted for 54% of revenue and telecom 40%, showing growth in both sectors. An increase in subscribers for its on-demand TV service, FPT Play, was one of the growth engines.

Binh predicted IT will continue to grow in Vietnam. Most companies recognize the need to adapt to the changing environment.

"COVID left people, companies and nations with no choice but to move online as millions of people were infected," Binh said. "The world that COVID has birthed is creating a 'new normal.'"

Robust foreign direct investment in Vietnam is another factor driving demand for data. Vietnam's FDI in 2019 totaled $38 billion, up 7.2% from the previous year. The U.S.-China trade war, labor shortages and higher wage costs in China have spurred foreign companies to move factories elsewhere. Vietnam has been a popular destination because of its deep labor pool and investment-friendly environment. 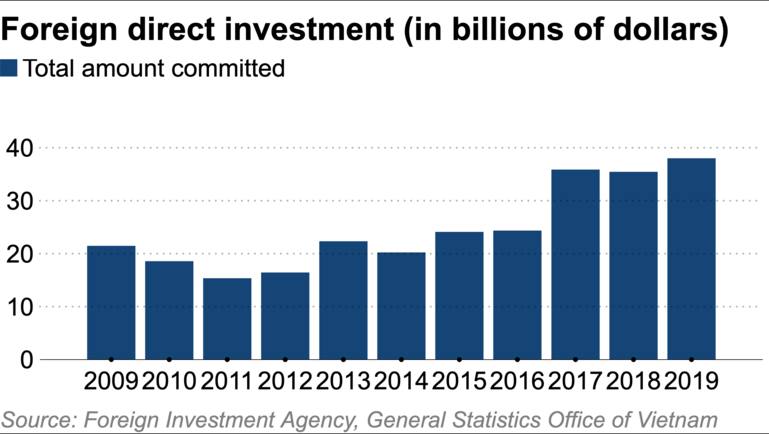 Hanoi's policy on data protection is another plus for data centers. Companies in Vietnam have tended to rely on U.S. and Chinese operators for data storage, including Amazon, Microsoft, Google and Alibaba Group Holding. But with a cybersecurity law having come into force in January 2019, businesses in the country are now required to store data at home.

The government also plans to commercialize 5G services in the second half of the year -- a move expected to generate huge demand for data storage. Binh told Nikkei that FPT needs to build "large data centers with high standards, and ensure system and data security to enable it to compete with big [foreign] companies."

Competitors of FPT include Viettel Group, which claims to be the largest data center operator in the country and has strong links to the military, state-owned Vietnam Posts and Telecommunications Group, and CMC Group.