PALO ALTO, U.S. -- A Chinese software engineer went to a Mexican beach resort in March on what he called a "workcation" -- and is still there with no work, nowhere to go and no vacation mood.

The 27-year-old, who asked to be identified only by his surname, Chen, had traveled to Cancun to have a holiday while renewing his H-1B visa for the U.S. The vital document, which must be renewed abroad, allows Chen and hundreds of thousands of other foreign citizens to work in the country for three-year periods -- as long as they have a company to give them a job.

"I did not want to travel because of COVID-19, but I also can't overstay my legal status after my visa expires, so I was basically forced to take the workcation," said Chen, who came to the U.S. from Jiangsu five years ago and worked at a San Francisco financial technology startup.

But before Chen made it to his consulate interview in Mexico, the U.S. slammed down the shutters, postponing visa appointments worldwide indefinitely as the pandemic worsened. Then, a week later, Chen was told by his company's human resources staff that he and a dozen others on his team had been laid off -- leaving him in limbo.

"This all happened too fast, and I have to abandon everything I've built in the past five years within days. ... I still need to pay my rent in San Francisco, since the lease won't be up till September, while also paying for the hotel in Mexico," he said.

"I'm now stuck in Mexico without a valid U.S. visa, a job or a plane ticket to China, but a broke bank account," Chen said.

His plight highlights the precarious situation facing many holders of such H-1B visas, most of them from Asia. As the companies where they work downsize in response to the coronavirus-induced economic downturn, these immigrants fear being among the employees most likely to be let go. But losing a job also puts their legal status in the U.S. in jeopardy. Unless they can find a new employer to sponsor the visa within 60 days, they must leave the country or become in effect illegal immigrants with little chance of ever regaining legal residency rights. 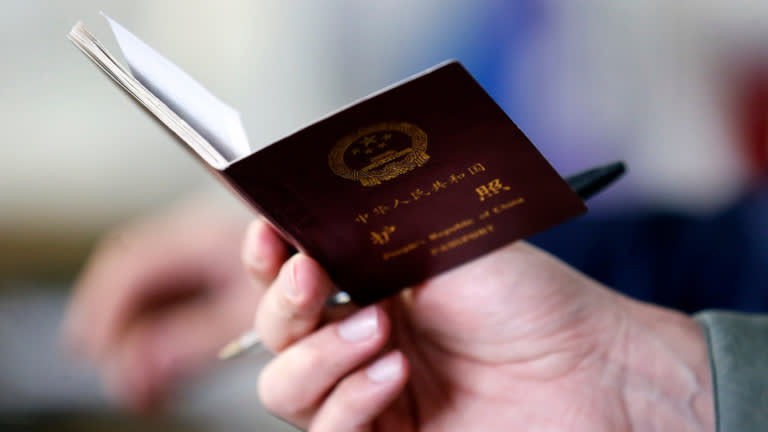 Finding a new employer willing to sponsor a work visa within 60 days is an uphill climb for Asian professionals in the U.S.    © Reuters

More than 250,000 immigrant workers might have to leave by the end of June, according to a research report by the Niskanen Center, a Washington, D.C.-based think tank.

"Finding a new employer that is willing to sponsor the work visa within 60 days is a difficult process even out of the economic recession and lockdowns," said Jeremy Neufeld, an immigration policy analyst at the center. "It's essentially impossible to do so under the current situation."

Some might have children who are U.S. citizens, or family members from different countries. "They're going to have to make decisions about family separation," Neufeld said.

And going back home is not always an option. India, for example, has closed its borders to all, including its own nationals, to curb the virus.

The situation underlines how dependent the American tech sector has become on the issuance of H-1B visas to maintain a steady flow of skilled workers, particularly from Asia. Data from U.S. Citizenship and Immigration Services shows that among the 388,403 approved H-1B visa applications in the year to September 2019, 72% were from India, 13% from China, and about 1% from South Korea. Around two-thirds of the applicants held a computer-related position.

More than a dozen organizations, including technology lobbying groups and think tanks, have called on the Trump administration to automatically extend expiration dates and deadlines to renew immigrant worker statuses until at least Sept. 10. "Without action, these issues will lead to hundreds of thousands of unfilled jobs and have profound negative economic effects," they said in an April 17 letter to the Homeland Security and State departments.

But these demands clash with what was already an increasingly hard-line stance on immigration under President Donald Trump. The number of nonimmigrant visas issued fell to 8.7 million in fiscal 2019, a fourth consecutive decline from the 10.9 million of fiscal 2015.

U.S. tech sector has been particularly reliant on the issuance of H1-B visas to maintain a steady flow of skilled workers, particularly from Asia.   © Reuters

In April, Trump tweeted plans to temporarily ban all immigration to curb the coronavirus and protect American jobs. He then signed an order blocking most people currently outside the U.S. from receiving green cards for 60 days.

While the order does not impact the legal status of those already in the U.S., some think the administration may use the pandemic as an excuse to further limit foreign workers.

Foreign workers who had grown used to being highly coveted in the U.S. job market are now more fearful of job losses. Blind, an anonymous workplace social network, surveyed more than more than 10,000 people primarily working in tech and found that more than 80% of visa-dependent workers were concerned for their job security because of the coronavirus pandemic, compared with only 66% for those not needing an employment-based visa.

"Of course I'm more afraid of layoffs than my American colleagues. ... It took me a year to find a job that will sponsor a work visa, and then another two years to be lucky enough to get the H-1B lottery, and then I waited another year for the visa to be approved," said Alex Lu, an engineer at Uber. And it all "will be for nothing within 60 days if I'm out of a job."

Legal experts said foreign workers who require employers' help to secure visas might be the first to lose their jobs, since they cannot be legally furloughed or put on unpaid leave.

Others see a possible silver lining in the crisis for visa-dependent employees: Companies might be more reluctant to let them go after sinking so much time and money into hiring them in the first place.

"Companies might evaluate and decide to let go of more native employees instead of immigrant workers because if I furloughed my H-1B worker I'm going to lose them forever and getting them back is going to cost," said Neufeld of the Niskanen Center.

"When recovery can finally start after the outbreak, businesses and teams who relied on the talents of these individuals will be handicapped," he said.