Magnetic tape might blow away hard drives; rayon gets an update 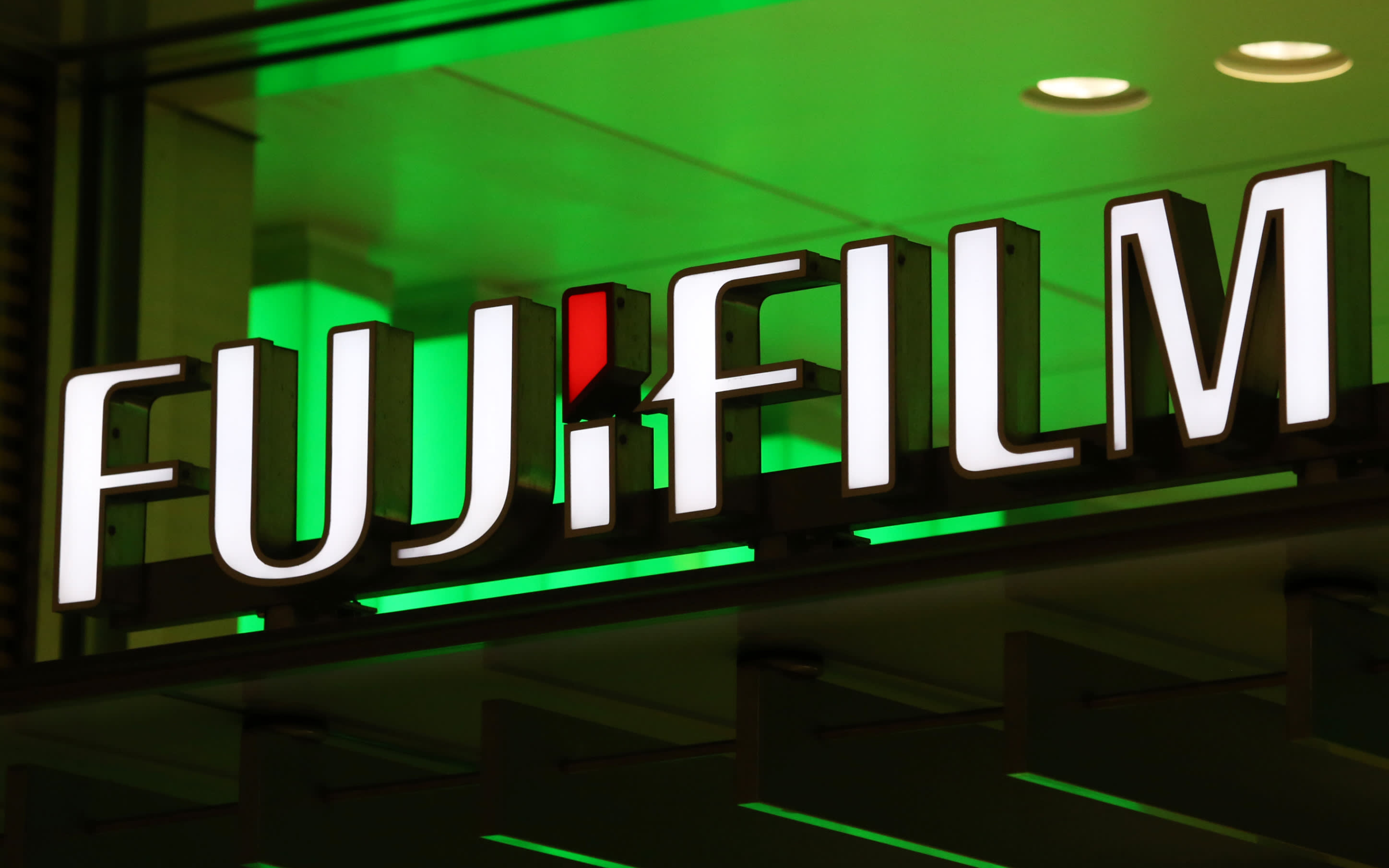 TOKYO -- Magnetic tape seems like a thing of the past. Until the early 2000s, almost every household in Japan had cassette and videotapes. Today, not even large electronics stores carry the things. Yet this outdated technology is suddenly drawing attention as a possible savior for today's bulging data problem.

Thanks to the internet of things, artificial intelligence and autonomous vehicles, mankind will create an estimated 44 zettabytes worth of data by 2020, almost 10 times what we had in 2013 (a zettabyte is a billion times a trillion; 10 to the power of 21). But only 14% of the data will be preserved because of a shortage of storage media, according to one estimate.

This is where magnetic tape comes in. It is once again being looked at as a storage medium because it does not degrade so much over time. In addition, its storage capacity has significantly increased. The latest product by Japan's Fujifilm, which controls about 60% of the global magnetic tape market, can hold 6 terabytes of data, a 140% increase from five years ago (a terabyte is a trillion bytes; 10 to the power of 12).

"The increase in area density [the amount of data per unit area] on low-speed HDDs has been slowing year by year," said Hitoshi Noguchi, general manager of Fujifilm's Recording Media Research Laboratories. "It is a matter of time" before magnetic tape eclipses hard disk drives "in terms of storing large amounts of data."

IBM, Oracle and other storage device makers have high hopes for Fujifilm's innovation. At the heart of the advance is an original magnetic material called barium ferrite, a special compound and a kind of iron oxide. The material is crystallized into particles, which are then uniformly and densely spread on resin film.

It is crucial that the particles are greatly reduced in size, uniformly spread and uniformly coated on tape. "Fujifilm is the only [company] that can handle barium ferrite at the nano level," Noguchi said.

The coating work requires great skill; it is akin to uniformly sprinkling a liter of water over four soccer fields. 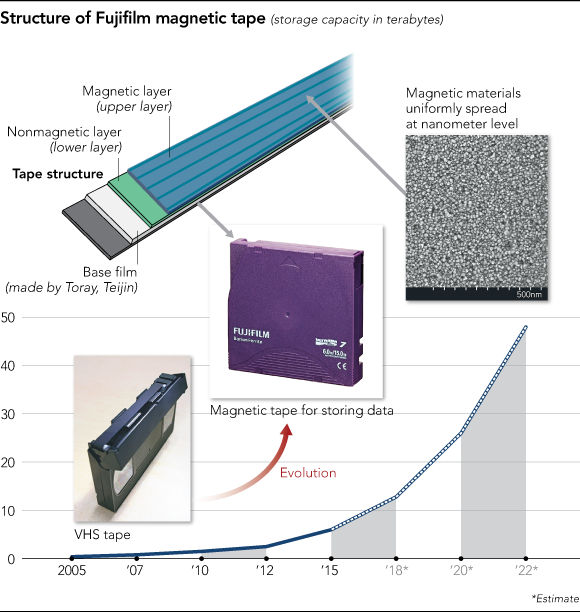 The company is also working to commercialize a new material that can store up to 400 terabytes of data, or 66 times more than is currently possible. It hopes to do so within a decade.

To increase storage capacity, base films must also be improved so that magnetic materials can be applied in higher density. Toray Industries, a Japanese chemical company, is now preparing to revive its production lines for polyethylene terephthalate, or PET, film, which is used to make magnetic tape. The company used to be the world's top supplier of PET film.

Toray has the technology to uniformly spread alumina particles on a film within 10 to 20 nanometers of one another (a nanometer is a billionth of a meter). This means a few billion particles are lined up in perfect rows in a 1-sq.-centimeter area. This allows for magnetic materials to be coated on the film.

Toray worked to develop a film that is both strong enough to withstand repeated winding and thin so as to increase the total length one reel can hold. The strength was achieved by stretching the film many times horizontally and vertically and adjusting the shape of the crystals, a Toray engineer said. With other new techniques, the company succeeded in reducing the thickness of the film to 5 micrometers, a third of that of VHS tape, while maintaining the strength.

"As the world becomes increasingly digitized, we turned what was in a fix with evaporating demand into a chance," a sales representative of Toray's recording materials said. "You never know how much market potential there is."

Another material -- one that is made into clothing -- is also on the comeback trail. After four decades, Japan's Oji Holdings three years ago revived dissolved pulp, used to make rayon. Mass production of rayon got underway again in 2014. Already, the material brings in over 10 billion yen ($90 million)  in sales a year.

Rayon is made from cellulose, a substance taken from plants. Known for keeping the body warm and absorbing moisture, it had been a popular clothing material. But what used to be referred to as artificial silk was soon eclipsed by synthetics. Oji stopped making the stuff in 1973, and the technology was forgotten.

Oji rediscovered dissolved pulp in 2009, a year after the global financial crisis. At the time, the global supply of cotton had been falling as farmers tried to feed the globe's ever-swelling population. But due to concerns for the environment and worries about allergies, consumers were also clamoring for natural materials.

"Rayon is the only material that can take the place of cotton and grow," Taketo Okutani, currently at Oji's Bioresource Development Center, thought then. Reviving rayon became a companywide project.

But it was not easy to remember the recipe. Engineers searched factories and dusted off information kept by a preceding company. They also interviewed former engineers. After five years -- and with a state-of-the-art twist -- they finally developed a way to mass produce the material.

At the center of Oji's vast Yonago plant in Tottori Prefecture, western Japan, stands a new 30-meter-tall tower. The dissolved pulp facility is a far cry from the rayon facilities of 40 years ago that had to be cleared of lestover pulp after each production cycle. It was a time-consuming process that did not lend itself well to mass production.

The new facility can continuously produce dissolved pulp from 96% or purer cellulose, unlike the old facility that could only make pulp with unstable cellulose concentrations. The new facility also bleaches the material, which allows for much more beautiful rayon than before.

Rayon is now used for the Heattech thermal clothing sold at Fast Retailing's Uniqlo stores. It is gaining attention elsewhere as well. As a result, a number of Chinese paper companies are getting into the market. Oji, which has other rivals, too, plans to fight back by speeding up efforts to develop ways to make cellulose nearly 100% pure.

The company also plans to find other high-value uses for dissolved pulp, such as in excipients -- substances used to hold the contents of a pill together or as food additives.