HONG KONG -- In the age of artificial intelligence, robots are becoming more empathetic to human feelings -- and in multiple languages, too. 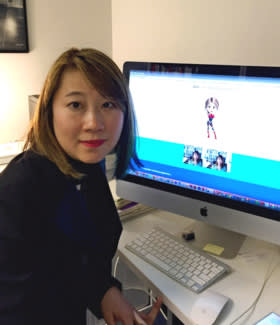 Professor Pascale Fung of the Hong Kong University of Science and Technology, pictured here, and her research team have developed an emotion-recognizing AI robot, Zara the Supergirl, seen on the computer screen.

To realize their dream of holding a natural conversation with a robot, a team of university researchers in Hong Kong have unveiled a new emotion-recognizing AI technology as part of scientific efforts to make human-robot interactions on a par with human-to-human communication.

Professor Pascale Fung and a team of computer engineering scientists at the Hong Kong University of Science and Technology have developed a cloud-based prototype machine, named "Zara the Supergirl," that can chat with people.

Zara, a cute female character on a computer screen, starts off a conversation by asking for information. "What is your earliest memory?" "Tell me about your mother." By analyzing images of users' appearances captured via a web camera, Zara can determine some of their personal attributes, such as gender and ethnicity, and choose one of two programmed languages, either Mandarin or English, to talk with them.

It takes about five minutes for Zara to grasp human personality traits, and based on them, she gradually deepens her understanding of a person through various conversations. Surprisingly, she can even crack some simple jokes.

Robotics technology is becoming very advanced, however, professor Fung said, "Every robot should have an individual personality in order to communicate better. It is not an ATM machine. In communication, empathy is very important to build a relationship based on trust."

Zara is capable of analyzing people's facial expressions and their tone of voice so that she can tailor her conversations to her users. In addition to Chinese and English, Fung and her team are looking to add French to Zara's repertoire of languages. A multilingual emotion-recognition AI robot is "very rare in the world," Fung said.

She unveiled her invention at the annual summer meeting of the World Economic Forum in Dalian, in northeastern China, in September last year. A number of offers for commercializing Zara have come in from businesses and investors, she said.

Zara is still in the cloud today, but Fung aims to "give her real physical body within two years." The professor is also looking to promote industry-university collaboration in the robotics field.

Humanoid robots, such as SoftBank Group's Pepper and Erica, a female android developed by Osaka University and other research institutions, have recently grabbed much media attention in Japan.

Given the projected growth in the humanoid robot market going forward, Fung and her research team are facing the need to establish a practical AI robot technology to set Zara apart from the rest of the pack. To that end, Fung said one of their goals is to create emotions-reading robots that can take care of elderly people and children.