The inside of a iPhone 12: The handset is packed with more parts to make it 5G capable.
NORIO MATSUMOTO and NAOKI WATANABE, Nikkei staff writersNovember 24, 2020 11:37 JST | Japan
CopyCopied

TOKYO -- South Korean suppliers are becoming more important to the manufacture of Apple iPhones. A teardown of the latest iPhone 12 Pro found that South Korean-made components account for a 26.8% share of the handset's value, up sharply over last year's model, and a larger share of the total than that of U.S.-made parts.

Apple's greater use of South Korean components was mainly driven by the Cupertino, California-based tech company's decision to adopt organic light-emitting diode display technology for its entire iPhone 12 range this year. The screens are supplied by South Korea's Samsung Display and LG Display.

Nikkei tore down the iPhone 12 and iPhone 12 Pro, released in October, in cooperation with Tokyo-based research specialist Fomalhaut Techno Solutions.

The cost of the high-end iPhone 12 Pro is $406, of which South Korean and U.S. components account for 26.8% and 21.9% by value, respectively, according to Fomalhaut. Compared with the iPhone 11, which featured an LCD display and went on sale last fall, the South Korean share jumped 9.1 percentage points, while the figure for U.S. parts dropped 3.9 points. 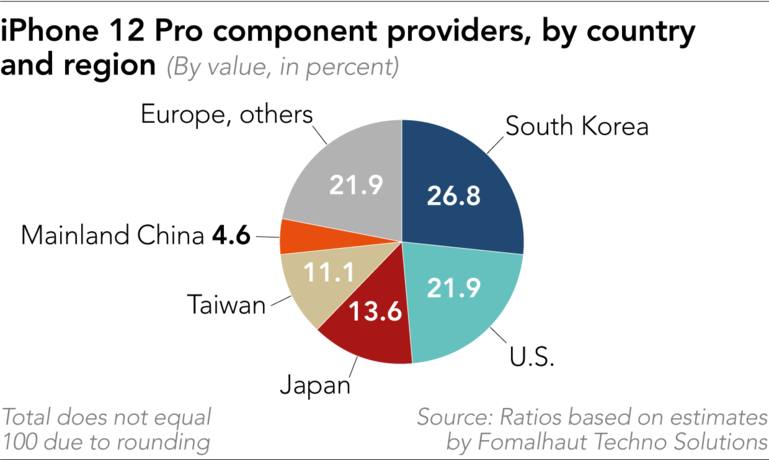 The findings underscore the importance of Asian parts suppliers to the iPhone. The value of Samsung Display's contribution rose especially sharply as Apple replaced LCD screens with OLED for the iPhone 12. South Korean suppliers, particularly Samsung, dominate in OLED technology.

Compared with the iPhone SE2, which went on the market this spring, the share of South Korean components jumped 22.4 percentage points, while the figure Japanese-made parts dropped 12.1 points. Apple used LCD screens, made by suppliers including Japan Display and other Japanese manufacturers, for that low-end model and earlier iterations of the iPhone.

Samsung supplies memory chips for the iPhone 12 as well.

Other than for screens, the contribution of high-tech Japanese companies remains sizable. Sony is the key supplier for the CMOS image sensors used in iPhone 12 Pro's three camera lenses, including its wide-angle and telephoto lenses, the findings showed. The sensors are priced at around $5.40 to $7.40 each.

Newer smartphones pack in many components for 5G compatibility, along with high-performance chips. For noise control and circuit protection, many passive components, including some as small as the tip of a ballpoint pen, are used. Demand for advanced Japanese technology remains strong for these parts. 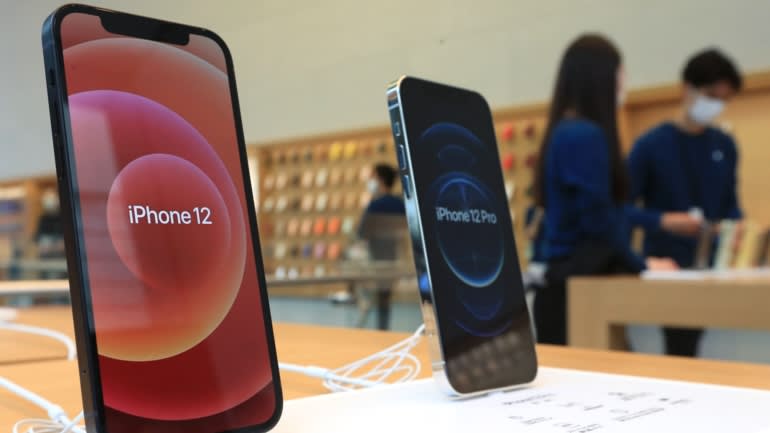 Apple continues to outsource most iPhone production to plants in China.  (Photo by Rie Ishii)

The iPhone 12 has adopted Murata Manufacturing's laminated ceramic condenser and Taiyo Yuden's power inductor. The phone is equipped with more than 1,600 passive parts observable on the circuit board.

Among other features, the iPhone 12 is designed to be small despite its 5G capability. It weighs 162 grams, 32 grams less than the iPhone 11, thanks to a smaller vibrating motor and battery. The motor is one-third smaller and more than 10 grams lighter.

The battery's capacity was cut by 10% to create space for additional parts. The battery cells are supplied by Amperex Technology Ltd. (ATL), a Hong Kong-based subsidiary of Japan's TDK.

Despite the smaller battery, the iPhone can play music and videos for as long as earlier models, according to Apple. That is thanks to advanced power-saving measures, such as the switch to 5 nanometer chips from 7 nanometer chips, analysts said.

Chinese-made components accounted for less than 5% of the total by value, amid concern about effect on the U.S.-China technology trade dispute on supplies.

But Apple continues to outsource most iPhone assembly to plants in China. The company will need to find other production sites if it wants to reduce its reliance on China.