From chips to charging, Asian suppliers provide an array of new technologies The iPhone 8's overall appearance. The back panel is made of reinforced glass and, unlike previous models, there is no white antenna running along the panel. (All following photos are those of the iPhone 8, unless otherwise noted.)
Minatake Kashio, Contributing writerOctober 22, 2017 12:00 JST | North America
CopyCopied

Both the iPhone 8, with its 4.7-inch display, and the 5.5-inch iPhone 8 Plus cut a sleeker figure than their last-generation counterparts, sporting a case covered front and back in reinforced glass that melts seamlessly into a smooth, rounded edge. The iPhone 8's stainless steel frame costs less than half the previous model's $40-or-so aluminum alloy frame, even with the cost of the glass included. The larger model uses the same frame as its predecessor. The far-right component shown on the screen is the newly introduced back cover, made of reinforced glass.

While the upcoming iPhone X will feature an organic light-emitting diode display, the iPhone 8 series retains the liquid crystal display used in previous incarnations. Sharp and Japan Display are thought to have supplied panels for the iPhone 8. LCDs remain easier and cheaper to produce than OLEDs, particularly in the size and quality required for smartphone screens, and they likely will remain the standard for some time.

The phones are the first Apple products to feature wireless charging, based on the Qi standard used in other mobile devices. This is thanks to the phones' glass back: A pane of metal would have blocked charging devices from communicating with the antenna directly behind the case. Only third-party charging pads are available for now, though Apple is reportedly developing one of its own. This effort could show how serious Apple is about pursuing wireless charging. Antenna for wireless charging. The antenna is covered in black sheet and located at the bottom of the device.

Battery capacity for both phones is around 7% less than that of their iPhone 7 series counterparts. But battery life will remain roughly the same, thanks to more efficient parts.

Under the hood, both iPhone 8 models contain an oscillator, or timing device, built around a microelectromechanical system. This is in addition to a crystal oscillator, which the iPhone 7 series phones contain. California-based SiTime, a unit of Japan's MegaChips, is the likely supplier. 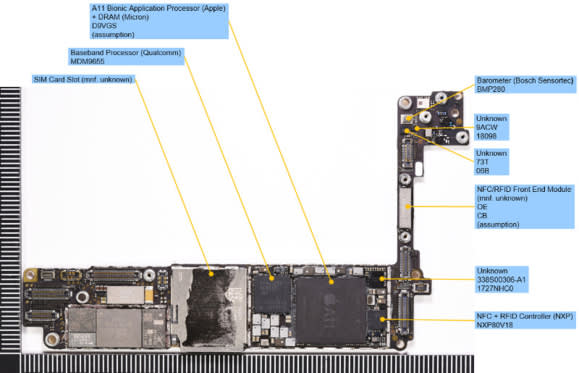 The display side of the main substrate. Located in the center of the substrate is a SIM card slot, one of the biggest parts. Generally speaking, the width of the iPhone's substrate is determined by the size of the SIM card.

MEMS timing devices are made from silicon, making them easier to mass-produce and shrink to fit into the iPhone's increasingly crowded innards.

Apple's proprietary A series processors have long led the way in terms of incorporating new technologies, and the iPhone 8 series' A11 are no exception. The chips, produced by Taiwan Semiconductor Manufacturing Co., are only the second of their kind to come from the advanced 10-nanometer FinFET fabrication process. South Korea's Samsung Electronics became the first chipmaker to adopt the FinFET process for smartphone processors and was several months ahead of Apple in putting this output into smartphones with Galaxy S series. The location of Apple's vibrating motor, or "Taptic Engine" (top left); its interior (top right), and appearance (bottom). Alps Electric is understood to be in charge of mass production of the iPhone 8 and the iPhone 8 Plus.

The iPhone 8 series incorporates the same vibrating touch feedback system -- the so-called taptic engine -- as its predecessors. Unlike a traditional vibrating motor, this module relies on a complex structure resembling a weight inside a box to produce a wide variety of sensations. This feature does not come cheap: One unit of Apple's technology costs roughly 20 times what a simpler motor would.

Japan's Nidec has led production of these parts for previous iPhones, with China's AAC Technologies Holdings serving as an alternative supplier. Another Japanese company, Alps Electric, apparently joined the group this time. Alps, Mitsumi Electric -- part of Minebea Mitsumi -- and others are also thought to be supplying camera parts such as autofocus devices and optical image stabilizers, while Sony continues to supply the key complementary metal-oxide semiconductor (CMOS) image sensors.

Flash memory chips in the 64-gigabyte phones examined for this article were produced by Toshiba. Minatake Kashio is the Director of Fomalhaut Techno Solutions K.K. and an independent consultant and analyst on mobile communication equipment. Kashio is the inventor of a location based information delivery system and has worked for an affiliate office of the Canadian federal government, responsible for semiconductor, intellectual property, aerospace, and risk management.

Originally published by Nikkei Technology Online on October 10 and 11.