HONG KONG/BEIJING/SHANGHAI -- The three big Chinese state-owned telecom companies that delisted in New York this year are turning homeward to raise capital and expand their business as tensions with the U.S. and Beijing's regulatory clampdown hit the brakes on global expansion.

Two of the three, China Mobile and China Telecom, are set to list in Shanghai soon. The third, China Unicom, already has a subsidiary listed in Shanghai.

"Our A-share listing, besides raising new funds, provides a good opportunity for our numerous users to participate in our growth," Yang Jie, chairman of China Mobile, told reporters during an online earnings news briefing on Thursday.

China Mobile listed its shares in Hong Kong and New York in October 1997. Over the ensuing quarter of a century, it has grown into the largest telecommunications operator in the world by subscribers, but domestic Chinese investors have limited access to the company as investors. Opportunities to invest beyond mainland markets are restricted to a few regulator-sanctioned arrangements, including special investment quotas or formal trading channels with the Hong Kong Stock Exchange.

"If we are able to list in the A-share market, this will allow capital and mobile user markets to completely coincide and share in the company's growth," said Yang.

The Chinese government has certainly played a role in setting the stage for this. As China Mobile is a so-called red chip company, a state-owned enterprise that is incorporated outside the mainland with a primary listing in Hong Kong, the company had a different set of regulatory hurdles to overcome before making its way to the Shanghai exchange.

"There was a series of policies being unveiled and implemented to allow red chips to list in the domestic A-share market, providing a favorable environment for us," Yang said. He did not touch upon the fact that the company was officially delisted from New York in May, but he said, "We recognized that the overall timing and opportunity was good."

Unlike most companies, which list mainly to raise funds, China Mobile already sits on a big pile of money. Its total cash and bank deposits added up to 374.1 billion yuan ($57.73 billion) as of the end of June.

The company's shareholders approved in June a plan to issue up to 964.81 million shares, or 4.5% of the expanded shareholder base in Shanghai. The share price has not yet been determined, but by based on Thursday's Hong Kong closing price of 50.30 Hong Kong dollars, the value of the listing would be roughly HK$48.5 billion ($6.24 billion). If the overallotment option is fully exercised with 144.7 million additional shares issued, the company could raise close to $7.2 billion. 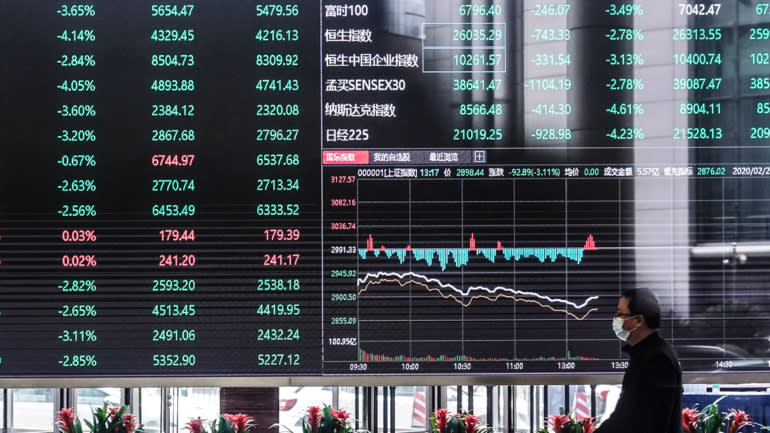 The Shanghai Stock Exchange will soon see the listings of China Mobile and China Telecom.    © Reuters

Given that the pricing mechanism in mainland China is structurally different from Hong Kong, the eventual issue size could vary, but China Mobile's listing could be close to its rival China Telecom's planned Shanghai listing where its pricing was announced last Friday, which aims to raise up to 54.2 billion yuan ($8.4 billion).

Even though the timetable of its listing is not yet determined, Yang said, "if things move along smoothly, I would estimate the process to be completed during this year."

Not long after the listing news, China Telecom on Wednesday announced a full list of 20 prominent companies that subscribed to the newly issued shares as strategic partners.

Ke Ruiwen, chairman of China Telecom, told reporters at its online earnings briefing on Tuesday that the company is taking advantage of its A-share listing to "establish a new development pattern."

"This made clear that China Telecom is aiming for growth as a telecommunications infrastructure company by forming by an 'all-China' corporate alliance," said an executive at a foreign investment firm.

China Telecom has already received regulatory approval for its initial public offering and finished soliciting investors, and is now waiting for a listing date. It aims to raise up to 54.2 billion yuan, which would make this mainland China's fifth-largest offering. This offering and China Mobile's could together raise 100 billion yuan.

All three, including China Unicom, have primary listings in Hong Kong.

The trio of directly state-controlled enterprises have access to substantial amounts of personal data in their role as telecom infrastructure companies. Their removal from the New York Stock Exchange was confirmed May 6 in response to an executive order signed last year by then-President Donald Trump barring Americans from investing in Chinese companies seen as too close to the military.

But regulatory headwinds are now blowing in from China as well. The Chinese government said on July 6 it would strengthen oversight of domestic companies that list their shares overseas, citing the need to protect user data. This has pushed several IPO candidates to shelve plans for U.S. stock offerings, including health care data startup LinkDoc Technology.

In the U.S., meanwhile, China-based corporations face the risk of delisting if they do not allow American accounting authorities to review Chinese auditors' work under the Holding Foreign Companies Accountable Act enacted last year. Beijing worries such reviews could result in national secrets or personal data falling into U.S. hands.

The fact that two Chinese telecoms are poised for mainland listings only about three months after being booted off the U.S. stock market hints at the urgency of Beijing's efforts to encourage such U-turns, part of a strategy of building up China's financial sector.

But mainland Chinese stock markets impose strict restrictions on inflows of foreign investment, limiting their appeal for companies looking to tap wide sources of capital. Top Chinese search engine Baidu and Bilibili, both of whose shares trade on Nasdaq, chose Hong Kong instead of Shanghai or Shenzhen as their dual listing destination.