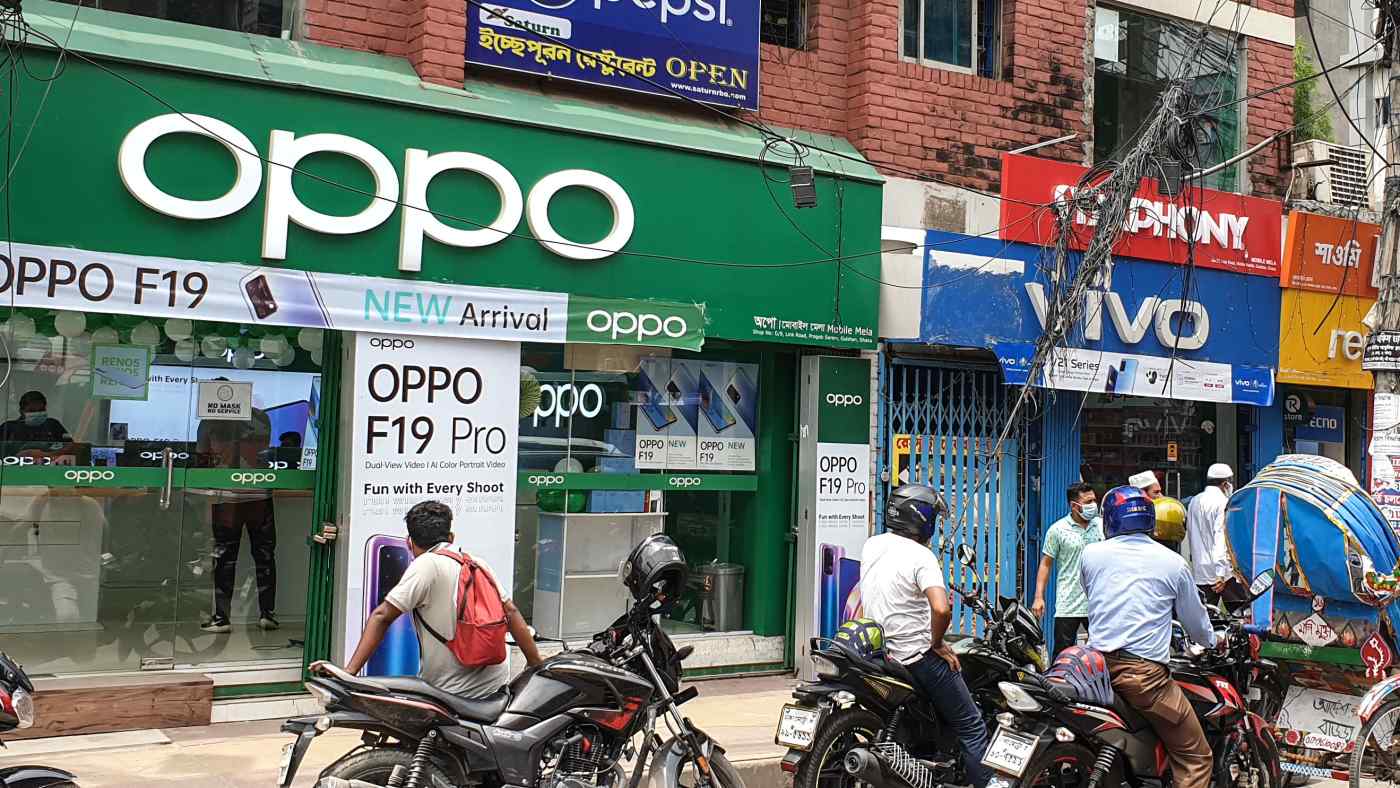 DHAKA -- International mobile phone brands Nokia, Samsung, Vivo and others are increasingly choosing to set up manufacturing ventures in Bangladesh to avoid the South Asian country's high import tariffs and get direct access to its large and growing population.

Bangladesh, once a perennial bottom-dweller in global league tables, has drawn increasing attention in recent years as its economy racks up high growth rates and consumer spending power in the country of 163 million people expands.

It has also taken steps to attract foreign investment and increase local production and consumption through its "Made in Bangladesh" program, nudging phone brands to enter the country by raising tariffs on imported handsets, collecting lower duties on component imports and exempting consumer purchases from the country's value-added tax.

Finland's Nokia is just the latest manufacturer to make the move, following on the heels of South Korea's Samsung as well as China's Oppo, Vivo, Transsion and Realme to adopt a strategy previously reserved for bigger markets like India and Brazil. Bangladeshi officials say other Chinese brands are expected to follow suit.

Thanks to an effective price gap of 15-26% between imported and locally assembled smartphones, domestic production has climbed, now accounting for nearly 80% of sales.

Noting the new predominance of local phones, Finance Minister A.H.M. Mustafa Kamal this month proposed extending the VAT exemption another two years. Another measure, set to come into effect on July 1, will block buyers of smuggled phones from registering their devices on local networks.

"That will shut [down the] illegal import of handsets into Bangladesh, and local manufactures will get encouraged, as their market shares will go up," Shahidul Alam, director general of the Bangladesh Telecommunication Regulatory Commission, told Nikkei Asia. Bangladesh's economy has been growing at a rapid pace in recent years.   © AP

Local manufacturing of phones only began in October 2017 when local electronics maker Walton started production under its own brand in a Dhaka suburb. It has since made 1.7 million smartphones and 4.3 million older-style feature phones.

A number of other companies now making smartphones in Bangladesh are local ventures, often arms of large conglomerates. But Vivo and Realme, both under the umbrella of China's BBK Electronics, and compatriot Transsion have set up their own factories in the country.

Tanzib Ahamed, brand manager at Vivo Bangladesh, said it had won "sizable" market share since launching its local plant in 2019 by making "global technology much more affordable for local consumers."

Citing data from research company Canalys, a local spokesman for Realme said his company is now one of Bangladesh's top three smartphone brands, with a 14% share.

"It is now possible to offer our products at a much more competitive price to the smartphone users," he said, adding that the company's factory in the city of Gazipur now has 600 employees. "We are registering phenomenal growth in Bangladesh."

Rezwanul Hoque, chief executive of Transsion's local unit, said he expects to be able to price phones even lower in the future as local factories start production of motherboards, batteries, chargers and other components.

"We are now using 'Made in Bangladesh' handsets. We are proud of it," said Atiqur Rahman, a private banker, who added that smartphone prices should go down further so that those with lower incomes also can buy high quality handsets.

The rush to produce phones in Bangladesh comes as its economy has been growing steadily. Before the pandemic, gross domestic product grew by over 7% annually for several years, and in the fiscal year ended June 30, 2020, GDP expanded 5.2%, according to the finance minister. Though lower than before, it was the strongest in Asia, he said. Bangladeshis seen outside the Bashundhara City Shopping Complex in Dhaka on Oct. 2, 2020. Producing smartphones in the country makes them more affordable to consumers.   © EPA/Jiji

The country has $45 billion in foreign exchange reserves, enough to cover six months of imports, and last fiscal year received over $21 billion in remittances from citizens working abroad, a figure the finance minister expects to reach $25 billion by the end of June. The country has also racked up merchandise exports of nearly $40 billion a year.

Bangladesh's 175.27 million active mobile phone accounts at the end of May -- well within the top 10 in Asia in size -- means the country is a key attraction for brands, according to the Bangladesh Telecommunication Regulatory Commission.

"Nokia is a very old and trusted brand compared to Chinese makers," he said. "None will be able to match ... Nokia's brand acceptance."

Takayuki Omino, spokesman for HMD Global, said, "Consumers will be able to buy their [be]loved brand Nokia handsets at an affordable price."

An official at the Ministry of Posts, Telecommunications and Information Technology said Xiaomi and Motorola, which is now part of China's Lenovo, are also working on plans for local production. However, Lenovo spokeswoman Genevieve Hilton denied that, while Xiaomi did not respond to queries.

Beyond the domestic market, the country's phone makers are starting to consider exporting. Walton has begun assembling phones for a foreign brand for export, with the first shipment dispatched to the U.S. in March, according to Uday Hakim, executive director at Walton Hi-Tech Industries. Walton also exported handsets under its own brand to Nepal, he said, though shipments are now suspended due to the pandemic.

Fair Group, the local conglomerate that assembles Samsung phones, also has its eye on foreign markets.

"We are expecting to start handset exports from Bangladesh by 2023 or 2024," said Chief Marketing Officer Mohammed Mesbah Uddin.

"Almost all the global brands either have received permission or [are] under process to set up factories here," he said, estimating that once that happens, 95% of smartphones for the domestic market will be produced locally.

Edison Group, another local conglomerate, makes phones under its own Symphony brand.

"We aim to turn Bangladesh into a regional hub for mobile handset production," Managing Director Jakaria Shahid told Nikkei, forecasting that exports by the industry will start to take off next year.