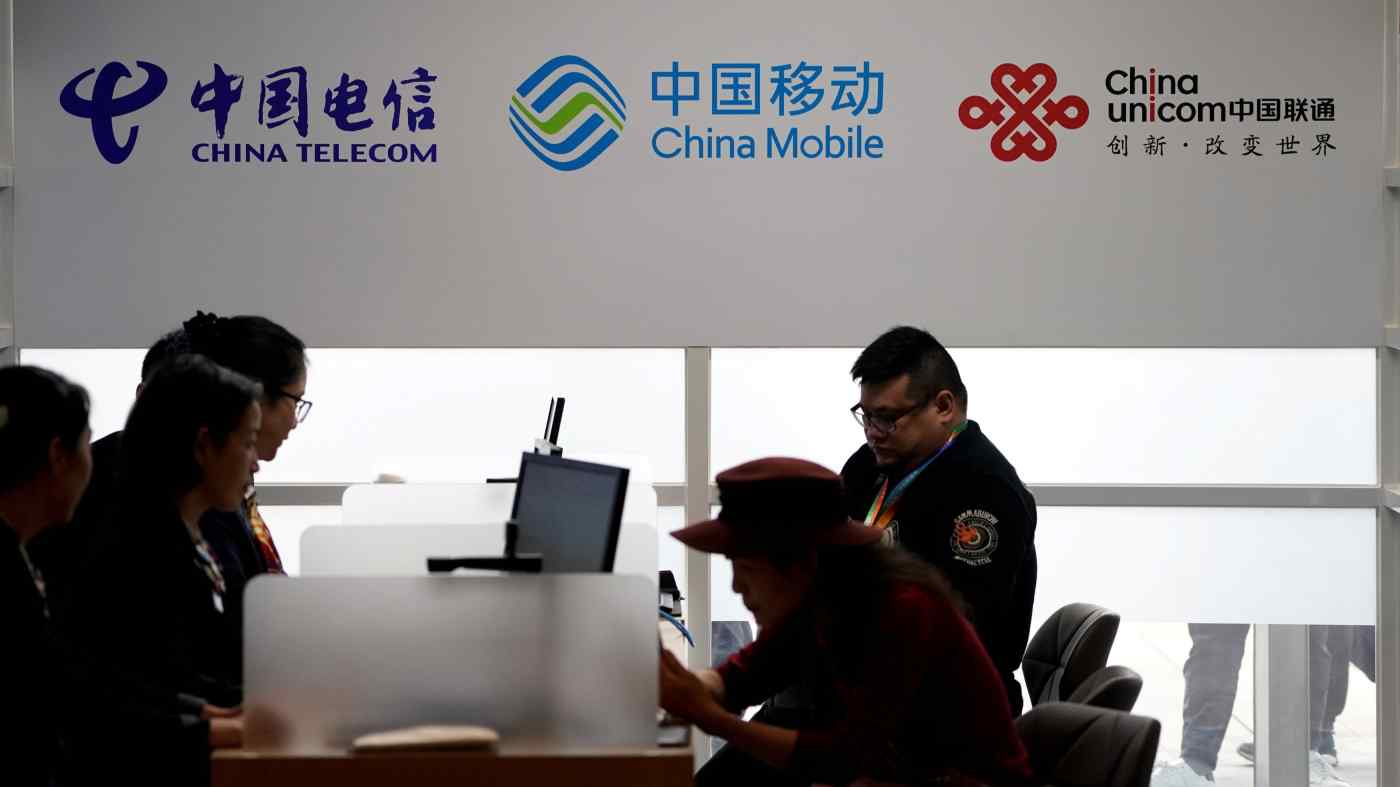 Shares of China Mobile and China Telecom fell in Hong Kong on Monday, while China Unicom eked out a gain. The companies' ADRs will be suspended from trading in New York on Jan. 7.   © Reuters
NARAYANAN SOMASUNDARAM, Nikkei Asia chief banking and financial correspondentJanuary 4, 2021 15:52 JSTUpdated on January 4, 2021 19:09 JST | China
CopyCopied

HONG KONG -- Shares in China's state-owned telecommunications companies fluctuated over sell-off concerns in volatile trading in Hong Kong on Monday, after they were earmarked for delisting on the New York Stock Exchange.

Investors also shunned other potential victims of a U.S. executive order that sanctions companies purportedly controlled by the Chinese military.

China Mobile, the country's largest telecom company, saw its stock price fall as much as 4.5% on the first trading day of the new year to its lowest level since 2006. It climbed back later in the day to close 0.8% lower.

China Telecom dropped as much as 5.6% before ending 2.8% lower, while China Unicom Hong Kong dropped as much as 3.8% but closed 0.5% higher. The largest Chinese oil companies, including CNOOC, also declined on fears that they could be booted out from American exchanges.

The three companies' American depositary receipts will be suspended from trading on Jan. 7, and the process of delisting them has started, NYSE said in a statement late last week. The three telecom companies said in separate statements that while they had not received delisting notifications from the exchange, the move could affect the prices and trading volume of their shares. Trading volume of China Mobile, China Telecom and China Unicom in New York is a fraction of their respective turnover on the Hong Kong Stock Exchange. (Photo by Dean Napolitano)

"The liquidity, trading volume and fundraising functions of the ADRs have been relatively low, therefore the direct impact of a potential delisting would be rather limited on the companies' growth and general market performance," the China Securities Regulatory Commission said on its website on Sunday.

The move "completely disregards the actual situation of the relevant companies and the legitimate rights and interests of global investors and severely undermines normal market rules and order," it said.

Calling the move politically motivated, the commission said the ADRs of the three companies amounted to a total market value of less than 20 billion yuan ($3.06 billion), or a combined 2.2% of their total equity.

Although the delisting is a "slight shock, the key remains whether the three listed telcos will be subject to the U.S. investment ban," Jefferies analysts led by Edison Lee in Hong Kong said in a report. "We can only wait for the Department of Treasury's publication of the final list to be sure."

The move by NYSE is the latest salvo in the worsening relationship between the world's two largest economies. However, it is at best symbolic as trading volume of the three telecom companies in New York is a fraction of their respective turnover on the Hong Kong Stock Exchange. Investors' focus now rests on whether the companies will face a U.S. investment ban, which bars American investments in Chinese companies identified to be owned or controlled by the military.

The impact from the delisting could be limited as shares in the three companies have already dropped by between 21% and 28% since President Donald Trump's executive order on Nov. 12 that identified 35 Chinese companies to be owned or controlled by China's military, analysts said.

Analysts said that while U.S. investors now have the option to swap their ADR holdings in the companies for the Hong Kong-listed shares, they would be forced to exit completely if the Treasury Department's investment ban list includes them. Such a move would pressure the Hong Kong-listed stocks, they said.

"Amid increased uncertainty, investors may view these stocks as lacking defensibility and, hence, might become reluctant to hold the stocks," Citigroup analyst Michelle Fang in Hong Kong said in a report. "Potential removal from indexes, such as MSCI and FTSE, could also cause large selling of the Hong Kong-listed shares from global passive and indexed funds."

Still, Fang said that "non-U. S. investors may view this as an opportunity to buy given current cheap valuations and the telcos' improving fundamentals." The three companies are trading at between 7.5 times and 9.4 times 2021 earnings compared with 15.1 times for the MSCI China Index and 14 times for Asia-Pacific peers, she wrote.

The three companies were not included in the initial list of Chinese companies to be excluded in indexes compiled by MSCI and FTSE Russell. The latter on Monday is expected to announce possible changes in its indexes.

China's Ministry of Commerce said on Saturday said that the country will protect the rights of Chinese companies and hoped the two sides could work together to create a stable business environment.

Analysts said other Chinese oil companies could be next in line for delisting as they are crucial to the Chinese military. The U.S. Department of Defense has already included CNOOC's parent, China National Offshore Oil Corp., as a Chinese military company.

CNOOC dropped as much as 5.7% in Hong Kong on Monday but pared losses to end down 1.8%. PetroChina, which fell as much as 2.9%, recovered to close unchanged. China Petroleum & Chemical Corp., or Sinopec, closed 1.7% higher after being down 1.4% earlier.

The Hang Seng China Enterprises Index, which reflects the overall performance of mainland securities listed in Hong Kong, ended the day 0.1% lower after dipping as much as 0.8%. The benchmark Hang Seng Index rose 0.9% to close at 27,472.81 on Monday.