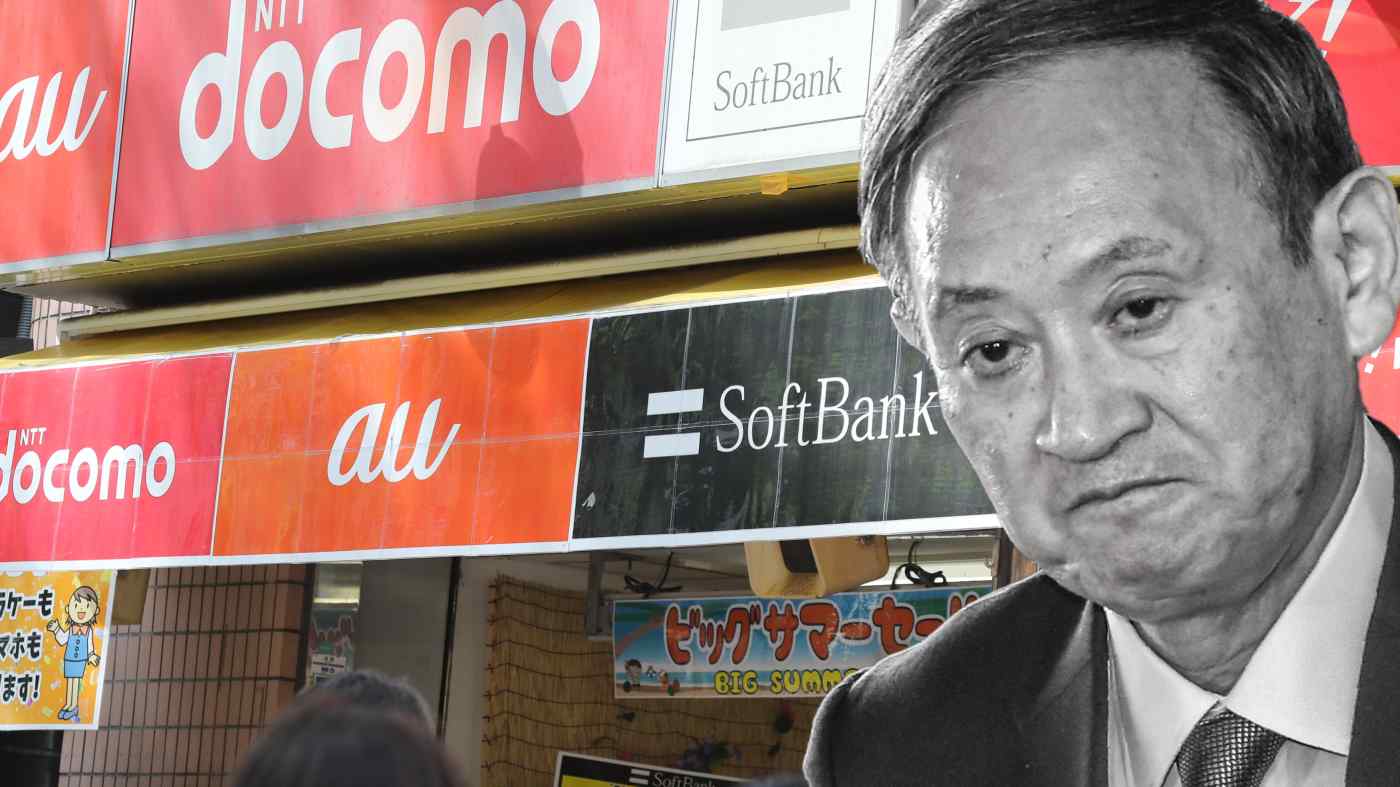 TOKYO -- It is Yoshihide Suga's turn to find out what other Asian leaders have already learned: it is one thing to want to please voters with lower telecoms charges, but quite another to make it happen.

Japan's biggest telecommunications companies have shrugged off pressure from the country's recently chosen prime minister to cut mobile phone tariffs, highlighting challenges he faces in implementing one of his key policies.

KDDI and SoftBank Corp, the second and third largest carriers by subscribers, recently introduced similar pricing plans for 20 gigabytes of data per month, widely seen as a response to Suga's policy. But the heads of both companies said the impact to profit will be minimal or nonexistent, and kept their full-year earnings forecasts unchanged.

"We don't expect a big decline in income," Ken Miyauchi, CEO of SoftBank Corp., said in a press conference on Wednesday. The company said operating profit for the April-September period rose 7% from a year earlier to 589 billion yen ($5.6 billion), and expected a 1% increase for the fiscal year ending in March 2021.

KDDI President Makoto Takahashi said last week that its new pricing plan had been "well-received from the minister for internal affairs and communications... we think [the new plan] meets international levels."

"There will be no impact" to its earnings for the fiscal year ending in March next year, he added. KDDI expects to log a 0.5% increase in operating profit from a year earlier.

KDDI's stock price, which has been trending downward since Suga's policy announcement raised uncertainty over its earnings outlook, on Monday rose to levels before he took office in mid-September. SoftBank's stock price is still below mid-September levels, but analysts said that was also due to a 1.2 trillion yen secondary share sale by its parent company, SoftBank Group, which was announced in August.

Attacks on telecom operators have been a popular political strategy across Asia. But implementing change has proved challenging. South Korean President Moon Jae-in pledged to cut telecom bills during his campaign in 2017 and his government pushed for this idea after taking the helm. But the populist policy failed as three mobile carriers -- SK Telecom, KT and LG Uplus -- that dominate the market strongly opposed the plan. Finally, the government and telecom companies compromised by cutting bills by 11,000 won ($9.67) for low-income families only.

In July, Philippine President Rodrigo Duterte threatened to close the country's two major telecom companies and seize their assets if they did not improve their services. Globe Telecom, one of the two, responded by calling on local governments to cut red tape that had hobbled its infrastructure buildup.

The confidence among Japan's telecoms executives in maintaining their profit levels suggest an uphill battle for Suga, who had been calling for lower mobile tariffs since he was minister for internal affairs and communications. After that, Suga became chief cabinet secretary under previous Prime Minister Shinzo Abe and claimed that prices in Japan were among the highest in the world. In 2018, he said operators could cut prices by about 40%.

"Regarding the reforms we have promised so far, such as the reduction of mobile phone charges, we would like to start immediately from what we can do, produce results, and have [consumers] feel the outcome," Suga said in his first policy speech in parliament in October.

Fears of political intervention will likely cap investor appetite for Japanese telecoms companies, which are some of the largest in Asia by market capitalization, analysts said.

"Japan's telecommunications industry has been considered a regulation-free market," said one analyst at a foreign brokerage. "The negative impact that Suga's policy has on foreign investors is extremely big."

KDDI and SoftBank may come under pressure in the coming months if top carrier NTT Docomo introduces a lower pricing plan. It has remained vague about its plan to do so but some analysts expect it to make aggressive moves after a new CEO takes the helm on Dec. 1.

The reshuffle is part of a restructuring of the group -- parent company Nippon Telegraph and Telephone, which was privatized in the 1980s but still partly owned by the government, plans to take Docomo private by buying shares it does not yet own.

"NTT is a giant... even we use NTT Group's optic fiber cables in our backbone network," he said. "It was originally a national asset. If fair competition is changed in a strange way... every business operator will oppose."

NTT on Friday said its operating profit for the April to September period rose 3% on the year to 1 trillion yen despite a 3% decline in sales. CEO Jun Sawada said the results were "strong," but the company kept its full year guidance unchanged due to uncertainty over the coronavirus pandemic.

NTT also said it will launch a new brand, Remote World, and roll out applications that meet new demand from companies seeking to go digital. The applications include digital employee ID cards and a service that converts paper invoices to a digital format.

Additional reporting by Kim Jaewon in Seoul and Cliff Venzon in Manila.