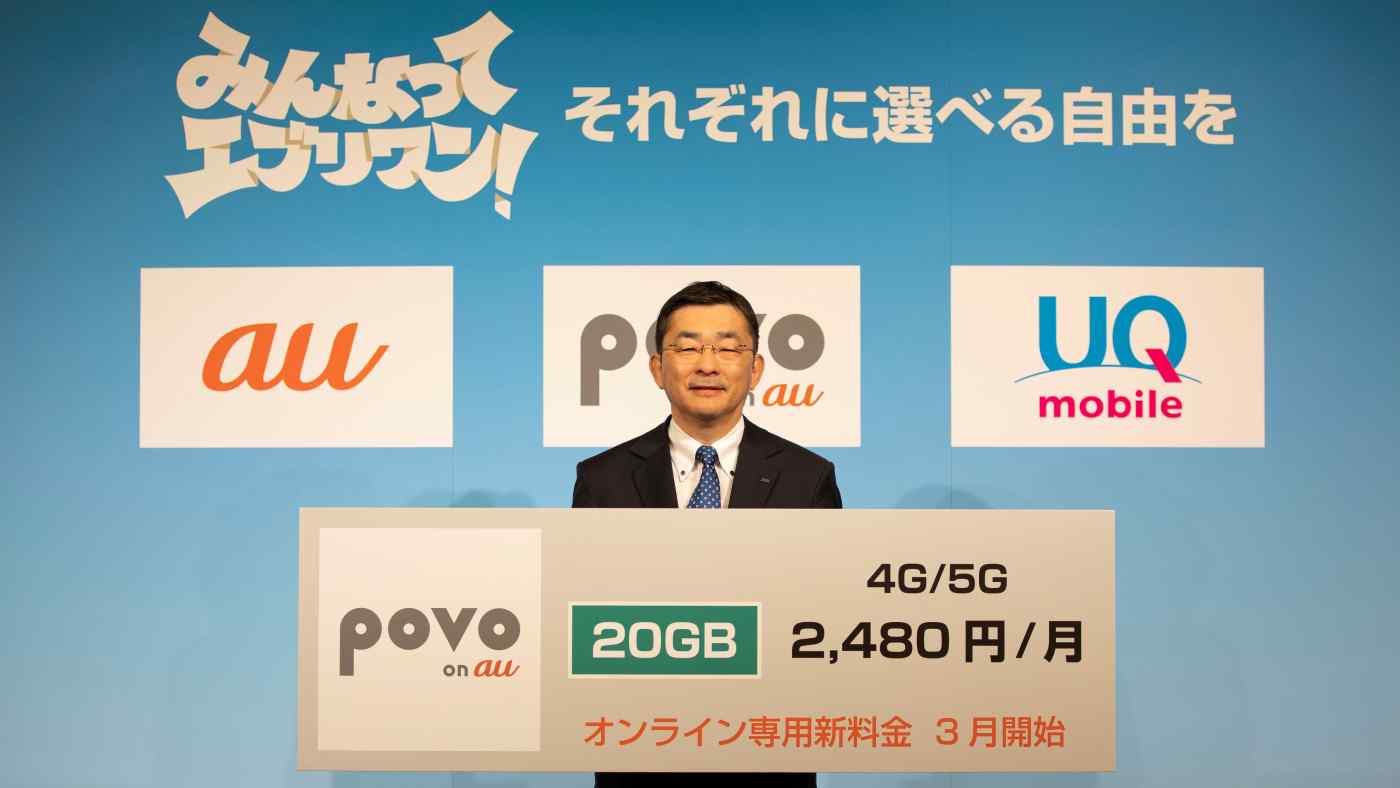 TOKYO -- Japan's three major telecoms -- NTT Docomo, KDDI and SoftBank -- are gearing up for a rate war in spring.

"We have a number of ways to provide the lowest rates," KDDI President Makoto Takahashi told a news conference on Jan. 13, as he revealed new service plans to cut fees for unlimited data usage by up to 20% from existing plans.

KDDI's spring rollout features flexible pricing, such as usage charges on a daily or weekly basis. The company will provide 24 hours of unlimited usage for 200 yen. It will also offer a monthly 20-gigabyte plan for 2,480 yen ($24), the lowest among major mobile carriers in Japan.

KDDI is looking to challenge rivals Docomo and SoftBank, both of which announced new services in December. But as the major telecoms mostly ignore reducing rates for less data usage, competition among them and new carriers like Rakuten Mobile is expected to continue.

The new plans are scheduled to start in March.

KDDI was once criticized for its complicated fee structure, prompting a company executive to remark that KDDI could not "afford to commit another mistake." To simplify billing, family discounts will be eliminated from its new service and certain other mobile plans, three of which will see a 500-yen rate cut while two will see monthly data usage limits increase by five gigabytes. Unused data volumes can be carried forward to the following month.

The company will also allow for unlimited monthly 5G and 4G data under its "au" brand for 6,580 yen. The new plan -- which offers rate cuts of about 10% to 20% -- will put KDDI on par with NTT Docomo and SoftBank.

These three carriers have been targeted by the government of Prime Minister Yoshihide Suga, which is calling for reduced mobile rates. All three have announced plans to cut rates for 20-gigabyte services after the government singled them for charging more than in other countries.

The typical smartphone user consumes about seven gigabytes per month, according to research company MM Research Institute. "To young people who stream video and use other services, the 20-gigabyte mark is attractive," said managing director Hideaki Yokota. "Heavy data consumption by this demographic will continue in the 5G age," he added, noting the importance of 20-gigabyte plans.

The top three mobile carriers will each charge 2,980 yen for their services, including unlimited free calls of less than 5 minutes monthly. But differences will remain. While one of Docomo's services will offer overseas roaming, SoftBank will provide unlimited messaging in a tie-up with messaging app Line. KDDI will offer an annual discount of 6,000 yen to users who converse via an app rather than use the phone.

"More than 60% of young people use [mobile devices] as telephones for less than 10 minutes a month," KDDI's Takahashi said, in the expectation that one of its new services will lure young users.

Given that the new services will not launch until March, it is too early to say how consumers will react before the spring shopping season begins. Docomo and SoftBank may follow KDDI and "offer 2,480-yen plans that will separate phone calls from other services," a telecom industry official said.

The next focus is on outlier Rakuten, operator of Japan's top e-commerce platform. How it responds to bigger rivals encroaching on its 2,980-yen rates for small data usage is unknown. But it could weaken its position, given the competition's aggressive new pricing and greater coverage.

The new plans announced by the three majors have been published on their websites. This will likely prompt users of smaller data usage services to call for fee reductions.