SINGAPORE -- Singtel is eyeing Indonesia, Thailand and the Philippines as destinations for the same 5G next-generation network technology it is now rolling out in its home market. The technology makes possible a host of new services that promise to transform a variety of industries as the telco extends its reach into foreign markets.

The Singapore Exchange-listed company on Monday showcased a range of potential uses the new mobile network can support, touting business applications through its multi-access edge computing infrastructure as a key peg that lifts 5G above the current 4G technology.

By market capitalization, Singtel is the largest telecom operator within the Association of Southeast Asian Nations' 10 member countries, and it plans to leverage its position to snag market share as the region switches to 5G.

The company is using its home base of Singapore as a showcase of how 5G, touted as being 10 times faster than current 4G networks, can be used by consumers and businesses alike in ways that can be replicated across ASEAN markets.

"If you look at enterprises who operate in the region, they will want to roll out a similar digital transformation, not just in Singapore but across the region as well, and having a common MEC platform makes a lot of sense," Yuen Kuan Moon, Singtel's Group chief executive officer, said on Monday.

The telco has partnered with Sweden's Ericsson to collaborate on the development and deployment of advanced 5G enterprise solutions in Singapore. Singtel's Monday showcase of 5G applications cited telemedicine, autonomous transport, smart factories, digital logistics, port control and security as well as robotics as industrial use cases for the low-latency network.

"There must be a base assumption that we need to continuously upgrade our network to keep pace with the technology changes that will apply to all mobile operators in the world, and definitely including all our associates in the region," Yuen said during the showcase to journalists, which was held virtually.

He said Singtel's foreign associates will keep pace and make sure to be ahead of the curve so as not to fall behind the rest of the markets in the region.

"We will have to make sure we lead the market to show what can be done with 5G and to compete beyond just price," Yuen said. "So that will continue to happen and what is unique (with 5G) and how do we bring it to the rest of the region," he said of his company's approach.

Singtel has stakes in other telecom operators in ASEAN, including Indonesia's Telkomsel, the Philippines' Globe Telecom and Thailand's Advanced Info Service.

Yuen said Singtel's associates' adoption of the MEC infrastructure demonstrated in Singapore will provide the base for a "seamless regional footprint" and regional network management to set the telco apart from other operators that only serve a single market.

While the ongoing COVID-19 pandemic has accelerated the penetration of digital services across the region, it has also closed borders as governments struggle to get control over the spread of new coronavirus cases. This has hurt Singtel's ability to draw revenue from mobile roaming services used by travelers. 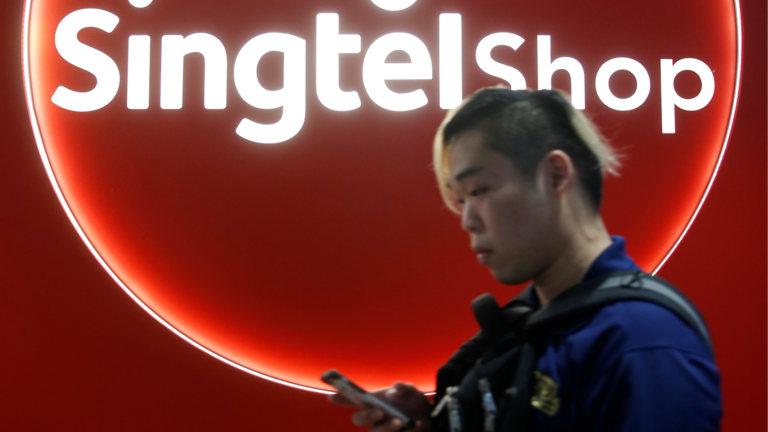 The company's business has come under increasing pressure to transform as it booked a net profit of 553.7 million Singapore dollars ($418 million) for the fiscal year ended in March, down 49% from the previous year.

Signs are afoot that things may be turning around for Singtel. The telco booked a net profit SG$445 million for the three months ended in June, reversing a net loss of SG$20 million a year back as the business environment improved.

In a reset of its strategy it announced in July, the operator named 5G and emerging technology investments as a key pillar to reinvigorate its core consumer and enterprise businesses as it develops new growth engines for digital services in the region and Singapore.

The city-state will be half-covered by 5G by telcos in the country by the end of next year, with coverage expected to be fully up and running by the end of 2025. Singtel, for its part, said it has managed to cover around two-thirds of Singapore for its customers currently.

While Singtel controls about half of the city-state's telecoms sector, it faces stiff competition in a mature market. It holds one of the two licenses to host the 5G network in Singapore, with local rivals StarHub and M1 jointly holding the other.

Sachin Mittal, analyst at DBS equity research tipped 5G expansion to drive the overall mobile services market revenue of Singapore at a compound annual growth rate of 7% from 2020 to 2025.

"The 5G subscriber share is expected to hover at 58% in 2025 from the 2% in 2020, surpassing 4G subscriptions," he wrote in a report released in August. "Singtel is expected to be the market leader over the forecast period and is well ahead in the 5G network rollout compared to StarHub."