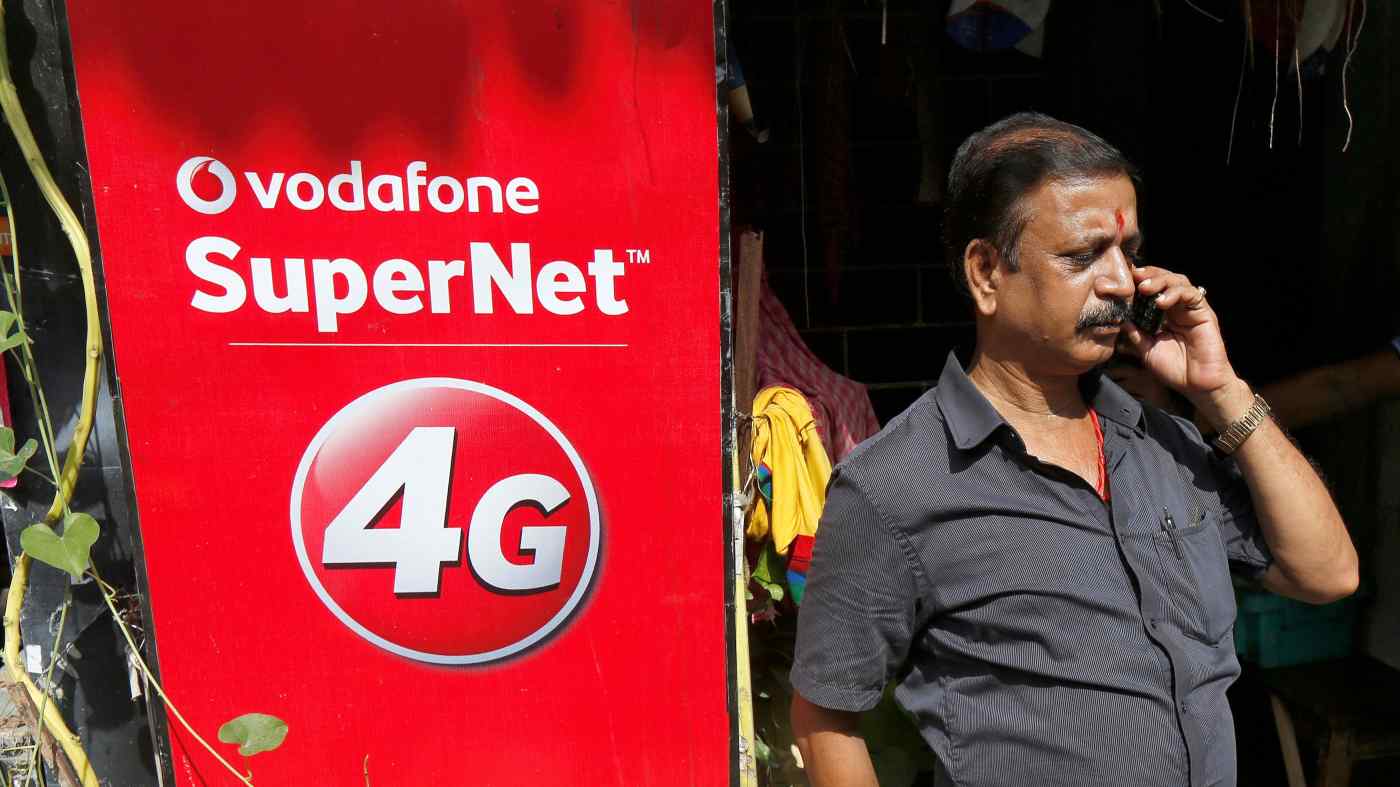 NEW DELHI -- Despite a cash injection from an owner to help its operations during the novel coronavirus pandemic, Vodafone Idea, one of three key telecom operators in India, still faces an existential threat.

U.K.-based Vodafone, which owns about 45% of the India joint venture with local conglomerate Aditya Birla Group, on Wednesday said it accelerated a payment of $200 million to Vodafone Idea so that it has sufficient liquidity to operate as business conditions deteriorate amid a nationwide lockdown.

The payment, originally due in September, was made "to support the approximately 300 million Indian citizens who are Vodafone Idea customers as well as the thousands of Vodafone Idea employees," the telecoms group said in a statement.

Vodafone Idea has been pushed into crisis by a Supreme Court ruling in October that ended a long-standing dispute between the government's telecoms department and main telecom operators over New Delhi's claims that the companies had underpaid license fees and spectrum charges.

In March, the Supreme Court reiterated its previous guidance, ordering the telecom operators to pay retrospective levies and penalties totaling tens of billions of dollars to the government. The court's tough stance means that Vodafone Idea is facing a bill of as high as 530 billion rupees ($7 billion).

"It is going to be really challenging for us to remain solvent," a senior Vodafone Idea official told the Nikkei Asian Review on condition of anonymity.

In March, concerned over the impact of the potential collapse of a major telecoms player on the industry and the wider economy, the Department of Telecommunications asked the court to extend the payment timeline to 20 years. Yet, Vodafone Idea appears to have given up on the plea, which is set to be decided soon.

"Even if the Supreme Court rules in favor of DoT, with an already stressed balance sheet, it is very tough to pay such a huge amount of liability within the given time frame," the official said.

Experts said Vodafone Idea was worse off than its rival Bharti Airtel, which is backed by Singapore Telecommunications. "The situation for Airtel is bad too but it will survive the tide," said Praveen Khanna, a telecom analyst. "Airtel's cash reserves for Indian operations will be impacted but that will not cause much significant deterioration in the overall credit quality of the company."

A comparison of the financial statements of the two companies for the year ended March 2019 shows the magnitude of Vodafone Idea's debt. At the end of the period, Vodafone Idea's net interest-bearing debt was 1,182 billion rupees, about 55 billion rupees more than that of Airtel's, according to QUICK-FactSet data. 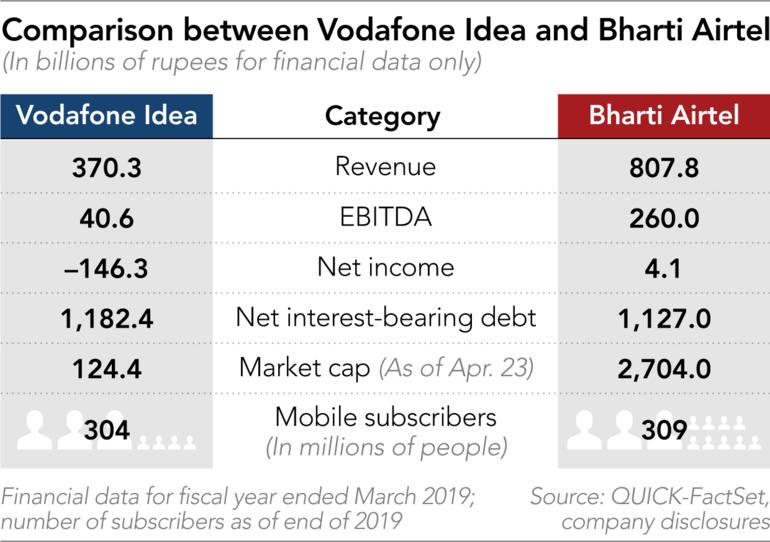 Furthermore, Airtel's success in raising $3 billion of additional capital in January through an issue of shares and overseas convertible bonds widened the financial gap between two companies.

London-listed Bharti unit Airtel Africa in its quarterly report said that previous concerns around the group's ability to continue "no longer exists" and that the company "has adequate committed and non-committed facilities to operate as a going concern."

Vodafone Idea's quarterly report, however, was a lot bleaker: "It is to be noted that material uncertainty exists that cast significant doubt on the company's ability to continue as a going concern and its ability to generate the cash flow that it needs to settle, or refinance its liabilities."

The company laid the blame on the Supreme Court ruling and said its survival depends on a "positive outcome" of negotiations with authorities for a moratorium and other relief measures.

Kumar Mangalam Birla, chairman of both Aditya Birla Group and Vodafone Idea, made an unequivocal statement at a business seminar in December. "If we won't get anything, then I think that's the end of the story for Vodafone Idea," he said. "It is true that we will shut shop if we won't get relief." 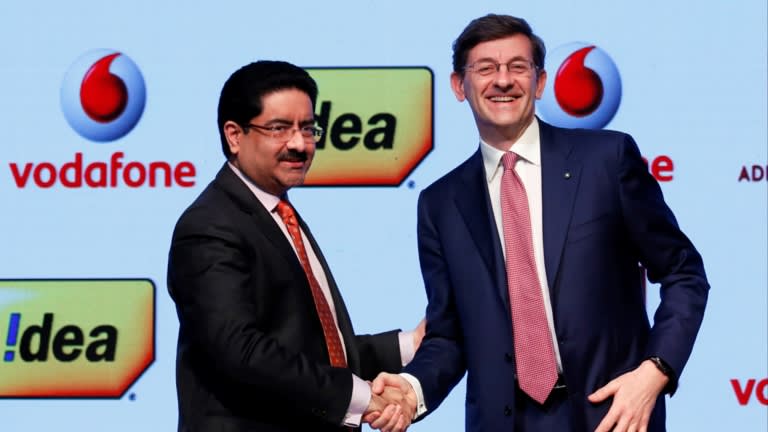 Aditya Birla Chairman Kumar Mangalam Birla, left, greets Vittorio Colao, then-CEO of Vodafone in 2017: Asked about the fate of Vodafone Idea in December, he said, "It is true that we will shut shop if we won't get relief."   © Reuters

Market observers are starting to talk about the withdrawal of Vodafone Idea from the Indian market as a real possibility.

Mumbai-based ICICI Securities in February suspended its rating on Vodafone Idea. "We believe that given Vodafone's weak balance sheet and promoters' earlier statement of their inability to infuse capital, the company is more likely to file for bankruptcy than meet the demand for the dues," it said.

On Thursday, Reliance Industries, an Indian conglomerate with businesses ranging from petrochemicals to telecommunications, announced that Facebook has invested $5.7 billion in a 9.99% stake in Jio Platforms, which operates India's largest telecom company, Reliance Jio.

The fresh capital will give Jio a war chest to face rivals, including Vodafone Idea.

If Vodafone Idea were to exit the country, that would leave the South Asian country's telecom market with only two meaningful players: Jio and Airtel, raising concerns that the market will become uncompetitive, to the disadvantage of consumers.

"[Vodafone Idea's exit] will be particularly harmful to the economy as it can potentially lead to market abuse and unfair pricing," said Kazim Rizvi, founder of The Dialogue, a Delhi-based policy think tank. "The benefits of market competition will be wiped out by the exit."

Mahesh Uppal, director at Com First, a telecoms think tank, fears that stagnant competition will adversely affect the development of fifth-generation technology in the country, which the government is trying to promote.

The current telecoms crisis was sparked by the government winning the Supreme Court ruling in October, but ironically, it is now in desperate need of a breakthrough with the industry to prevent further fallout.

As noted by Uppal, "the government has become a victim of its own victory."