"Our current task is to cement the No. 2 position in the global market," founder and CEO Lei Jun said Tuesday. "We aim to become global No. 1 in three years."

Lei was giving his annual speech during an online company event as Xiaomi celebrates the 10th anniversary of its first smartphone launch.

Lei noted that during a forum back in 2014, he had pledged to make Xiaomi the world's top smartphone seller in five to 10 years. This idea was challenged by an Apple executive who attended that panel, he said.

But Xiaomi's promising smartphone sales in recent quarters suggest it was not an empty promise, the CEO said.

"I still remember [the Apple executive] said publicly that it is easy to say but it's much more difficult to do," Lei recalled. "I responded to that awkward situation and said, 'What if it really comes true?'"

Xiaomi has grabbed market share from compatriot Huawei Technologies both in China and overseas. Huawei temporarily ranked as the top smartphone maker globally in 2020, but its access to American technologies has been restricted by the U.S. government since last year.

Lei said Xiaomi secured the top smartphone position in Europe for the April-June period ahead of Samsung and Apple and also became the leading player in more than 20 countries and regions. 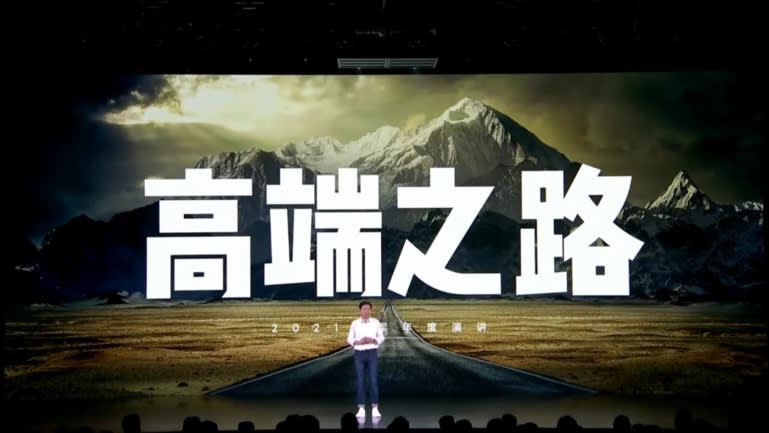 The Chinese company on Tuesday night launched a wide range of new products, including its latest premium smartphone Mix 4, a new TV, tablet, smart speaker and the CyberDog -- its first four-legged companion robot. Xiaomi looks to illustrate its tech prowess with the foray into advanced robotics.

The Mix 4 targets the high-end handset segment and adopts the 5G Snapdragon 888+ mobile platform, the most premium offering by U.S. chipmaker Qualcomm.

In the first half of this year, Xiaomi's smartphone shipments reached 101.7 million units, growing more than 75% on the year, according to research company IDC. Xiaomi achieved a global market share of nearly 17% in the April-June quarter, just below leader Samsung's 18.8% and ahead of Apple's 14.1%, the data showed.

Xiaomi has geared up to place aggressive orders for components to make as many as 240 million smartphones during 2021, Nikkei Asia reported earlier, in the wake of the unprecedented global chip crunch and the company's ambition to expand market share.

Like Huawei, Xiaomi was once flagged as a security threat by the administration of former U.S. President Donald Trump. It was blacklisted by the Pentagon at the beginning of this year over allegations of links to the Chinese military, which the company denies. Xiaomi in May won a lawsuit in the U.S. to be removed from the blacklist, which would have led to a delisting from U.S. exchanges and deletion from global benchmark indexes.

Xiaomi, founded in 2010 by Lei, is renowned for its cost-effective handsets with high-end electronics that Apple and Samsung also use, as well as its marketing strategy to organize fan clubs and activities that lure young and price-sensitive consumers.

The Beijing-based company has ventured into other consumer electronics including smart TVs and Internet of Things devices such as smart vacuum cleaners, wearables and smart speakers. Xiaomi has successfully built a product ecosystem.

Lei, once called the "Steve Jobs of China" by the local industry, in June announced that Xiaomi will spend $10 billion to tap into electric vehicles. He will personally lead the new business.

Xiaomi shares an ambition with its Chinese tech peers Huawei, Oppo, Alibaba Group Holding and Baidu to build its own semiconductor capability, and the company has increased investments in domestic chip-related companies during the past few years, Nikkei reported earlier.