KUALA LUMPUR -- State-backed telecommunications company Telekom Malaysia has launched Viu, a video-on-demand service from Vuclip, as it tries to grab a share of the increasingly lucrative market for video downloads. 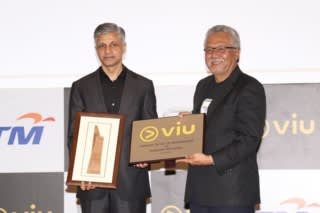 Viu viewers in Malaysia will have access to a variety of mainly Asian content through broadband connections provided by Telekom Malaysia, which is trying to prop-up its data revenue as demand for its voice services declines.

In December, Malaysia Telekom began working with iflix, a local video-on-demand provider. It also has its own Internet TV service, HyppTV, offering a mix of local and international content, along with radio and video-on-demand programs.

Viu was first launched in Hong Kong last year, and in Singapore last month. It promises to deliver over 10,000 hours of premium Asian content this year, a third of which will be the latest Korean drama and variety shows, including "Oh My Venus," "Moorim School" and "Six Flying Dragons."

"Further to the exciting content available on our HyppTV platform, our broadband customers will be thrilled to enjoy this unique variety of the latest Korean, Chinese, Bollywood, Tamil, Indonesian and Malaysian programs," said Zamzamzairani Isa, Telekom's CEO in a press release on Monday. All Viu programs broadcast in Malaysia will include English, Malay and simplified Chinese subtitles.

The start of the service comes on the heels of U.S.-based streaming service Netflix's global launch earlier this year.

Other competitors include Astro Malaysia Holdings, the country's largest pay-TV operator, which has its own video-on-demand service that lets viewers record programs through its set-top box. It also offers downloadable content through its mobile app. Astro's on-demand offerings reaches 252,000 connected personal video recorders, and the company's mobile app has been downloaded 1.8 million times since its launch in October 2015.

Viu is available on Android devices as a "freemium" app in Malaysia. For premium content, consisting of the latest programs, the service costs 10 ringgit ($2.40) per month. With the partnership, Malaysia Telekom's broadband customers will be able to access Viu as part of their subscription, starting in mid-March.

U.S.-based Vuclip is controlled by PCCW Media, a unit of PCCW, a Hong Kong telecommunications company. It provides video-on-demand services in emerging markets, with 9 million subscribers in nine countries.