Men use their smartphones at the ChinaJoy in Shanghai on July 27.   © Reuters
YUSHO CHO and WATARU KODAKA, Nikkei staff writersAugust 8, 2017 15:56 JST | China
CopyCopied

SHANGHAI -- China's gaming market, now the world's biggest, is growing larger still. But the landscape is still subject to the vagaries of the one-party state, which is now scrutinizing what it calls a poisonous gaming culture.

'King' of the hill 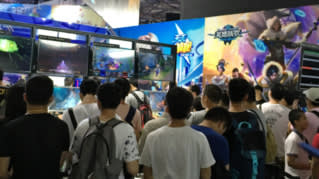 Fans crowd a Tencent booth July 28 during the ChinaJoy gaming expo in Shanghai.

Tencent Holdings' huge section took up a quarter of one hall and drew the most fans, with daily traffic likely surpassing 10,000 people. Crowds massed in particular for competitive gaming events featuring "Honor of Kings," a multiplayer beat-em-up made for smartphones.

China's gaming market surged to $24.6 billion in 2016, according to Dutch industry consultancy Newzoo, surpassing the U.S. for the first time. The figure is expected to jump to $27.5 billion, which would create a larger gap with America's projected $25.1 billion market.

The Chinese mobile gaming market stands to rocket to $14.6 billion in 2017, more than double the $7.1 billion figure two years ago. Mobile games captured 46% of the entire gaming market last year, a share destined to top 60% in 2020. Tencent's "Honor of Kings" was a huge draw at the ChinaJoy game expo in Shanghai on July 28.

"Honor of Kings," which launched in late 2015, has especially gone viral. The smash hit took in more than 5 billion yuan ($744 million) during the first quarter of this year, making it the company's core title.

The game also meshes well with WeChat, Tencent's ubiquitous instant messaging app. The way real-life friends can band together to vanquish virtual enemies through the two platforms is a major draw for "Honor of Kings."

Although the game is free to download, spells, weapons and other items needed to improve one's skill come at a cost. The in-game store has prices ranging from a few dozen yuan to a few hundred.

"I spend over 10,000 yuan a month on items," said a Shanghai corporate manager who came to ChinaJoy.

"If I become stronger, I will be able to brag to friends on social networking sites," a 24-year-old man reasoned.

Rivals on the rise

Tencent rode the red-hot mobile game market to a share approaching 50%. NetEase comes in second at 20% by leveraging the popularity of "Onmyoji." One of "Honor of Kings'" closest rivals, "Onmyoji" is a mystical fighting game set in medieval Japan. This title is set apart by using Japanese voice actors even in the Chinese version.

China is home to more than 500 million gamers, but per-capita usage fees only amount to around $45 annually -- a third of those in the U.S. Although the income gap between the two countries prevents any direct comparisons, the Chinese metric is catching up, creating plenty of margin for growth, according to Guolian Securities.

Japanese game producers are expending resources to grab a piece of the growth market. Bandai Namco Holdings will soon be launching "Mobile Suit Gundam" and "Dragon Ball" games for smartphones. At Bandai's 700-sq.-meter booth at ChinaJoy, a step up from last year, gamers stood in long lines to try out the Gundam title.

Sanrio, the company behind Hello Kitty, is teaming up with Tokyo-based Access Bright Japan to develop a mobile game for the Chinese market featuring that character. Access Bright also streams the hit anime movie "Your Name" in the mainland.

The hidden hand of the state

Chinese state authorities are taking a dim view of the nation's gaming boom. Early last month, the People's Daily ran pieces singling out "Honor of Kings" for making children addicted to gaming. The newspaper, regarded as the official mouthpiece of the Chinese Communist Party, brought up the case of a 13-year-old boy who reportedly attempted suicide by jumping off a balcony after his father scolded him for spending too much time playing the game.

Tencent must show social responsibility, declared the People's Daily. The Hong Kong market sent Tencent's stock sinking 4% upon the publication of the criticism. The company later started limiting children under 12 to one hour of gameplay per day. Those between 12 and the age of majority are allotted only two hours.

At this point, the self-imposed controls' effect on earnings will be limited since underage players do not spend that much money in-game, said Bocom International Securities. But this turn of events could pave the way to more drastic measures.

Chinese officials are prioritizing social stability before the twice-a-decade Communist Party congress this fall, where the top leadership is chosen. They even banned videos from streaming on Weibo, China's microblogging answer to Twitter, among other platforms, this June.