SAKAI, Japan - Chairman Terry Gou of Hon Hai Precision Industry on Saturday said he is determined to make Sharp profitable again. He also acknowledged the globe's sluggish economic growth, saying it will make his challenge all the more difficult.

Gou used the occasion to confirm his firm commitment to turning around the troubled Japanese electronics maker. "I am a major investor, giving my personal money, so I want [Sharp to be profitable] more than you," Gou said in answering a reporter's question.

Gou's statement came three days after the boards of Hon Hai, commonly known as Foxconn Technology Group, and Sharp approved a 388 billion yen ($3.5 billion) purchase of a 66% stake in Sharp. With Sharp expected to have suffered an operating loss of 170 billion yen for the past fiscal year, there are widespread concerns on how Foxconn plans to boost an entity on the brink of collapse. Hon Hai, two subsidiaries and Gou's personal investment arm are combining to make the purchase. Gou is paying out of his own pocket and will end up with an 8.85% stake in Sharp.

The Taiwanese tycoon did not elaborate on when he may be able to staunch the bleeding at Sharp, only saying he has a plan.

"I learn from Japanese culture," Gou said. "If I can break even in two years, I will say in four years. Two years or four years -- I will be more conservative. But yes, our road map is in my heart."

The timing of Sharp's turnaround is becoming a critical issue within Foxconn, a source said. Some executives, trying to bolster their standing in the group, have proposed to Gou that they can help Sharp break even within a year, according to the source.

Gou said his turnaround efforts will include boosting Sharp's operational efficiency and production capacity. In addition, the brand is to develop connected device technologies for use in smart homes. Also, investments will be made in advanced display, camera and sensor technologies.

As for smartphone displays, Gou said he wants to help develop Sharp's advanced indium gallium zinc oxide, or IGZO, display technologies to compete against active-matrix organic light-emitting diode, or AMOLED, technologies owned by South Korea's Samsung Electronics and LG Display. He said he is confident about pulling this off in a year's time.

While IGZO is known to be used in large- and mid-size panels, it is not a technology mature enough for the small panels used on smartphones. 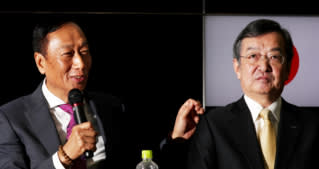 There has been speculation that Apple next year will begin adopting AMOLED technologies for its iPhones. Sharp could lose Apple orders.

Gou acknowledged global economic headwinds may be working against him.

In pursuit of some good luck, Gou and senior Foxconn executives held a simple worship ceremony at a Japanese shrine on the Sakai Display Products campus before signing the deal.

Takahashi said Foxconn will be able to help improve Sharp's financial conditions and that the two sides want to work together on connected devices and robotics.