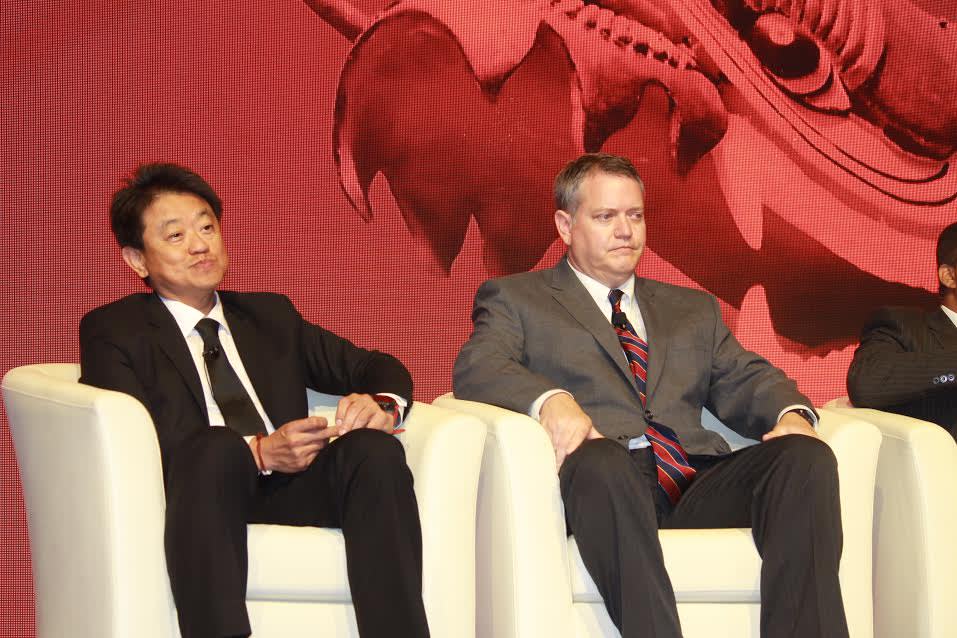 Narongchai Wongthanavimok, left, chief financial officer at Thai Airways, says the airline is considering funding in other currencies to offset the impact of a stronger dollar. (Photo by Jennifer Lo)

HONG KONG -- Thai Airways International is looking at financing in Japanese yen and other currencies to reduce costs and offset the impact of a stronger U.S. dollar on its earnings.

Thailand's flagship carrier pays nearly half of its operating expenses, such as fuel and aircraft leasing costs, in U.S. dollars. However, it makes just 6% of its revenues in dollars.

"We are trying to address this [currency] mismatch by funding in Japanese yen," said Narongchai Wongthanavimok, chief financial officer at Thai Airways on Wednesday, without disclosing a target. The airline is also eyeing other non-dollar currencies for financing.

"I guess the liquidity is there but pretty much in U.S. dollar and euro," Narongchai said at a conference in Hong Kong, adding that carrying high dollar-denominated debt at a time of rising U.S. interest rates is creating "stress" for the group.

In 2012, Thai Airways closed its first funding of an Airbus A380-800 aircraft in yen. Some analysts say yen financing makes business sense for the airline, which derives about 9% of its revenue in the currency last year as it added more routes to Japan.

To trim costs, the airline is counting on cross-currency swaps -- turning dollar debt to other currencies with better interest rates, such as Swiss francs at a negative interest rate last December. With the mechanism, it aims to reduce funding costs by 3 billion baht in the next four to five years, Narongchai told the Bangkok Post in February.

Narongchai said competition among lessors would allow more funding options and "breathing room" for Thai Airways. "With more Chinese and Japanese lessors and investors, this simply means more liquidity in the market," he said.