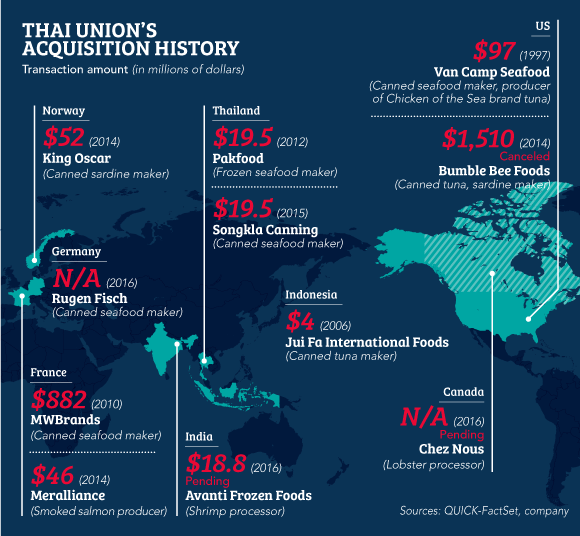 On July 5, Thai Union announced the acquisition of Les Pecheries de Chez Nous, a Canadian lobster processing company based in New Brunswick. It was Thai Union's first acquisition in North America since it was forced to scrap a $1.5- billion buyout plan for Bumble Bee Foods in December. The much smaller Canadian company has annual revenue of 50 million Canadian dollars ($38 million).

The deal came just five days after the U.S. government released its Trafficking in Persons (TIP) report on June 30. Thailand was upgraded from the bottom tier three to tier two on a watch list after being downgraded in 2014 along with countries like North Korea and Syria. 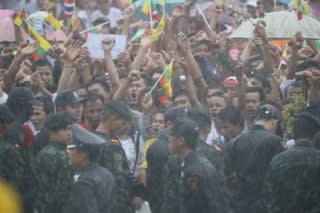 Migrant workers from Myanmar gather in Samut Sakhon near Bangkok, a center for seafood processing. (Photo by Keiichiro Asahara)

Thailand's poor showing in the trafficking league table has overshadowed Thai Union's growth and sustainability prospects. The company is seen by many as representing the entire local fishing industry.

TIP tier three countries are not immediately subject to trade sanctions, and the U.S. government has yet to directly penalize problem countries. Thai Union has come under pressure because mostly Western human rights and non-governmental organizations have picked up on the issue and called for consumer boycotts.

Greenpeace, a London-based environmental pressure group launched a campaign in October 2015 calling on Thai Union to take "urgent and far-reaching steps" to eliminate labor abuse. It urged consumers and investors around the globe to avoid Thai Union canned tuna, and some retail companies in the U.S. have responded.

Meanwhile, the European Union issued a yellow card to Thailand last year over illegal, unreported, and unregulated fishing. The EU, which accounts for about 30% of Thai Union's total revenue, could ban imported seafood from Thailand if it sees no progress.

Thai Union implemented a traceability program in 2014 to try and ensure vessels supplying it complied with labor regulations and delivered proper remuneraton and benefits to employees. In 2015, the company issued directives on business ethics with a code of conduct for labor.

In the last 18 months, the company has terminated dealings with 17 suppliers for forced labor and human trafficking violations. It has also stepped up prosecutions and convictions for offenders. Tier two watch list grading is for countries that fail to meet minimum standards but are making genuine efforts to improve. Neighboring Myanmar was demoted to tier three in the latest TIP report.

"The upgrade is good for the whole food sector in Thailand because it can export more to the U.S.," Naree Apisawaittakan, an analyst at Phillip Securities (Thailand) told the Nikkei Asian Review. She cautioned, however, that the negative effect of the U.K.'s Brexit decision to leave the European Union "offsets the positive impact of the upgrade". In the case of Thai Union, investor concern over Brexit hinges on the fact that about 30% of its total revenue comes out of Europe.

The TIP upgrade puts Thai Union back on the M&A track after a seven-month hiatus since the Bumble Bee failure. "The upgrade clearly helps the reputational factor when pursuing M&A activities as it helps when the reputation of Thailand as a leader in seafood sustainability is recognized," Chief Financial Officer Joerg Ayrle told the Nikkei Asian Review. "It makes discussions easier and convinces partners of our direction and strategy. However, we remain committed to both the US and Western Europe."

Thai Union announced its plan to acquire Bumble Bee in December 2014. At the annual general meeting in April 2015, Chief Executive Thiraphong Chansiri said the Bumble Bee investment would be a turning point that greatly strengthened Thai Union's North American presence. He predicted it would help the company reach its target for sales of $6 billion in 2016, and $8 billion in 2020.

Thai Union lost the Bumble Bee deal to antitrust concerns raised by the U.S. department of justice in December 2015. "Consumers are better off without this deal," the department said in a statement. It pointed out that the acquisition would give Thai Union the second and third largest companies selling shelf-stable tuna in the U.S. -- a market long dominated by three major brands. Beyond the monopoly worry, some analysts suspected human trafficking concerns played in the justice department's ruling. 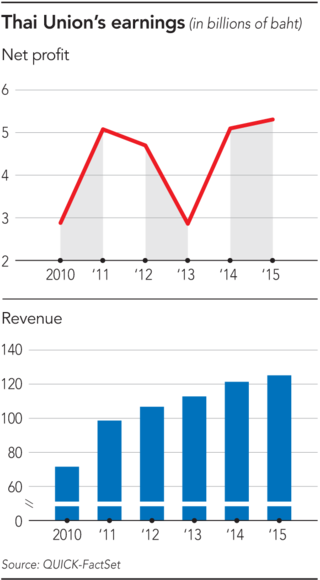 Thai Union's shares fell 2.6% on Dec. 4 with news of the Bumble Bee acquisition failing, and continued to decline when the impact on the company's growth prospects became clearer.

Since starting out in 1977, Thai Union has grown through aggressive acquisitions. Its revenue in 2015 was 127 billion baht ($3.6 billion) -- almost three times the figure for 2005 -- and more than 90% of this was from outside Thailand. Its flagship brands include John West, which has a 37% share of the U.K. market, and Norway's King Oscar, which Thai Union acquired in 2014 and has a 79% share of the canned sardine market in the U.S., according to the company. Thai Union bought France's MWBrands in 2010 for $883 million.

Despite its problems, Thai Union is sticking to its targets. "The management team and our CEO are committed to reach $8 billion by 2020," Ayrle, the chief financial officer told the Nikkei Asian Review. "I am confident that we are on the path to achieve this goal and fulfill our objectives."

Despite the Bumble Bee setback, Thai Union has been performing solidly. It earned a net profit of 5.3 billion baht in 2015, a 4% rise year on year. Share prices have been rising since January, and most analysts are predicting 23.5 to 25 baht.

In May, after the Bumble Bee failure, Ayrle said the company is not looking for"very, very" large targets. "At this stage, I am doubtful that we are looking at acquisitions that large," he said. Outside North America, Thai Union has recently acquired the majority stake in Germany's Rugen Fisch, and a minority interest in India's Avanti Frozen Food is pending. 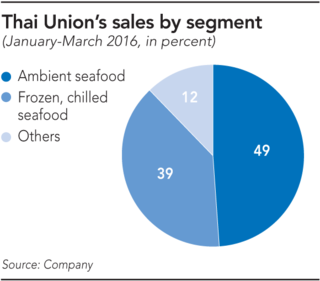 The purchase of Les Pecheries de Chez Nous could be indicative of things to come. "If there are targets which fit Thai Union, we do try to look at them," Ayrle told the Nikkei Asian Review in early July. "Our key focus remains Eastern Europe, emerging markets, and countries and businesses where we do not hold a strong market presence, along with some Asian and Latin American markets."

Thai Union's determination to raise its profile through acquisitions is backed by the growth prospect of seafood demand. Given the world's growing population, people are looking more to seafood as a source of protein. According to estimates from the United Nations' Food and Agriculture Organization, world fishery production will increase 17% by 2025 beyond the average for 2013 to 2015, which suggests plenty of room for Thai Union to grow.

On the production side, environmental and human rights issues will increase the number of companies coming up for sale. A number of Western companies are to be sold because of the increasingly risky nature of the business. Thai Union and Norway's Marine Harvest are seen as the leaders in international consolidation of the industry, and in the last five years have announced 14 and 9 acquisitions respectively, according to QUICK-FactSet.

Thai Union's dominant position has inevitably attracted the attention of Western governments and activists, particularly when the company's supply chain failed to stand up to scrutiny when it came to the labor and human rights.

In its Modern Slavery Act Transparency Statement 2016, the company conceded the risky nature of its business. The company sources its six main seafood categories -- cephalopods (octopus and squid), mackerel, salmon, sardine, shrimp, and tuna -- through both wild capture in the oceans and aquaculture operations. The industry is labor intensive throughout, and susceptible to abuse, particularly because of its long and complex supply chains.

Despite the more encouraging noises from the U.S., there are still plenty of critics. Sam Zarifi, the Asia-Pacific director at the International Commission of Jurists (ICJ) told the Nikkei Asian Review: "Recent media reports show that there are still real problems with slave-like practices and human trafficking in the fishing industry, where Thai Union and its suppliers are major players. We can expect that pressure on the company will continue, directly and indirectly through pressure on its clients like Walmart." "The upgrade gives it some space to show that it can and will clean up," Zafiri said, noting that the ICJ does not itself monitor companies for their labor practices.

Meanwhile, on June 24, just days ahead of the more favorable TIP report, Greenpeace posted on its blog: "This year we want the Indian Ocean to peacefully tackle unsustainable fishing by the world's largest tuna company, Thai Union."

Thiraphong told the Bangkok Post in May that once Thai Union achieves its revenue target of $8 billion by 2020, the next goal will be to survive for a century.

Thai Union knows sustainability is in question and that unending growth through acquisitions is not viable. In its sustainability report, it said it wanted to be known as "an organization with good corporate governance, integrity and accountability to all stakeholders, and to achieve sustainable business growth".

It hired Darian McBain in July 2015 as group director of sustainable development, reporting directly to the chief executive. She has developed corporate social responsibility programs, including teaching English to migrant children.

Thai Union is destined to keep evolving by modernizing its management and practices to fend off the concerns of industry watchers -- just like the tuna that never stop swimming to survive.