Thai craft brewers take on Singha, Chang -- and the law 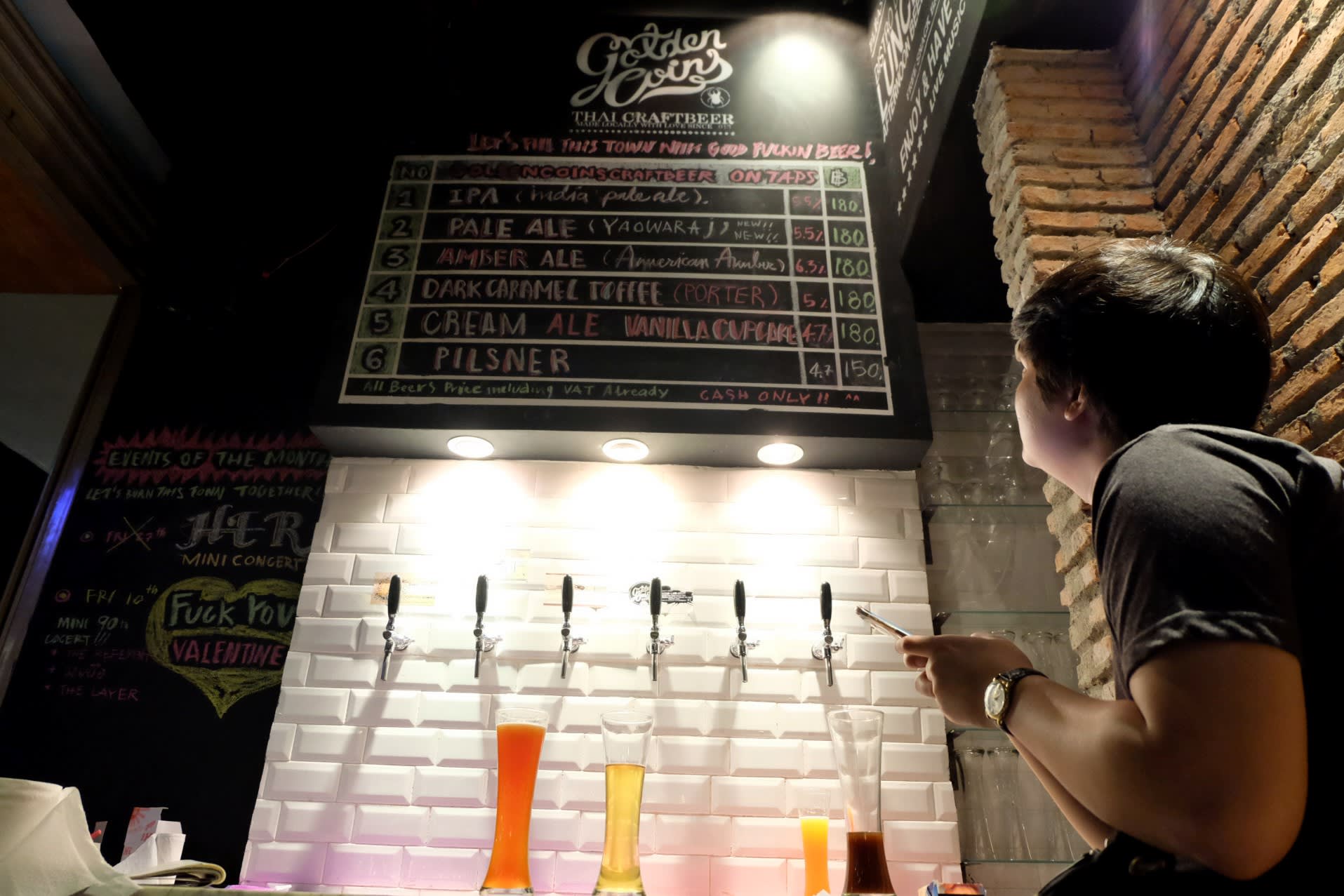 The Thai beer market is dominated by Boon Rawd Brewery and Thai Beverage, the brewers behind the Singha and Chang brands. Restaurants and bars that serve craft beer and other alternatives are sprouting up around the country, but meeting increasingly diverse consumer tastes has its pitfalls.

One man serving up distinctive suds is Piek Pipatnapon, owner of the Golden Coins Taproom. The craft beer bar, nestled among restaurants in Bangkok's Ekkamai neighborhood, opened at the end of last year. Crowds start forming around an outdoor counter at about 6 p.m., when the bar opens. Six beers are on tap.

A 22-year-old Thai university student who was drinking alone said the beers are a little pricey, but the unique flavors make it worthwhile to come back once or twice a week. A 40-something British tourist was just happy to sample something other than Singha and Chang, for a change.

Piek said craft beer started to catch on in Thailand a few years ago. His solution for getting around the liquor law was to do his brewing in Vietnam. He shelled out a few million baht -- tens of thousands of dollars -- from his own pocket to open a brewery in Ho Chi Minh City. He is responsible for the flavors and visits the factory several times a month; he said it is an ongoing challenge to adjust his recipes to reflect feedback from customers.

Costs are another challenge: Transport expenses and import levies of up to 60% really add up.

Brewing companies in Thailand are obliged to produce more than 10,000 kiloliters a year and hold over 10 million baht ($286,000) in capital, according to the current law and official notices. Those who wish to sell homemade brews and individually managed stores must produce at least 100kl a year.

The primary objective is to prevent home brewers from dodging tax payments. But critics of the law say it locks small, independent brewers out of the domestic market.

Other countries have tweaked their regulations to accommodate the craft craze. Japan, for example, lowered the minimum brewing amount from 2,000kl a year to 60kl after revising its alcohol tax law in 1994. In Thailand, though, official pressure seems to be mounting.

Political unrest has prompted authorities to try to rein in alcohol consumption, such as by raising the tax on booze. The current military administration is also beefing up punishments for those who violate the home brewing rules.

Piek said a bar he ran in Bangkok's Chinatown, which served independent brews, was raided by police and forced to shut down in 2015.

The arrest of a brewer in his 20s has added fuel to the debate over the law. One Thai newspaper estimated that the country now has a few hundred craft brewers, up from about 10 just three years ago. Most are operating illegally; some are individuals who work out of their own kitchens.

For now, to distribute legally in Thailand, brewers essentially need a plant outside the country or an overseas partner working under an original equipment manufacturer arrangement. The Thai craft beers found at the country's bars are often brewed in Australia, Taiwan and Japan.

And yet, the craft segment is a rare bright spot in Thailand's otherwise shrinking beer market. Preliminary figures from British research company Euromonitor International show that beer sales in the country fell 1% on the year in 2016, to 1.85 million kl. This marked the fourth straight annual decline.

Craft beer sales, on the other hand, are rising every year and are estimated at 10,000kl. That is still a drop in the bucket, but demand for unique beer is clearly growing.

The big brewers appear keen to cash in while the law is working in their favor. Boon Rawd last year began selling U Beer, a craftlike brew, on a trial basis at selected retailers of imported beer. Thai Beverage recently decided to revamp Federbrau, a domestically produced, premium German-style beer.

Piek, however, argued that mass production cannot create the flavors that make craft beer so sought-after.