BANGKOK -- Thailand's Central Group will spend some 350 million baht ($10.3 million) to remodel its department stores in the country, offering a fuller range of services to keep customers staying longer and spending more.

The retail heavyweight will add eateries, salons and educational facilities, as well as events such as art exhibitions, according to a plan announced Wednesday. While the number of visitors to Thai department stores has fallen as more people do their shopping on trips abroad, per-customer spending is on the rise, according to Yuwadee Chirathivat, CEO of unit Central Department Store Group. 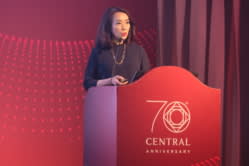 The company will also retool its smartphone apps to stoke online sales as more shoppers turn to the internet.

The department store unit has purchased a number of well-known European chains in recent years, including Italy's La Rinascente. Overseas operations now account for about 40% of sales. But foreign acquisitions are on hold for the time being as the company puts its resources into bolstering the performance of existing stores, Yuwadee said.

This year marks the 70th anniversary of Central's founding, presenting the company with an opportunity to modernize its image. The department store unit's logo is also set for a redesign, with the rose motif to be replaced with a clean geometric pattern and simple block font.