TOKYO   The recent series of earthquakes in Japan's southwestern main island of Kyushu demonstrated its crucial role in international manufacturing supply chains. The island, at 35,640 sq. kilometers the size of Taiwan, and with a population of 13 million, is home to a number of factories for electronic devices and automobile parts, which are Japan's most competitive fields. Thanks to its plentiful and inexpensive real estate, clear water, and relatively cheap labor, as well as its proximity to the rest of Asia, Kyushu has become a key manufacturing hub. Although not all plants suffered damage in the quakes, manufacturers now face the challenge of how to maintain stable supply chains in case of future disasters.

On April 18, the first trading day after the strongest of the quakes on April 16, Sony's share price rapidly dropped, by 7.8% from the previous trading day, in just 11 minutes. The price ended down 6.8%, compared to the 3.4% drop of the Nikkei Stock Average as a whole.

Sony's price track apparently reflects investors' anxiety over its plant suspension in Kumamoto, near the epicenter of the quakes. The plant produces complementary metal oxide semiconductor image sensors for digital cameras, and since Sony sensors are widely used for smartphones, including Apple's iPhone, there was speculation about a negative impact on iPhone production.

"Operations at Kumamoto Technology Center, which primarily manufactures image sensors for digital cameras and security cameras as well as micro-display devices, were halted after the earthquake on April 14, and currently remain suspended," Sony said in a news release on April 18, clarifying that smartphone devices are not the main product of the Kumamoto plant.

Taiwanese smartphone-related companies might have worried the most about the impact of Sony's production suspension. However, Rick Hsu, a Taipei-based analyst at Daiwa-Cathay Capital Markets, said, "The quake in Kumamoto should have limited impact on the global smartphone supply chain." In fact, Sony has three other semiconductor plants in Kyushu -- in Nagasaki, Oita and Kagoshima -- and the company said the Nagasaki plant, which quickly resumed production after halting temporarily, is the main producer of image sensors for smartphones.

Although the impact of Sony's plant suspension on smartphone production appears to be limited, its reliance on Kyushu might pose a risk to smartphone supply chains in the future. Sony is estimated to have a roughly 40% worldwide market share for CMOS image sensors. Sony operates four CMOS plants in Japan, three of them in Kyushu.

MANUFACTURING CLUSTER   Including semiconductor makers, a number of well-known Japanese manufacturers have plants in Kyushu. They cluster on the island because it has plenty of land and clear water, which is necessary for semiconductor production, and cheaper labor. Japanese electronics makers set up semiconductor plants on the island starting in the 1960s, and cultivated local suppliers. As a result, Kyushu is often called "Silicon Island."

As of 2014, there were 892 semiconductor-related companies in Kyushu, and the island had a 28% domestic share of integrated circuit production by value, according to the Kyushu Bureau of Economy, Trade and Industry. "Although Japanese makers gradually gave up semiconductor production after 2000s, some local suppliers [to semiconductor plants] have been able to stay by expanding overseas sales channels," Tomoo Otani, senior researcher at local think tank Kyushu Economic Research Center, told the Nikkei Asian Review.

Some other conditions also made Kyushu an attractive place for manufacturers: It is surrounded by sea and has several big seaports; each of the seven prefectures on the island has an airport; it is close to Asia; and -- until now -- it had fewer earthquakes than the rest of the country.

Aside from semiconductors, Fujifilm Holdings, for example, produces protective film for polarizing films, which is indispensable for LCD production, in Kumamoto; the plant there has a more than 40% worldwide share for the material. The factory shut down after the first quake on April 14. On April 18, the company said it could not predict when it would resume operations and it would keep supplies as normal as possible by using up inventory and producing at other factories. 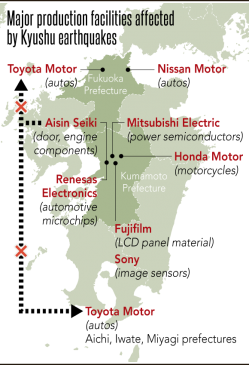 As for auto manufacturing, Kyushu's other major industry, Toyota Motor suspended major plants in Japan because its major supplier Aisin Seiki's Kumamoto plant was hit hard by the earthquake and the supply chain was cut. This shows how parts production in Kyushu affects the world's largest automaker's entire domestic production.

The damage extends beyond just factories. The earthquakes also damaged highways, which are essential for shipping products. As of April 18, six segments of highways in Kyushu were closed due to cracked roadways, landslides and other damage, and full recovery will take a long time.

Many plants on Kyushu have connections to the rest of the world. For example, Nissan Motor exports knockdown kits, which contain the parts needed for final assembly of cars, to South Korea's Renault Samsung Motors from its plant in northern Kyushu. According to Nissan, the supply chain is working as normal, though the plant was temporary shut down after the quakes.

Some manufacturers resumed operations in the days after the quakes; some are considering producing at other facilities outside Kyushu or expanding consignment production so they can keep their supply chains secure.

Some companies are applying the lessons learned after the Great East Japan Earthquake in March 2011. Renesas Electronics, which produces automotive microchips in Kumamoto and halted operations on April 14, had kept its inventory levels higher than in 2011 and has the option of producing at other factories. In 2011, one of the company's key facilities in Ibaraki Prefecture in East Japan shut down for nearly three months after the earthquake, wreaking havoc on production at many automakers.

KEY LESSONS   Overall, the actual damage to supply chains was not severe, and companies are recovering. The important lesson from the Kyushu disaster is that global supply chains of major worldwide consumer products -- such as electronics and automobiles -- can be severely affected if a strong earthquake hits the island.

Moreover, the Kyushu earthquakes remind us that a single disaster in one key area can affect manufacturing around the world. It is not only Kyushu that faces this challenge -- any area should be concerned about it.