The Publicity Department: the Communists' medium for controlling messages

BEIJING -- China makes a dramatic impression on the big screen. Countless Hollywood films have used the country's shimmering skyscrapers and breathtaking landscapes as backdrops. In these panoramas, the world sees a nation that is energetic and sophisticated -- indeed, a nation with the world's No. 2 economy.

Zoom in, and one will be reminded that for all its achievements, the country is still dominated by a single party that wants to control what people say -- and what the rest of the world thinks about China.

One need not look far for signs of the Chinese Communist Party's pervasive presence. Flapping at the feet of those modern buildings are banners with slogans praising the party.

Censorship runs deep. It is no secret that Chinese authorities ban citizens from accessing Western social media platforms such as Facebook and Twitter. But few are probably aware that, until a few years ago, the word "Christmas" was off limits for those appearing on state broadcaster China Central Television, since the word is tied to a specific religion.

Newspapers, movies, TV shows, books and the Internet are all supervised by the party's Publicity Department and its arm, the State Administration of Press, Publication, Radio, Film and Television.

The CCP established the predecessor of today's Publicity Department in 1924, three years after the party's formation. Put another way, the department's history is interwoven with that of the party itself. The division's propaganda helped the party gain public support, fight a war of resistance against Imperial Japan and prevail in the civil war against the Chinese nationalists, or Kuomintang.

Xi Zhongxun, a former deputy premier and the father of current Chinese President Xi Jinping, served as chief of the department in the 1950s.

The department plays a key role in the CCP's strategy for dealing with adversaries, known as the "three warfares" concept: media warfare, psychological warfare and legal warfare. Of the three, the party places a lot of weight on the media war, in which it attempts to get global opinion on its side.

Consider the full-spread advertisement placed in the New York Times and other publications by China Daily, an English-language newspaper under the Publicity Department's purview. The ad criticized Japan over its control of the Senkaku Islands -- islets in the East China Sea that are claimed by China, which calls them Diaoyu. Some experts saw this as part of Beijing's media war.

Some of China's public relations salvos are more positive, if not exactly subtle.

State-run news agency Xinhua in 2011 leased prime advertising space on an iconic building in New York's Times Square. The electronic billboard, near the top of the building, displays images of scenic spots in China and high-profile Chinese individuals around the clock.

Just as it seeks to project a certain image of China to the world, the Publicity Department restricts the images and messages that come from the outside world into China.

One way it does this is by restricting foreign film releases. Officially, the policy is aimed at fostering the domestic movie industry. In reality, the department blocks films with religious content and those that might be otherwise inconvenient to the CCP.

Currently, China permits 34 foreign films to be released in the country each year. Prior to 2012, the quota was 20. The state administration checks the content of each film. Some are rejected outright; in other cases, the administration calls for partial changes.

The latter happened with "Skyfall," the James Bond flick released in the U.S. in 2012. The Chinese release was delayed until 2013 because the authorities demanded that several China-related scenes be cut. One, for example, had the villain talking about torture by Chinese security officers. 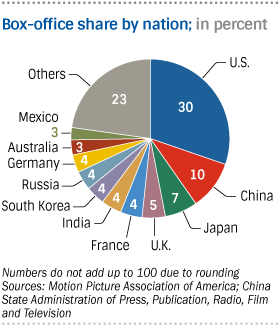 Some Chinese citizens are aware that this sort of thing happens. Despite government efforts to control the Internet, microblogs buzzed with complaints about tampering with "Skyfall." "It would be much better to see a pirated DVD of the original version shown overseas," read one comment.

In certain cases, Hollywood tries to tiptoe around Beijing, only to get locked out anyway.

This happened with "World War Z," a thriller starring Brad Pitt. The film was based on an apocalyptic novel in which a zombie-creating infection originates in China. The movie version avoids referring to any specific country as the source of the pandemic, but the Chinese censors rejected it all the same. Beijing seems to have blacklisted Pitt because he also starred in the 1997 film "Seven Years in Tibet," which was critical of China's takeover of the territory.

As the Chinese market grows ever more important for Hollywood studios, such censorship does seem to have reduced the number of films that regard China with hostility. In this sense, it appears Chinese authorities have achieved their aim.

There are indications that regulation of speech has actually grown stricter since Xi & Co. took the reins of government.

Li Liang, 24, recalls sending a message in late June over the Japan-based Line mobile chat service. Apparently because he had typed the name Xi Jinping, he received a warning that the system "cannot transmit any content that violates law." He wondered whether mentioning the leader of his own country could really be illegal.

Other users, perhaps, were using the wrong words, too. Line went dead in China on July 2. It has not be restored.

The Xi government also took a stern approach in dealing with the 25th anniversary of the Tiananmen Square crackdown in 1989.

Prior to the the anniversary, authorities detained a number of reform-minded intellectuals. Pu Zhiqiang, a prominent human rights lawyer, was one of them. Scores of people with connections to him were also rounded up with no immediate explanation.

The CCP essentially bans public discussion of the crackdown on student demonstrators. Pu had participated in a study meeting that looked into the truth about it.

Eventually, Pu was formally arrested on charges of "picking quarrels and creating a disturbance." He has yet to be freed.

Xi speaks of the "Chinese dream," a slogan meant to inspire the public and propel the country to greater power. Many citizens, though, seem to feel the government's dream is tighter regulation of the people. They get that impression when they see popular blogs shut down one after another, apparently because the bloggers said what was really on their minds.

Millions have spoken with their feet. A Chinese report on international immigration said about 3.85 million citizens left the country in the 14 years through 2013.

When American director Oliver Stone, known for highly political films such as "Born on the Fourth of July," appeared at the Beijing International Film Festival in April, he did not hold his tongue. Stone said China would never have a world-class movie culture unless the censorship stops. Though Chinese studios are keen to work with their Hollywood counterparts, Stone also suggested there cannot be true collaboration until the authorities let artists look critically at Chinese history.

His remarks drew applause from the audience. But how did the CCP leadership respond to Stone's comments?

They didn't. Chinese media made no mention of what the director said.